The Saint Charles Borromeo Seminary had the privilege of hosting Pope Francis for a night when he arrived in Philadelphia.

“I think the mood before he came was one of anticipation and unknowing,” said Deacon Matthew Biedrzycki.

“While he was here, it was an overwhelming reality that this was the person you’d seen on TV, and now seeing him pull up the driveway and step out was just amazing,” continued Biedrzycki (below). “And when the Pope visits your house, where do you go from there? Monday and Tuesday (after the visit), we’re just unpacking the power of that moment and what is that going to mean for the church and what’s that going to mean for the nation going forward. But it was powerful and it laid seeds, and it’s going to grow now and in the future.” 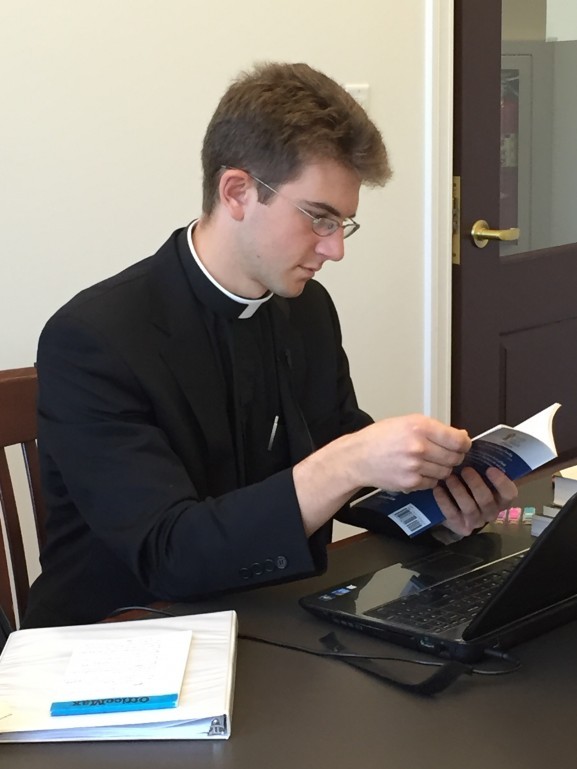 With excitement built up among the faithful Catholic as well as the general public who came to see the pope, it wasn’t as hectic as one might imagine for an influential and prominent figure stopping by a major city.

“When I was down there, I served the Sunday Mass – so literally sitting in the sanctuary on the parkway – and I saw a side of Philadelphia that I never saw before,” said John Howarth, a St. Charles seminarian.

While the pope’s visit brought great joy to the community and the city of Philadelphia, he also taught a lesson in life about being unselfish to the seminarians.

“The pope isn’t a celebrity,” seminarian Eric Banecker said. “And I think it’s important to remember that. He’s constantly calling people of all faiths and no faiths to live in a way that is constant with what it means to be a human being. That is in loving and concerning for the poor. And if he’s able to get people to re-think that and commit to that more fully in the Philly area, I think that’s a great thing.”

Overbrook: Passion for Students Motivates One School For The Blind Teacher

A teacher shares her journey of educating students with visible impairments and other disibilities in the Overbrook School For The Blind. [Read More]

Over the past year, the Archdiocese of Philadelphia has combined parishes in various Philadelphia communities. Earlier this month, the archdiocese announced Saint Donato’s Catholic Church, in Overbrook, would merge with another Catholic church in the [Read More]

Recent results from the 2012 PSSA tests show Grade 11 students at Overbrook High School scored an average of about 17 percent on the reading section compared to the national average of 43 percent. The [Read More]