On the surface, Old City may seem like a neighborhood free of problems. It has a booming commercial district and it sits adjacent to Independence Mall, one of the busiest tourist areas in the city. In actuality, Old City residents and business owners still face hurdles in the process of developing and redeveloping the oldest neighborhood in Philadelphia. 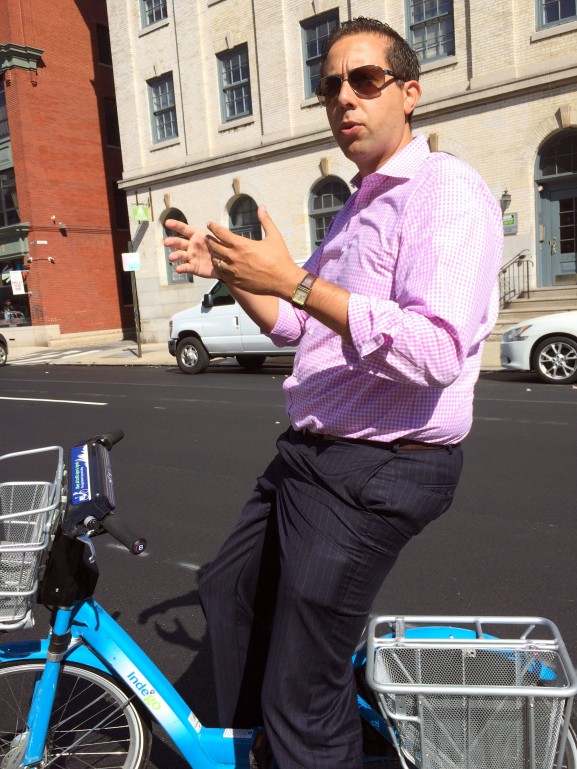 Old City District, lead by executive director Job Itzkowitz, is the local registered community organization in the Old City neighborhood, which provides a multitude of services to businesses and residents alike.

What is the role that your organization plays in the community here.

Old City District is a business improvement district. We supplement city services, we provide for additional clean up crews, extra security services on weekends. This was the prime objective for many years. In addition to being the business improvement district, we are the registered community organization (RCO) for zoning purposes. So, when a developer needs a variance, they are required to go to the RCO, which then submits its opinion of the project to the zoning board before a decision is made.

What does “business improvement” mean in this context?

We sponsor storefront improvement grants, for instance. The city offers, through the storefront improvement program, matching grants for businesses that want to spend a bit of money redoing their façade, paint, new windows. We serve as a liaison to the city agencies, so when businesses have difficulty reaching someone in sanitation or commerce, we can help them move forward with whatever project they’re working on.

Elaborate on what a beautification project entails …What role do you personally play in the organization?

I’m the executive director. I am steering the ship, making sure we’re fulfilling our mission, getting public input, maintaining relationships with neighbors – property owners, businesses and residents. Whether it’s looking forward towards what the neighborhood may be in 10 years, or checking in to make sure our cleaning crew got to all the locations on their route. It’s the day-to-day management of operations and also the long term vision process.

Since arriving at Old City District in August 2014, what challenges have you faced and what progress have you seen and made?

One challenge is that despite the fact that the community is doing very well, there are still instances of blight. 240 Market St. was vacant and blighted for decades. I was able to connect and work with the owner and start a beautification process. We also are looking to spend more on holiday promotion and decoration this year. We’ve expanded our cleaning radius, and we also last year had our first annual Old City Fest. Our next one will be coming up October 11th at 3rd and Arch. 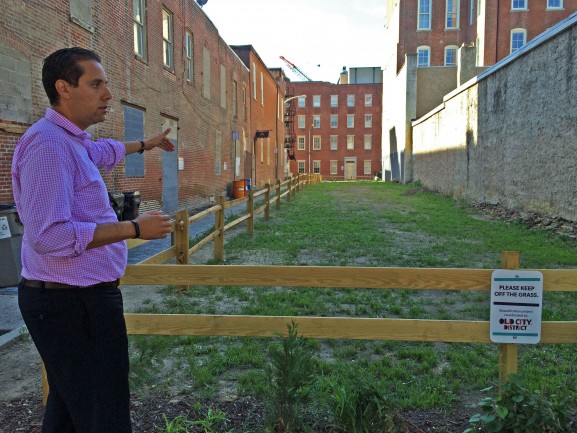 Elaborate on what a beautification project entails …

It was a privately owned lot. It took me six months of engaging with the owner and figuring out an arrangement that would allow us to go onto the lot.

The owner had dug out part of the lot and built up part of the land into a hill, to make it impossible for people to park there. That lead to a lot of problems, a lot of nuisance activity, people using it as a restroom or place to do drugs. The goal here was just to improve this one lot, that would hopefully have an impact of improving the neighborhood overall.

In our negotiations with the owner, he may one day want to sell the lot, so we came to a licensing agreement that was revocable and better for him than a landlord/tenant agreement. It was really about working out the terms of that arrangement and making the cleanup as simple and inexpensive as possible. We had a landscape architect flatten the land, and plant grass and plants along the Market Street side.

It’s really about keeping it clean and the avoidance of nuisance behavior. And maybe in the future we can work with ownership to do something that’s not just taking away a negative but building a positive.

Philadelphia can be considered the birthplace of American politics. Although Philadelphia held a strong influence over the formation of the United States, politics in the city today remain detached from influencing the national political scene. To [continue reading…]