Can you explain the difference between this job and other jobs you have worked?

This job is full-time, year ’round. I’ve worked other jobs and was never interested in anything that I’ve done. I was moving from job to job until I found this one and I fell in love. I have been here for a year and a half with no interest in leaving.

Once I learned the history of the city and Pennsylvania, I was so fascinated and I wanted to know more. I love learning new facts, stories or just tidbits and sharing them with other people. I get to watch the expression of shock or amazement that I felt when I learned them.

Would you say that is your favorite part of the job?

I would say that my favorite thing about it is watching people who have never seen horses interact with them for the first time. Their reactions are priceless. Babies are fun to watch but grown adults are much more expressive. It makes my day. 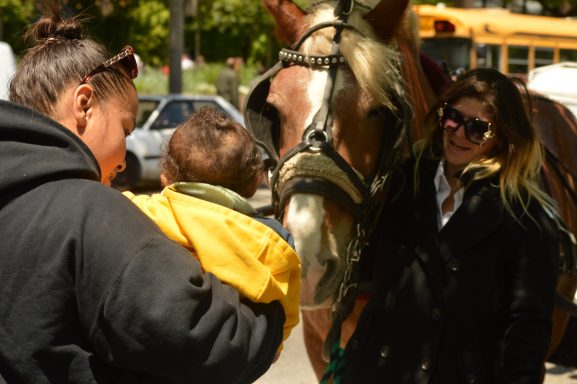 What do people ask you about horses?

Usually they ask me if they bite and then I laugh and say, “Anything with teeth can bite.”

But these horses generally don’t. You should always ask the handler before trying to pet one. Then, most people ask about what are some things that I have learned about horses. I tell the little kids that because horses have eyes on the side of their head that they can see 360 degrees at all times. I tell the adults that Italy successfully cloned a horse in 2003, which I think is crazy.

What are some stories or facts that you found most fascinating about the city while working for this job?

Aside from Philly being the leader in firsts, like first library, first fire department, first national mint and first capital of the United States, I liked that – well, it might not be the most fascinating tidbit of information it is one of my favorites – William Penn nicknamed Philadelphia the “City of Brotherly Love” because he dreamed that Philadelphia would be the city on top of the hill for the rest of America to follow. He hoped it would be everything that England wasn’t for the colonists.

What has this job done for you personally?

Honestly, I feel like I became a teacher. With that role comes the responsibility to pass on your knowledge. I wouldn’t know how to step into the front of a classroom but sitting on the front of the carriage is close enough. People always leave knowing something of value that they hadn’t known before and I love that I am the reason for that.

-Text and images by Allison Clark and Gabrielle Vinogradov.