It was a historic moment at 29th Street and Chalmers Field as Strawberry Mansion High School held its first annual homecoming football game Saturday, Oct. 17. The Strawberry Mansion Knights beat the Immaculate Conception Lions from Montclair, New Jersey 46-32. About 100 people were in attendance.

“It was a good game. We played hard,” Joshua Hunter, junior from Strawberry Mansion High School and defensive end, said. 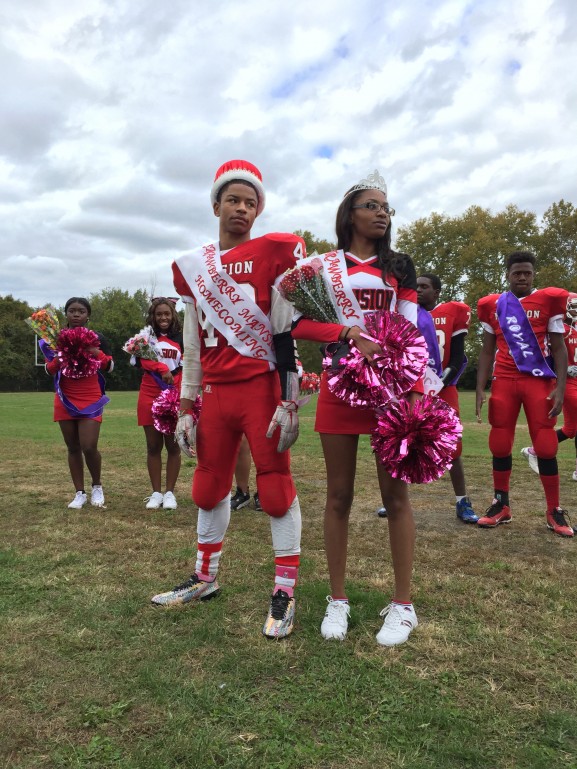 Throughout the school year, Kristen Sylvester, a co-teacher at Strawberry Mansion High School, started talking to students about having traditional high school experiences. One student mentioned that their old high school had homecoming. That’s what sparked the idea.

“Us teachers were like, ‘Man, why don’t we have things like that?’” Sylvester said. “We were like, ‘We’ve got to do this.’ I don’t know how it will happen yet, but it has to happen.’”

Strawberry Mansion High School has experienced financial struggles. In the high school’s 60-year history, this is only the second year the school fielded a varsity football team. They’ve experienced budget cuts and were scheduled to close in 2013, but remained open after teachers and community members protested. Most of the students also live in poverty, as 100 percent of them are CEP economically disadvantaged, according to school district data from 2014 – 2015.

Jacqui Fritz, the high school’s Spanish teacher, is happy that their new homecoming tradition will make things more normal for the students.

“I grew up in a place where football on Friday nights in the fall was the thing to do,” Fritz said. “[The students] see that on TV and they see it in movies and they’re starting to experience it.” 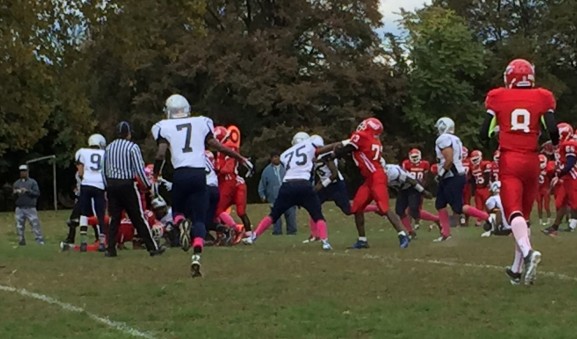 “A lot of the alumni said that even though they’re in the same neighborhood as they grew up in, they don’t talk to a lot of the alumni sometimes,” Carly King, director of community engagement for NET Community CARE – CUA 7, said. “So being able to come together for a game like this and support the kids is an awesome thing.”

Tanya Parker, president of the Strawberry Mansion NAC, thinks that the student body will be uplifted by the support the community gives them.

“We don’t want the children to think that you just go to school,” Parker said. “With them knowing that they have the community’s backing, [the students] no longer have to think nobody cares about [them] or what’s going on in the school.”

Sylvester hopes that the football team and homecoming festivities will bring more positive attention to Strawberry Mansion and all of the good things that already happen there.

“Search for Strawberry Mansion. Everything that comes up is worse school ever, most violent. It’s not truly like that. That’s only one side of the story,” Sylvester said.

Parker believes the football team and homecoming game will show people that other side of the story.

“This is the beginning of a new day, a brand new day,” Parker said. “We’re not hopeless, we’re hopeful down here in Strawberry Mansion.”

– Text and images by Avory Brookins.

Concussion Series: “All Athletes are Taught to be Tough.”

In sports, one play can change everything. For Tracy Yatsko, then a 17-year-old athlete for Tamaqua Area High School located in Schuylkill County, PA, that play occurred during a basketball game. Jumping for a loose [continue reading…]

“I call this particular site here ‘one stop,’” Lenora Jackson-Evans beams from her seat at the Strawberry Mansion Community Development Corporation’s conference table. “We try to do whatever we can for the neighborhood as a [continue reading…]

Chef Joy Parham directed traffic in her kitchen classroom at Strawberry Mansion High School on a Friday afternoon. That day’s lesson was a collaboration with the Spanish II class and Parham had more students streaming [continue reading…]