Situated on the crowded commercial blocks of Olney dwells one of the last bastions of music education in the community.

The Gibson School of Music and Arts seeks to preserve musical tradition in the community through inspiring its youth by teaching them the value of the creative arts.

According to Gibson guitar teacher Caesar Williams (above, left), prior to the school’s establishment by owner and CEO Randy Gibson, the school served as a music store and go-to destination for some of America’s music elites.

“This place was once Zapf’s Music store,” Williams said. “They used to have clinics in here. I remember members of the band Chicago here, members of the band Aerosmith was here, [Carlos] Santana’s percussion section held a clinic here, and the list goes on. There’s a lot of history in this building. It was a good thing Randy did by grabbing it because Lord only knows what would have happened or who would’ve gotten it.”

Gibson has over 30 years of experience spanning his musical training, which he received from institutions such as the University of the Arts, Temple University, the now-closed Combs College of Music, and private schools.

In his studies, Gibson has traveled the world living among diverse cultures and people in hopes of expanding his musical repertoire.

With much hard work he has done so: elevating himself to a point where he’s taken opportunities to perform on stages throughout the world

With a knack for teaching both young children and adults, Gibson feels he has found his niche in the Olney community.

Gibson explained that in the few years before he came to the community, the Olney area was mostly inhabited by German residents.

“As the years passed, the community became more and more diverse,” he said. “You started to see a lot of Asians, Latinos, Caribbeans and the like, and less German folks. I thought to myself, ‘Wow what a great opportunity to instill a love of both music and the lord Jesus Christ into this quickly diversifying place.’”

Gibson’s instructors are just as multicultural as the community that houses the school. Staff members hail from an array of backgrounds including Latino, Caribbean, Haitian, Cambodian and Korean.

Diversity of age is also a prevalent feature. Some college-aged instructors, former Gibson students, teach classes at Gibson School of Music and Arts as a means of giving back to the community that helped them hone their talent. 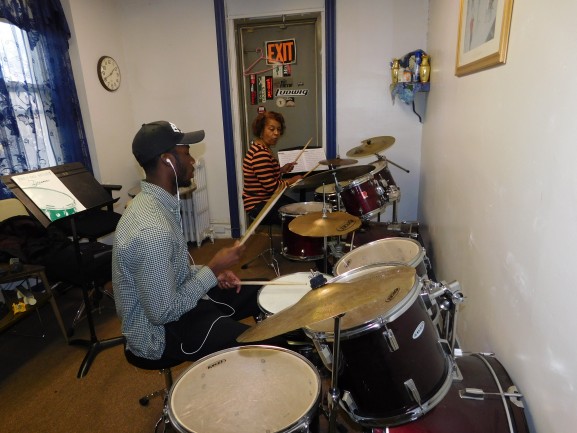 “When I was young, I started off playing drums at Gibson but then I took a long break from drumming,” Henry said. “As I got back into it, I was looking for jobs where I could drum so I came right back to the place where I started. Thankfully Professor Gibson gave me a job.”

Though many of the teachers are no strangers to more secular genres of music or the arts, the school has a religious aspect, which is illustrated by the adjoining church connected to the main building.

Paula Holloway, a piano instructor at Gibson, said much of the staff has ties to Gibson by way of recommendations from a multitude of different church musicians. She also noted that they became established at many of the predominantly black churches scattered throughout Philadelphia. 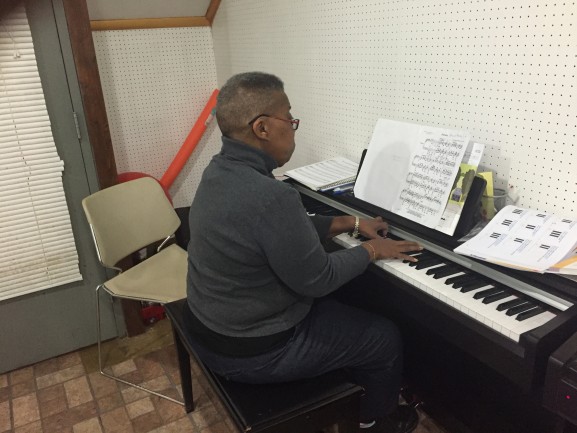 Elizabeth “Netty” Williams (above), another Gibson instructor said she, like Holloway, was recommended for her position at the Gibson school by a church friend.

“I was referred by Kenyatta Arrington, the minister of music over at Enon Tabernacle Baptist Church,” Holloway said. “I sang for their choir and recorded one of their albums. … Gibson said he needed a vocal teacher and so here I am. My experience here at Gibson has been very positive. I’ve seen students grow and progress. Some come for specific reasons such as to prepare for auditions for parts while others come to simply improve their gifts.”

Gibson accepts students of different cultures and faiths present in the neighborhood. His primary focus is music education. He said nurturing a child’s brain by teaching them the arts is just as important as teaching them math or science. 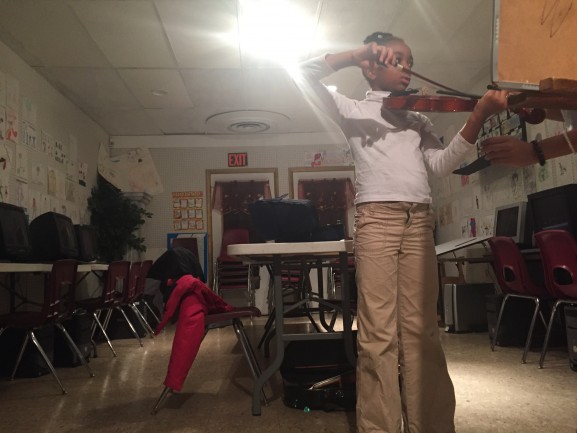 Many of the parents are also quite pleased with how the school affects their children, as quite a few feel that there is a great amount of benefit in allowing their child to take music lessons.

One such parent, Jamila Evans, has a child pursuing violin lessons at Gibson Music and Performing Arts School.

“This has benefited my daughter by giving her primary knowledge and a music foundation, and [by helping her] to learn how to read music, which can extend to lots of different things,” Evans said. “It gives her something to feel good about herself. She had some challenges at school but she comes here every week and knows that people are supportive and caring.”

Through the power of art, even the most complex stories of immigration and assimilation can be expressed. Located on the 1200 block of Vine Street, the Asian Arts Initiative has linked art and communities since [continue reading…]