Though it seems like an ordinary coffee shop, The Monkey & The Elephant in Brewerytown is an entirely unique organization. Its only employees, besides management, are young people who have just recently exited the foster system.

Lisa Miccolis, the founder and executive director of The Monkey & The Elephant, pictured above, had years of experience working in cafes before opening her own.

“I kind of fell into that job but I turned out to really enjoy it,” Miccolis said. “I just felt like I was missing something larger. Giving people coffee on a daily basis is really awesome and it gets them going, but I kind of felt I could do a little bit more than that.” 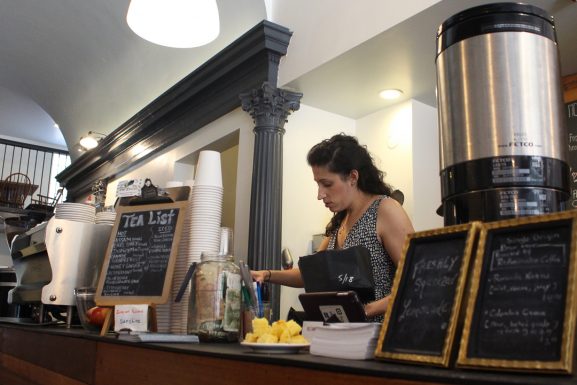 Her longtime love of the coffee shop environment combined with her work for AmeriCorps and an inspirational trip to South Africa led her to the idea for her business.

In South Africa, she met 16 year old Ephraim, who was receiving support services from a homeless outreach organization after leaving his family in Zimbabwe.

“We stayed in touch after I left,” Miccolis said. “I kind of listened to him as he struggled to kind of put all the pieces together while he was with this organization. He was getting help with education and housing and food and all those resources that were there. And then he turned 18 and all that went away.”

From afar, she said, she tried to support him, but she realized there wasn’t much she could offer. The best she could do, short of moving to South Africa, was give him as much guidance and encouragement as possible. That’s when she started wondering how she could help people closer to her who were in similar situations.

She landed on the idea to use the natural community atmosphere she had always loved in coffee shops to help people who, like Ephraim, didn’t have a sound support system.

“As I started to learn more about the challenges that [Ephraim] was facing abroad, I realized the same things were happening here in Philadelphia. With the foster care system, you’re in it, you don’t have any control over whether you’re in it or not, and ultimately you hit a certain age, and everything you had as your foundation is now gone.”

A few years ago, while working full time at a coffee shop, she started putting her business plan in motion. On weekends she sold coffee at Taffets in the Italian Market with a youth she connected with through the Achieving Independence Center, learning more about the holes in the foster system and how best to help.

In February of 2015, she opened the first official location on 2831 West Girard.

She sought Ephraim’s help in creating a name for the shop. They decided to combine both of their favorite animals: Ephraim’s being an elephant and Lisa’s being a monkey.

“It was important to me when I came up with what to call this whole organization that I honor the person who inspired it.” 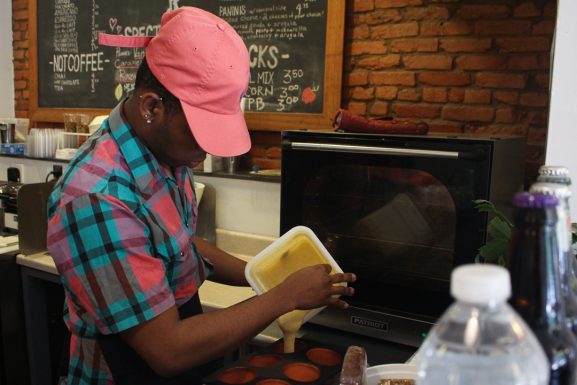 The program is about eight months long, and the youths both work at the cafe and participate in exercises designed to teach them life skills like budgeting, networking and making plans for the future. There are also exercises focused on getting the youths to better understand themselves and the world around them.

Nate Nichols, who is in charge of marketing at The Monkey & The Elephant, said he was drawn toward the business because he was also in foster care. 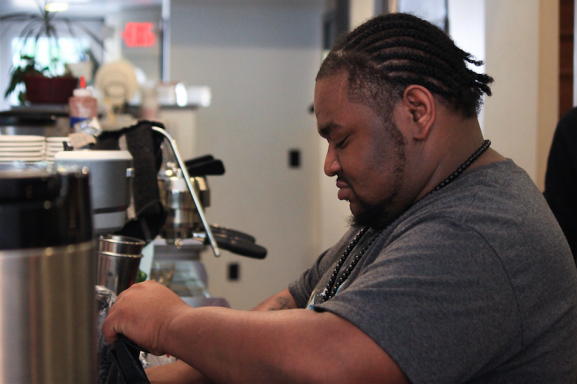 Working at The Monkey & The Elephant can be life changing for former foster youths like Taron Harris, pictured above, who had a tumultuous experience in the foster care system. He entered the system at nine years old, his placement was constantly changed, and by age 18, he signed himself out and looked to Philadelphia Job Corps.

“After I went to Job Corps I came back, was homeless for a while,” Miccolis said. “I lived in a shelter, then I got an apartment through Valley Youth House. After Valley Youth, I got my own apartment, got married, had a daughter.”

When he applied to The Monkey & The Elephant initially, he didn’t get the job right away. He was working at Home Depot when they called him to let him know there was an opening. He’s been here since August, and he said he has definitely benefitted from the program.

“Without here, I wouldn’t be where I am right now.”

His mentors helped him find a house, and he got a bike, he said, smiling.

In January, Taron finished the program and became a supervisor at the cafe. He said he plans on staying for as long as he’s allowed, and eventually he wants to go into social work with foster youth or open up a similar organization, expanding it to include not just foster youth, but homeless youth as well.

A group of entrepreneurs sat in a conference room on a recent Wednesday for diverse reasons: one woman sought guidance on solidifying her cookie business with a brick-and-mortar store; another hoped to develop an online interior [continue reading…]

The Fairmount neighborhood, which is roughly bordered by Girard and Vine Street to the north and south and Broad Street and the Schuylkill River to the east and west, is home to many popular institutions [continue reading…]

Germantown: One Man’s Army of Suits Gives Opportunities to Others

WAY Haberdashery, located at 1605 Rockland St., is home to the WAY Foundation. Marine veteran Stephen Fortt (above) has run the non-profit for nearly a decade and has provided professional attire for thousands of people. [continue reading…]