Thousands of families in Philadelphia recently sat down at their dinner tables to enjoy a Thanksgiving meal complete with a turkey and all the fixings. The meal is the culmination of the time they spent walking around their crowded local grocery store filling their cart with holiday essentials.

For some, this is not their reality. They struggle daily to put food on their table, let alone an elaborate Thanksgiving feast whose costs could amount to a few weeks worth of food.

According to the U.S. Department of Agriculture, 48.1 million Americans live in food-insecure households, meaning they did not have access to enough food for an active, healthy life at all times.

Data from the 2013 American Community survey shows that 22.3 percent of residents in Overbrook Park’s 19151 zip code live below the poverty line.

Councilman Curtis Jones Jr. of the 4th District, Brown’s Family Shop-rite and the Wynnefield-Overbrook Revitalization Corp. joined forces to give out turkeys to the community.

Overbrook Park residents who pre-registered lined up in the lobby of Brown’s Family Shop-rite located at 67th Street and Haverford Avenue to receive their turkeys free of charge.

Morgan Cephas, director of community relations and outreach for Jones’ office, said residents were selected based on need.

“We contacted a series of block captains, from our Block Captain Boot Camp initiative, to see if they knew any families in need, and that is where we got the majority of our recommendations from,” said Cephas. 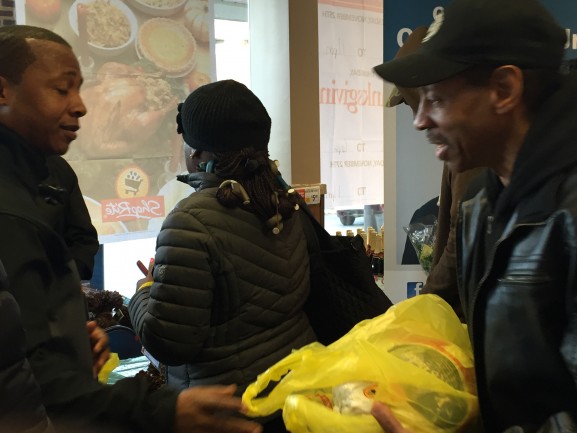 In total, 60 turkeys were given out to very appreciative residents.

“I’m a single mom of five, so I’m thankful for getting a turkey this year so that I can be able to feed my children,” said Keisha Smith.

The Overbrook Park Civic Association has been asking the members of the community that are able to donate non-perishable goods for their less fortunate neighbors for the last few weeks. Marc Reason, president of the Overbrook Park Civic Association, said at first they had trouble getting in contact with those who were in most need of the food baskets.

“We didn’t have any people to deliver them to. So we sent out a last blast on the Nextdoor app and on our Google list. So we sent out a link. And one lady sent us a bunch of names and we went to the houses,” Reason said. “We got 10 names in 15 minutes where we didn’t have 10 names in four or five weeks, and I said it was going to work out. And our fall-back was if no one called and we couldn’t find anybody, we were just going to take it to the shelter.”

The community’s donations allowed the group to put together 10 baskets with 10-pound to 12-pound turkeys and all of the traditional fixings. Reason said the recipients of the baskets were surprised and appreciative.

Poverty continues to be a pervasive issue in America. According to 2014 Census data, the poverty rate was at 14.8 percent with 46.7 million people living in poverty. Children under the age of 18 have the highest poverty rate of any other age group, at 21.1 percent.

Reason was so inspired after reading a statistic about the large number of children who will endure the blustery winter months without coats that he set up a coat drive.

“I read somewhere in the paper and someone texted it to me that this winter there will be about 250,000 children or youth without coats,” said Reason. “So we thought that as a community we should at least try to put a dent in that number of kids without coats in our community in Overbrook Park.”

The coats will primarily go to children in the Overbrook Park community, but no one will be turned away from getting a coat.

“Anybody can get a coat. We are promoting it to residents of Overbrook Park, but if someone comes up and wants a coat, I am not going to stop someone from getting a coat,” Reason said. “Someone might need a coat that might not live in this neighborhood and doesn’t have a coat drive and might not get a coat. I think that defeats the purpose of trying to be nice when you’re being nice to a selective group and not everybody.” 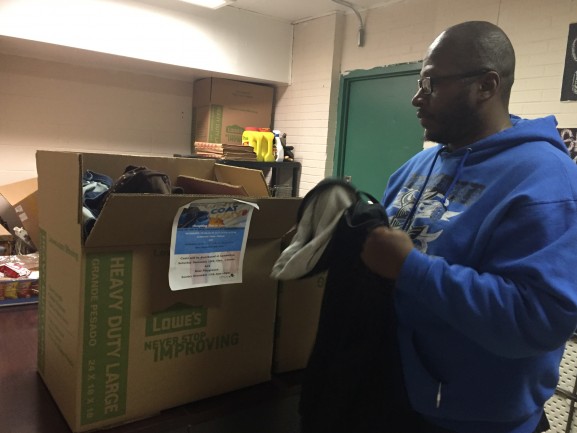 The group has collected between 50 to 100 coats to date. Reason said it is hard to give an exact number since they are collecting at multiple locations.

The coats will be distributed at Lamberton Middle School on Saturday, Dec. 12 from 10 a.m. to noon. The last chance to pick up a coat for a child is Dec. 13 at Rose Playground from 3 to 5 p.m.

Reason said the coat drive is a way to be neighborly and show the community that there are people who care.

“We are really just doing it for our community,” he said. “We aren’t doing it for any fanfare or anything extra – it’s just what I think good neighbors do. And if you do nice stuff and you show people that there are other things going on besides all the negative they see, people are appreciative and they see a new kind of spirit in the community.”

-Text and images by Kirsten Lewis