Over the past few years, the educational funding crisis in Philadelphia has continued to cut jobs and important programs while class sizes have grown, leaving many classrooms with a lack of basic resources and a teacher to student ratio of 16 to 1.

Philadelphia school budgets began being cut in 2011, when the Philadelphia School District borrowed more than $400 million and cut it’s staffing by 17 percent. The crisis still exists, with Philadelphia in the bottom three of late 2013’s national assessment of the 25 largest U.S cities with students going on to gain college degrees.

PhilaSoup, a non-profit organization that began in 2013, works to combat this crisis through bringing the local community together for meals that create funding for Philadelphia schools.

The organization is entirely volunteer run and consists of many past and current teachers as well as others who are passionate about being part of the conversation about education and how to keep it thriving in Philadelphia.

Starting with two sisters from Detroit, Claire and Nikka Landau, the crowdfunding idea has changed location and purpose but has remained successful in it’s mission.

While living in Detroit, The Landaus became inspired by a soup movement in their city. This movement involved bringing people together over a meal to raise funds for local artists. For the sisters, bringing the concept to Philadelphia and applying it to education was the perfect way to empower teachers and make a difference for schools in need.

At each event, all attendees contribute $15 and enjoy a potluck-style menu filled with everything from soup, to wine, to desserts. Each meal hosts three presenters who are educators in the area that have an idea for where they believe the night’s money should go. After each presenter, the community members are encouraged to ask questions and give feedback.

After all of the educators have spoken, everyone has the opportunity to vote for the person they think had the best project and should get the most amount of money from the event’s total.

“When we first started we were holding dinners once a month and since then we have moved it to quarterly dinners to make it easier for educators and the community to come out and to make the pot bigger,” said Carleye Norton, a board member at PhilaSoup. “Because of that, additional fundraisers that we do through our kick-off event, and more grants that we’ve received, we’ve been able to make sure that everyone who presents leaves with something.”

Past winning grantees, like Joshua Kleiman of Kensington CAPA, have used the money for projects like “Alphabet of Hope and Justice”, a art and literacy project that encourages students to have their voice be heard when expressing their fears toward the current state, and the future, of their education.

This year, PhilaSoup has began a new strategy with their soups–now focusing in on specific neighborhoods during each event.

The first soup of the year was held on November 8 at Oxford Mills with the night’s focus on raising funds for Kensington and Fishtown schools.

“Oxford Mills is an amazing space that works to bring educators together,” said Norton. “One of the things that I think start-ups are trying to do, or are accomplishing with other co-working spaces around the city, is what Oxford Mills is trying to do with educators–and we wanted to be a part of that.”

Mary McGinley, 23, and Julia Dent, 22, attended the Fall Soup to get involved in the community after moving to Philadelphia recently.

“We just came out of the education system with just graduating from college,” Dent said. “Although we don’t have kids yet, I think it’s interesting and important to stay informed. We came to get involved in what’s going on in our new city.”

The event’s first presenter, Elizabeth Richards, hoped to raise funds for her classroom to make it a sensory environment for her elementary age autistic students. With hugs and tears, she shared an emotional and passion-driven vision with the room.

“This is my first time presenting,” Richards said. “It’s important because our schools are millions of dollars in debt and teachers are spending their personal money on basic funds. I’m also a great aunt and my nephew has autism so this is something that I’m very passionate about.” 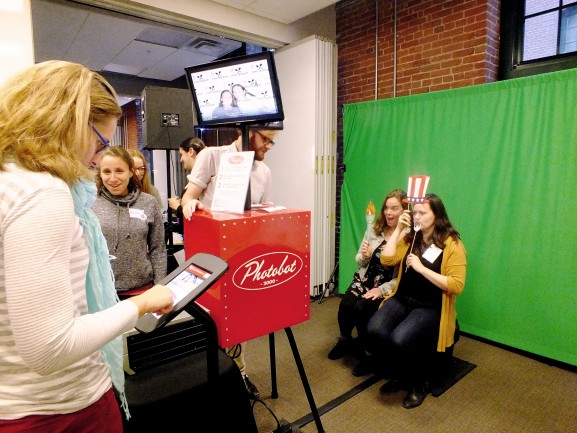 Having fun at the Fall Soup’s photobooth with “Rock The Vote” themed props.

Overall, the soup at Oxford Mills hosted 53 members of the community and raised $645 plus an additional $500 donated from PhilaSoup towards educational programs. Although this is a large sum to be proud of, Norton emphasizes that PhilaSoup is about more then just monetary contributions to schools.

“When the teachers are presenting it feels empowering because they’re talking about something that they love to people who are also passionate about education. It makes this way more special then just ‘we give money to teachers who need it’–we also connect teachers who desperately need connecting,” she said.

Going forward, Norton’s hope is that more space for innovation will be created in Philadelphia to encourage teachers to have a voice and make their visions become reality.

The next community event held by the organization will be the Winter PhilaSoup Dinner on February 21.

– Text and images by Elena Hart.

If you manage to avoid sliding down the soggy slope that separates Wal-Mart from the uninviting, trash-ridden space that is Pier 68 in South Philadelphia, you’ll see a sign of things to come. Nestled between [continue reading…]