Anita Lyndaker-Studer is the executive director of the Oxford Circle Christian Community Development Association. Originally from Columbus, Ohio, she moved to Philadelphia after she graduated from Cedarville University with a degree in social work and then got her master’s degree in social administration from Temple University.

How did you get involved with the OCCCDA?

There was a big transition in terms of who is living in the community, and so the community has become really diverse. As that process was happening 10 to 15 years ago, we started talking about how we could meet the needs of our neighborhood. Because it’s changing, what worked here 20 years ago isn’t working here anymore, and there aren’t services to replace what was here.

We decided to start a nonprofit because we felt like we’d be able to better meet some of the needs. It kind of grew out of a committee in the church, and we met at my house. We met over lunch and went through a strategic planning process, the incorporation process, all of that.

When we had funding, I said I would be willing to get it started. We were incorporated in 2006 with the IRS and the state, and then I started as director in 2008. We did some things prior to that, just with volunteers, but we didn’t really have ongoing programs until I started.

What is a normal work day for you?

Well, I guess the good news is that there’s not really a “normal day.” I think, especially for any small nonprofit, you kind of do a little bit of everything. We’re starting to grow a little bit, so as you grow you kind of get more defined tasks – like we have a program director for example, who takes care of more of the program end now. I tend to do more admin-related things – development, things like that. 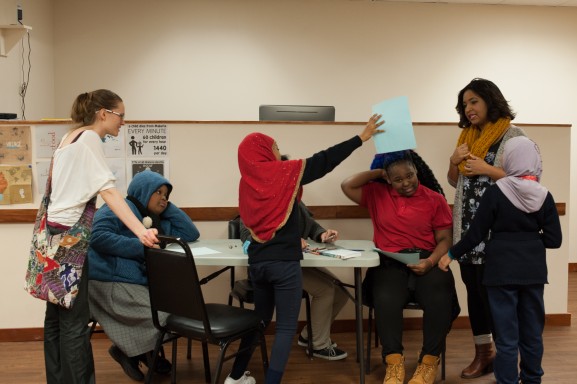 What is the most rewarding part of being a part of the OCCCDA?

One of the things is seeing high schoolers that came here as sophomores at the neighborhood school and are now in college and are doing well. Traditionally, kids from Fels don’t do well in college because it’s not a good school, but they’re doing great. It’s really exciting to me, to see them come back.

Several of them came back and worked with our summer camp this past summer, so yeah, it’s exciting to see them doing well.

Where do you get your funding?

I think that it’s important to have a diverse stream of funding coming in, so we own this property. We purchased it in 2009. About three-quarters of it are occupied by tenants and they basically cover the cost of us being here, so that’s a source of revenue.

We also have funding from individual donors, from foundations, corporations, and we have some state grants as well for after-school programs and stuff. Something that we’re actually in the process of working on, which will eventually be a funding source, is starting a preschool. We’re starting it in partnership with an organization that has existing preschools in this area and is known as a high-quality provider. So that’ll generate some income, but also hopefully provide a much-needed service in this community for early intervention. 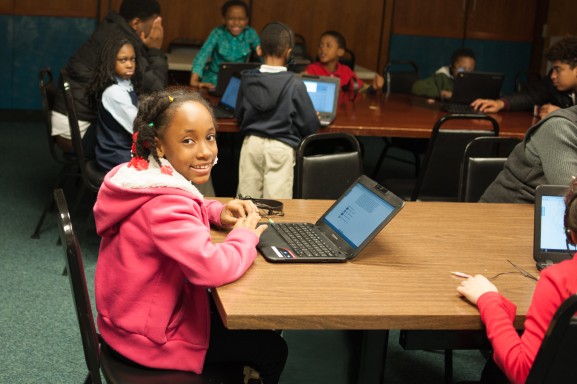 Is early intervention one of the things you think is most needed here?

We have our after-school STEAM program, which is science, technology, education, arts and math, and that’s for kindergarten through eighth grade. Working back to the preschool side, the kids really are not ready, so working with kids earlier, you know they’re better prepared for kindergarten.

That’s part of the reason we felt that preschool is really an important piece. Especially having one that will be high-quality and extended-day because a lot of folks in this area have multiple jobs or work shifts, so a regular-day preschool doesn’t work for them. 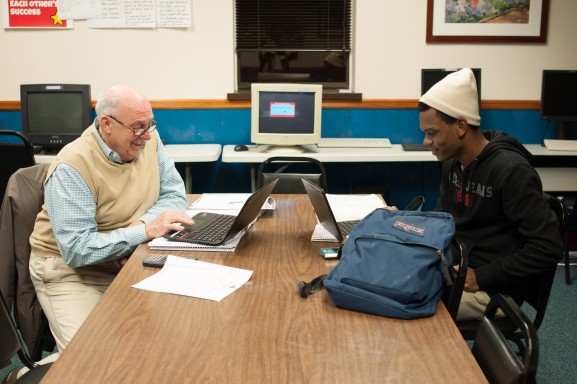 You also run an adult program?

Our adult programs are GED, which is a high school equivalency, and we also do ESL [English as a Second Language classes]. There are two levels of ESL – one for beginners and one that’s a little bit more advanced that is actually run entirely by volunteers. It was started by one of the members of the church who was a high school teacher at Fels, but his background is in adult learning and that’s what he’s passionate about. He actually does this on his own time and he’s recruited other people to help, but he’s the one who actually got it started.

– Text and images by Claire Voeglein and Ashley Kane

Sometimes historic sites hide within their neighborhoods. That’s been the case for Ryerss Museum & Library at 7370 Central Ave. in Burholme Park near the Fox Chase section of the city. Built and donated to Philadelphia by the Ryerss [continue reading…]

[vimeo 64899413] Can an organization based on garnering friendships and providing a means for people to have fun after a hard day at work be philanthropic? For Sarah DeLucas, president of Major League Bocce, the answer [continue reading…]