Anthony Martinez-Briggs, 25, is a teaching artist at the Philadelphia Young Playwrights. He is a co-founder of the grassroots organization “I Love Living,” which stems from the local hip-hop band Ill Doots. He also teaches classes through the Arden Theatre Company, InterAct Theatre Company, and will soon start teaching for the Wilma Theater. These organizations work with Philadelphia public schools in order to teach many different facets of theater.

So what exactly do you teach?

With Philadelphia Young Playwrights, I teach playwriting, but also educational programming that includes acting. So I come in and I help perform student-written monologues, offer my craft to what they have written, and then talk about it. A lot of times when I go into these schools, it ends up that I’ll be teaching ethics in relation to arts.

Can you elaborate on ethics?

The last class I was teaching with the Arden Theatre Company, I was teaching their play “Hans Brinker and the Silver Skates,” a children’s theater show which just closed. I don’t know if you’re familiar, but it’s based off the folk tale in which Hans puts his finger in the dike so the city wouldn’t flood. And you know folk tales in the end have got a lesson, a moral. So we told a folk tale and we worked on reading and we worked on writing, but what I was really working on with them was building a sense of community with their classmates and understanding what responsibilities you hold when you’re part of a community.

On that same lesson plan, I was also working in a special education classroom – it was actually more a behavioral classroom. These kids were pushed here because teachers didn’t know how to deal with their specific learning needs, be that behavioral or capacity to learn traditionally. These kids end up sent to this room. It’s like ages 8 to 14 in there, and I’m like, “What, this ain’t a grade!” I had a kid keep his middle finger raised to me and yell, “FU, FU, FU!” to me because I told him he needed to do something he didn’t want to do. The next day, that kid was the one standing on the chair delivering the message to the rest of the class, which was, if we work together we can achieve great things, to persevere and show that resilience as a community, to get through lows and get through highs, and recognize that we are all in it together.

What issues specific to Philadelphia do you believe need to be taught in terms of community?

One thing I see that they need is really — attention. It sounds so simple, but it’s so real. Philadelphia Young Playwrights really instills putting student voices center stage. Having these marginalized communities’ voices being heard is necessary in the community. People are so used to not having a voice that they just want to yell on top of each other, and not just in a literal sense, but in a big-picture type of way, and I see that in the classroom. There needs to be more listening and openness and communication.

How do you take these kids and – using theater, using art – make them care?

I think it has to do with ownership, listening, offering consistency and, last but certainly not least, leading by example. The school system is inconsistent, the communities are inconsistent, sometimes the households are inconsistent, so me coming in and saying, “I’m going to be here next week,” and then being there next week, like really being there, does wonders for these kids. I’ve seen it. And they don’t believe you. They’re like, “Yeah, whatever.” They might even test you. They might even be bad enough that you don’t want to come back. It (messes) with the wiring in their brains, because they are used to negativity begets negativity, and then I’ve proven their point and somehow they’re right – I’m not to be trusted and I’ll abandon them and I’m not on their side.

That’s not what they really want, but that’s what they’re pushing for. Then you come back and you prove you won’t abandon them, no matter what. And that doesn’t mean pander. But, I show them respect and then I give them ownership of their next response to me. How you respond to me is up to you. I’m not about to kick you out of this class because that’s too easy. You’re not learning anything by being kicked out. People are always like, “Kids got to own up and do this, that, and the third so they can learn.” And it’s like, I understand that, but to be a true facilitator you have to meet the people where they are. 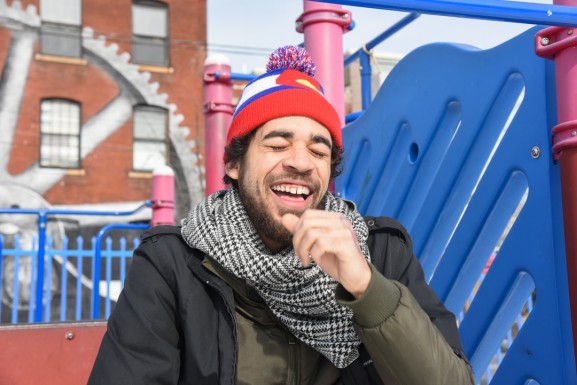 – Text and images by Matthew Leister and Matt McGraw

Drawing inspiration from the iconic “A Great Day in Harlem” photo by Art Kane in 1958 that signified unity among jazz musicians, to XXL magazine’s 1998 commemoration photo called “The Greatest Day in Hip Hop History” [continue reading…]

[vimeo 80776295] It’s no secret that the School District of Philadelphia has fallen on hard times. The district has to work with the budget it has set and because of this budget there have been many [continue reading…]