Ian Kiesel is just a few weeks into his term as president of the community garden at Ralph Brooks Park on 20th and Tasker streets, but he brings years of experience to the role.

Kiesel grew up in Ardmore, where his mom was a big gardener. That influence was present when he chose to attend Bennington College in Vermont, where he worked on an on-campus organic farm.

When Kiesel moved to Point Breeze almost 10 years ago, guerrilla gardening became a means for him to make use of vacant lots on each side of his former home on Cleveland Street, a move, he said, his neighbors came to appreciate.

Now, living close to what was another vacant lot not too long ago, Kiesel hopes to use his knowledge in an official role to ensure that the community garden will thrive for years to come.

What do you think starting an official garden like this does for the neighborhood?

I think it fosters some sort of hope and just possibility to see something that you never thought we would be seeing outside of a farmland. I know a lot of people here, and I know they’re torn about it in a lot of respects too. They want to see the neighborhood get better, but then they’re also afraid of their property taxes going up and whatever else. So when something like (the community garden), where it’s actually built into the trust, there is a land trust process we’ve been going through, it’s not going to be developed ever. It will keep going through. There will be new boards elected all the time, but as a community thing, it will be here longer than any house property. I think that is a nice solid thing too, where this is part of Point Breeze. It’s part of Point Breeze, it’s part of the community, and anyone – as long as you can pay your $10 membership – anyone is welcome. 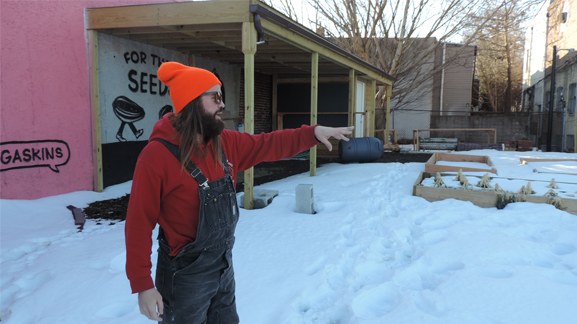 So what range of people have you gotten so far, coming over and wanting to help out and join? Has it been diverse?

Sure, because of the relative location, where it’s very close to the 20th Street, Tasker Baptist Church right there, we’ve had some good membership draw from there. There you’re tending to get your age-ranging people, mid-late 30s up to mid-late 70s, 80s. Not too sure at the moment the cap of the age, but we’re making a point that in some of the beds that we’re building, we are going to make what are called senior beds. They will actually be raised higher, so that people won’t have to bend over as much. We’re just trying to keep that sort of focus on everyone that can be here. But yeah, we’ve got families, we’ve got singles, all sorts of people. So it’s been an inclusive group.

What do you guys do then with the plants? Are they for sale?

Yeah, it’s a new process, and I think this year we’re going to expand the whole thing. But pretty much the beds were self-maintained. Everyone that was here, pretty much like a lottery, you just got to have a bed. There are memberships to being part of the community garden itself, and then there is also a bed membership. So you can garden in the sense of you will be participating in the volunteer things we do, whether it will be educational outreach or coming to help build a rain-barrel system that we’re going to be putting in or whatever. And at that point in time, it’s kind of just like you appreciate what it’s doing and you want to support it sort of thing. Now, if you pay an additional $15 or $10 for the bed, then that bed is yours and you can do whatever you want with it in terms of you can grow your own food for yourself, for your family, to sell. It’s however you want to go about it. I tended to grow stuff for personal use, and there is some stuff where we would do canning later on, but also giving out plants and stuff to my neighbors this past year, just because we have so much in excess. And then trading with the other people in the garden, as well, for maybe something that I don’t have. So (it’s) just kind of real agronomy-based system right there. 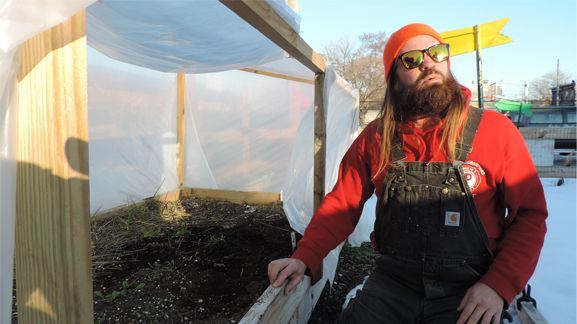 So was the community garden brought up alongside (Ralph Brooks Park’s) development, or were they separate things?

Yes, they were a project together, worked on together. The garden would not be in existence had it not been for the introduction of (Ralph Brooks Park) and the amending and the cleaning up and the building of the top lot and the new basketball court.

Yeah, Connor Barwin and his group, the Make The World Better Foundation. They are the benefactors, but there’s some conjunction. There was a benefit concert that was put on with Kurt Vile at the Union Transfer. The money from that was 100 percent donated toward that. There were other different local groups, so it was a combination, but yeah, (Barwin and his group) were driving our catalyst in getting that done. They got this whole thing situated. The Pennsylvania Horticultural Society came in and helped out, figured out the licensing of that sort of stuff, like how to get the land trust. There were a lot of things in motion before I even knew what was going on, and it was literally, I was walking down the street, and I saw some signs that said “There’s a new community garden, get active!” and I was like “Cool, all right! I was actually looking for a garden spot this year.”

So you came in through volunteering? What was the process of getting involved?

Yeah, it was a volunteering process. Essentially, there was a phone call, “there is going to be a meeting.” It was a local building right next to the church. They just had whoever wanted to show up. We could start having a couple meetings and discussions, and finally there was (Claire Laver) who is running Connor Barwin’s group at the time. She essentially was the one who got everything going within the community and was there at the initial beginning of the garden itself, and then helping us to get the board, figure out how to get the bylaws, all that sort of stuff. She was instrumental in getting that to occur as well. So then we had a short board, we started basically in June or July of 2015. I was a VP at that time, but that was just because I was a little busy with some other things. (Kenny Davis), another great local man, he was our president. (Eliza Michiels) and (Mary Chicorelli) were our treasurer and secretary, and now, basically Kenny and I flipped. He asked me to be president, so he is now vice president. I’m doing the presidential role. 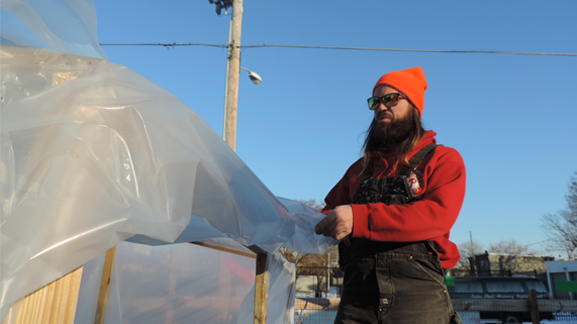 Yeah, the way it’s written into our bylaws is you can be elected to the same position three times. So if I were to be president for one, two or three years, basically my main goal is to install a system that will work for everyone involved. One where I can take the knowledge that I have, give it to people, and if I’m not here in three, four, five, 10 years, it will still be taken care of. There’s no reason why I couldn’t see some 16-year old or 17-year old kid being a president of this thing as an early experience for them to really learn about leadership and how to run something, and take pride in it. It’s not like it’s a super hard job, not like you’re president of the United States or something. That is one thing that I really like about being in this neighborhood, is that I feel like I have had a good effect on people, neighbors, other kids. I’ve seen that occur, I’ve built those relationships, and that’s a powerful motivator to do something. And if someone wants to take it and run with it, that is even better.

– Text and Images by Jordan Waylen and Nick Tricome

Since last September, the Somerset Neighbors for Better Living has tackled the topic of what to do with vacant lots during its monthly meetings. This civic association in Kensington is now ready to roll of [continue reading…]

https://vimeo.com/24361183] “I’m strong,” Kevon Lewis, a 7-year-old boy said as he lifted a hanging basket of petunias that is almost as large as he is. Kevon and his siblings were eager to help their grandmother [continue reading…]