The Police Athletic League of Philadelphia was created in 1947 by a police sergeant who wanted to create a baseball team made up of neighborhood kids who wanted to play. Since then, PAL has worked to build strong relationships in the communities around the city.

PAL has also worked to keep the image of the Philadelphia Police Department positive. There are 18 PAL centers in the city.

“You’ve got the police department and the community and they go hand in hand,” said Officer Joe Ellerby, director at the Ford PAL Center. “Without the community, there’s no PAL.”

“There have been times that I walk past PAL one day and there was something messed up or broken with something outside, then I’d walk past the next day and it would already be fixed,” he said. “The people really care about keeping the center the best that it can be for the kids.”

On the east side of the building where the center was located, there was a mural painted several years ago. The mural was intended to show kids the stages of life they go through in order to be an upstanding and respectable member of the community. 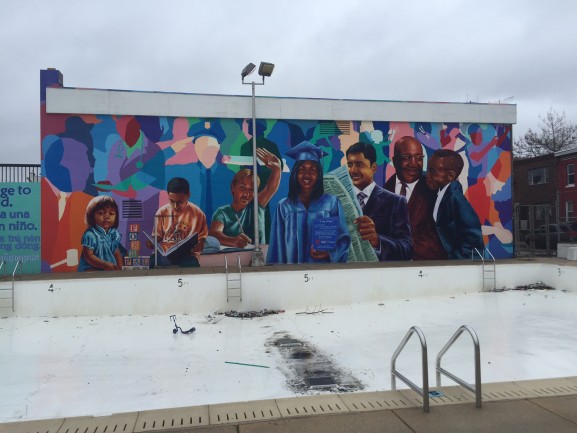 Ellerby has been a dedicated employee since he started there in 1990. He has cared so much that he has gone as far as eating dinner with kids’ families at their houses and attending graduations and weddings of kids who have grown up in PAL.

Ellerby said that he comes into the center every day to be there for the kids. He also runs a fair share of the activities and programs that PAL has to offer. One of those programs is “Boys to Men Mentoring.”

“It’s showing them good etiquette as far as good hygiene, respect your parents, respect yourself, help out in the community, help out at the soup kitchen,” said Ellerby. “That’s what ‘Boys to Men’ is all about. It’s uplifting them, it’s raising them from being boys to being men.”

Ellerby has also coached some of the sports teams at Ford PAL, such as basketball and baseball.

“I’m real competitive, so I want my guys to be competitive.” said Ellerby (below). “That’s how I want them to be in life. I always tell my guys, ‘How you practice is how your life is going to be.’ You can’t look to shortcuts – shortcuts lead to a dead end.” 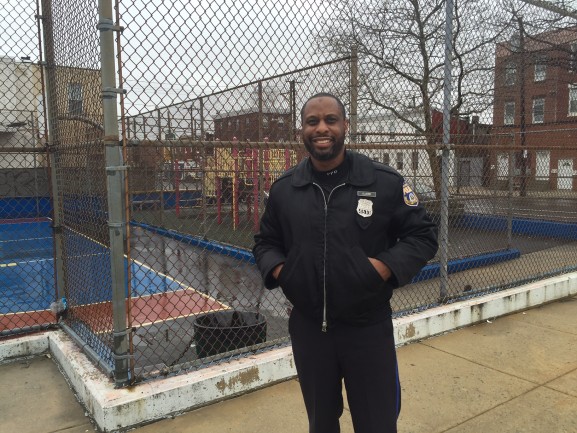 The practice and dedication has won many championships. In 2004, for the first time, both teams for each age group won the championship baseball games in their divisions.

Ford PAL was adopted by the Phillies a few years ago. Each year, the Phillies have thrown a Christmas party for the kids and the team has also invited them to attend games.

Kids are able to play other sports, such as flag football and soccer. They are offered other things like access to computers, a chess club, homework club, and field trips to Sixers games, the Philadelphia museums, live shows and more.

Ellerby said that a lot of kids who he has seen grown up going to PAL have gotten married and have children who now come to PAL. He also said that about 90 percent of kids that grew up in PAL come back and help out whenever they can. 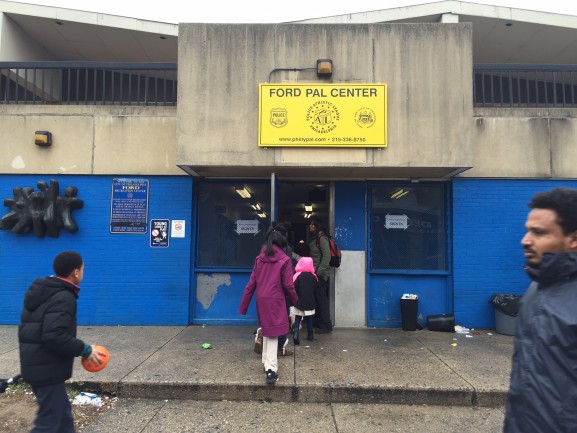 One of the kids who grew up going to PAL, Shakirah “Kirah” Jones, has worked at a daycare for several years. The kids from the daycare have attended PAL three days a week thanks to Jones.

Jones said that PAL had a very lasting and impactful influence on her life.

“I was pretty much a wild kid coming up, and the PAL calmed me down.” said Jones. “You come to the PAL Center, it’s positive, it takes you away from that type of stuff (fights).”

– Text, photos, and video by Abigail Durey and Amber Clay

Rocio Cabello and Renny Molenaar are the proud owners of iMPeRFeCT Gallery on Greene Street in Germantown. Neatly tucked away behind the shops and restaurants of Chelten Avenue, this gallery brings art to a neighborhood [Read More]

Follow city and state election coverage at this recognized site and partner of philadelphianeighborhoods.com Visit https://www.pa2012.com/

Poems about New York and chapters from a romance novel echoed through the Kingsessing Library’s sunlit basement. On Sept. 28, the library hosted an open mic poetry night for older adults— the first of many, [Read More]