Councilwoman Maria Quiñones-Sánchez (above, in red) was the first Latina elected to a district seat in City Council and has continued to advocate for Philadelphia’s diverse communities since.

Working directly with Mayor Jim Kenney, she proposed a municipal ID law on Feb. 25 that would provide all city residents with access to government-issued photo IDs that do not indicate immigration status.

“Municipal IDs will unlock doors so that all Philadelphians can fully participate in our city’s vibrant economic and civic life,” Quiñones-Sánchez said in a City Council statement released Feb. 29.

The IDs could enable residents to access necessary services, from being able to open a bank account or registering a child for school to renting a library book or accessing services from city agencies. Legislators hope the IDs could also provide a way to file police reports, according to the City Council fact sheet, which activists at the Pennsylvania Immigration and Citizenship Coalition in Philadelphia said undocumented immigrants often avoid for fear of outing their immigration status.

The ID cards could be obtained through proof of identity and Philadelphia residency.

The proposed bill was introduced after Kenney renewed Philadelphia’s status as a sanctuary city by reinstating Executive Order No. 8-09, which states local law enforcement will not collaborate with Immigration and Customs Enforcement to deport undocumented residents. ICE must offer a warrant in order to have access to undocumented Philadelphians in custody of local law. The statute had existed previously, but was eliminated under the Nutter Administration.

“There is no question that something must be done to help bring Philadelphians out of the shadows,” Kenney said in the City Council statement.

“At a time when local and national rhetoric directed toward immigrants has raised serious concerns about our understanding of civil rights, it’s essential for elected officials to proactively support and protect immigrant communities from abusive policies that do more harm than good,” Gym said of the ID bill.“It doesn’t just make sense from a human rights standpoint; it’s also smart economic policy.”

And Quiñones-Sánchez isn’t the only council member pushing for immigration reform. Since Kenney’s first action in office this year made Philadelphia a sanctuary city once again, local legislators have introduced at least three measures that have reflected local attention to immigrant rights, and activists said the city’s existing legislation is welcoming overall toward immigrants.

Quiñones-Sánchez and Gym teamed up to introduce a resolution on Jan. 28, urging President Barack Obama to establish “a comprehensive national policy regarding our undocumented immigrants that seeks to preserve and protect families” according to the City Council docket for Resolution No. 160085. The resolution was adopted by the City Council the same week it was introduced, after being sponsored by 16 council members.

A second resolution introduced by Gym and seven other council members called for the City Council Committee on Public Health and Human Services to hear testimony from immigrant communities – including African, Caribbean, Latino and Asian immigrants – about social services issues impacting them. It, too, was adopted.

The City Council’s efforts this year to address concerns of Philadelphia’s immigrant communities is reflective of its value of diversity, executive director of Pennsylvania Immigration and Citizenship Coalition Sundrop Carter said. PICC is made up of various activists – professionals, advocates and immigrant groups – who fight for immigration reform statewide.

Carter said that when immigrant communities feel their needs are being considered, they are more likely to produce successful, independent members of society who contribute economically and socially.

“I think Philadelphia has shown itself to be a city that is interested in welcoming immigrant and refugee communities,” Carter said.

Commitment to inclusion, which Gym said is a key aspect of the municipal ID bill, is a trait of Philadelphia, Carter said. She said she believes Philadelphia legislators have realized that the city’s population is increasing due to immigration and that immigrant communities have high rates of small business ownership, an economic driver. Gym confirmed that assessment.

“Philadelphia has reversed decades of population decline in part through attracting immigrants to our city,” Gym said.“They’re revitalizing economic corridors and diversifying the culture and life of our communities.”

City policy on immigration, Carter said, is fairly limited by state and federal legislation. Given that, she believes the existing policy in Philadelphia that gives protections and services to immigrants is impressive.

For example, Executive Order No. 3-13, created under the Nutter administration, specifies that city services must be made accessible to immigrants in Philadelphia through the development of Language Access Plans. Then last May, Philadelphians voted to amend the Philadelphia charter so that it, too, states language access must be available in city services. Previously, only the departments required by federal law to have language access offered it.

Director of the Office of Immigrant Affairs Miriam Enriquez said her staff is helping departments draft and eventually implement those language access plans. Though she doesn’t have hard deadlines, she expects developments in language access as early as this fall.

“One of Mayor Kenney’s goals is to improve the effectiveness and efficiency of government,” Enriquez said. “When you’re talking about immigrants, without language access, you can’t really do that.” 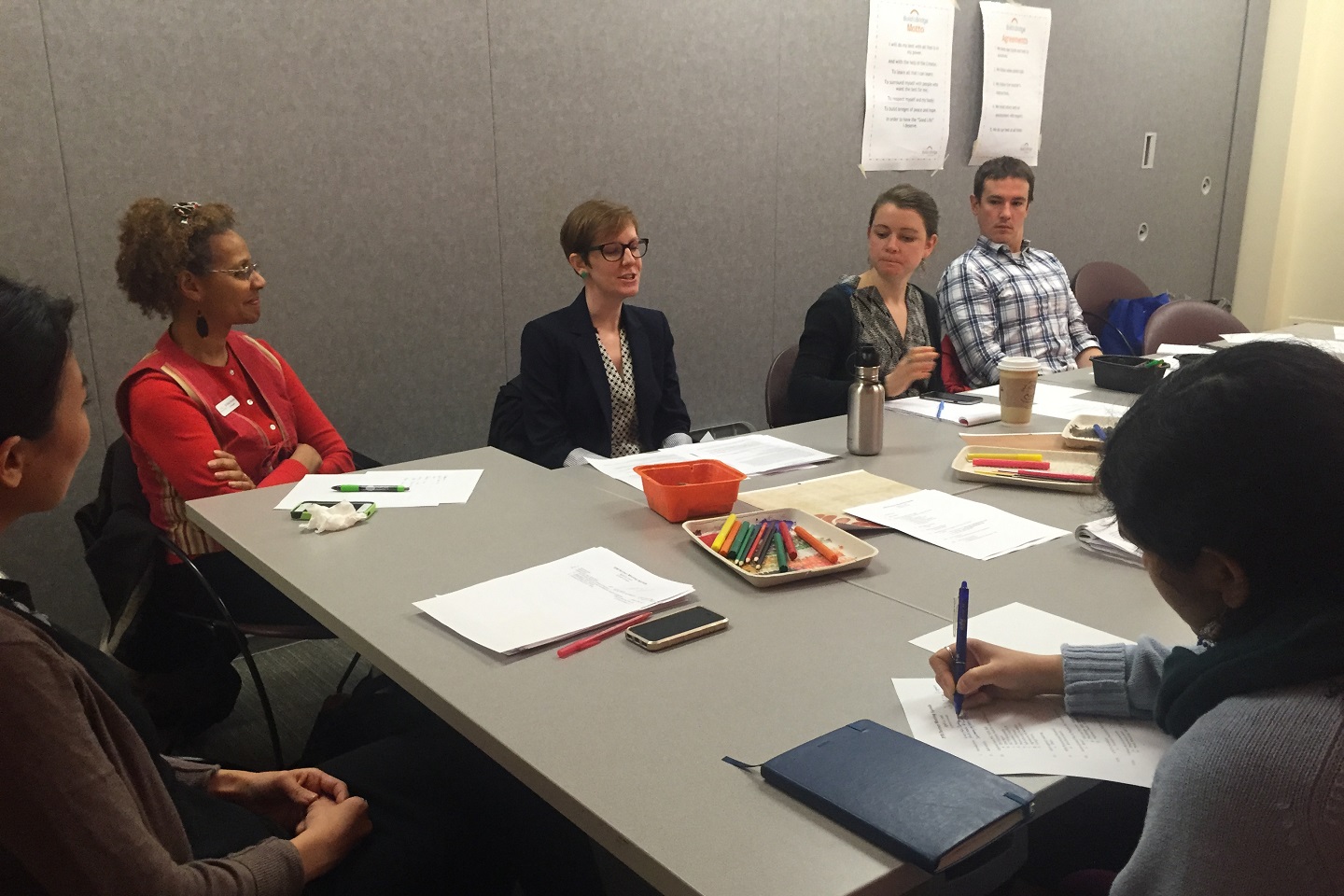 While they anticipate improved access through legislative actions, the immigrant community in Philadelphia can also turn to local activist organizations that provide social support, like BuildaBridge, which operates a refugee support project (demo session pictured above). BuildaBridge leads art therapy sessions that cater to diverse language needs and gives refugees a sense of community.

Looking forward, Carter said she’s pleased with the legislation to help immigrants that’s come out of City Hall. The next step, she said, is making sure all of those beneficial policies fully in action – like the Language Access Plans that Enriquez’s office will roll out sometime in the next year.

“There’s always room for improvement, of expanding those things,” Carter said. “But I think the most immediate would be to see those policies implemented.”

— Text and visuals by Erin Edinger-Turoff and Joe Brandt.

https://vimeo.com/21847630] With the City Council primary elections right around the corner, candidates for Philadelphia’s 6th District seat waited their turn to speak to residents of Mayfair at the civic association meeting in the John Perzel […]

People of Irish descent in Philadelphia have a history dating back to the pre-American Revolution era. According to the Global Philadelphia Association (GPA), Irish Americans make up the largest ethnic group in the Philadelphia area. […]