The Pretzel Park Farmers Market, now in its fourth year of operation, provides fresh and organic fruits and vegetables to the people of Manayunk, a community known to be lacking in accessible healthy food retailers.

The market takes place every Saturday (10 a.m. to 2 p.m.) from mid-May through November. It’s run by Friends of Pretzel Park, a project of Manayunk Neighborhood Council (MNC), and features produce from Crawford Organics, a farm located in East Earl, Lancaster County.

“This year we have this great organic farmer,” said Kevin Smith, president of MNC. “So where do you go to get a big pile of organic vegetables? You’d have to go to Whole Foods or something like that, but now we have it right here in the neighborhood.”

According to the study Walkable Access to Healthy Food in Philadelphia from 2012-2014, which was released by the Philadelphia Department of Public Health in November 2015, the Lower Northwest section of the city saw a decrease in both grocery stores (five to four) and farmers’ markets (four to three) during the two-year period. As it pertains to the study, the Lower Northwest includes the neighborhoods of Manayunk, Roxborough, Andorra, Wissahickon and East Falls.

The report also found that in 2014, 34,782 (68%) of the total population of 50,799 people in the Lower Northwest had low to no access to walkable healthy food retailers. This number is 23% higher than the citywide average for the same year.

Manayunk, specifically, scored in the ranges of low to no walkable access to healthy food retailers in 2014. The nearest grocery stores to the neighborhood surrounding Pretzel Park are both located on Ridge Avenue in Roxborough – an ACME (about a mile drive from the park) and ShopRite (about a two mile drive).

Justin Snyder, who has worked for Crawford Organics for about 13 years, sells the farm’s products at the Pretzel Park Farmers Market.

“Today I have close to 40 different items,” Snyder said. 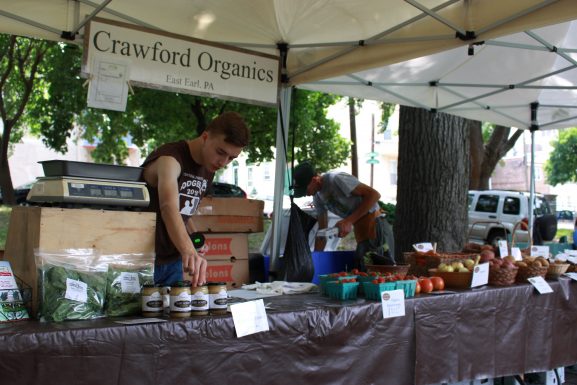 Snyder’s selection is not limited to produce like strawberries, leafy greens and potatoes. He also sells items like eggs, dairy items like yogurt and cheese, honey and popcorn.

Snyder praised Pretzel Park as a great place to do business.

“It’s a nice, beautiful park,” Snyder said. “The shade from the trees helps make it a nice, cool environment.”

Along with Crawford Organics, weekly vendors at the market include Tim Bellew, who sells organic baked goods like pies and cookies, as well as hot foods like organic turkey sloppy joes.

Another weekly vendor is Shaun Turner of 2Fourteen Cheesecakes, which specializes in unique cheesecakes in jars. He praised Pretzel Park for the venue’s family-oriented nature.

Smith explained that, in addition to the weekly vendors, the market hosts a number of part-time vendors. Some merchants that have made appearances this year include Liberty Plants, which sells seedlings ideal for starting a garden, and Fifth Of A Farm, which specializes in handmade jams and jellies, as well as a number of craft vendors.

The market frequently holds events like live musical performances and activities for kids. Market organizers also offer free coffee, donated by Volo Coffeeshouse on Main Street, to anyone who makes a purchase.

Eliot Duhan of Friends of Pretzel Park said one goal of the farmers market is to harness a sense of community in Manayunk.

“It’s a place and opportunity to see the people in the neighborhood,” Duhan said. “It’s that sense of interrelatedness and connectivity.”

Duhan said he loves to see the farmers’ market used as a platform for neighbors to get to know each other and as a means to bolster community-based initiatives. On this particular day, which Duhan dubbed “Dog Park Day,” Friends of Pretzel Park focused on raising awareness for making improvements to the park’s well-used dog-run.

In honor of Dog Park Day, the market hosted the Red Paw Emergency Relief Team, a Philadelphia nonprofit that assists pets and their owners who have been displaced by disasters. 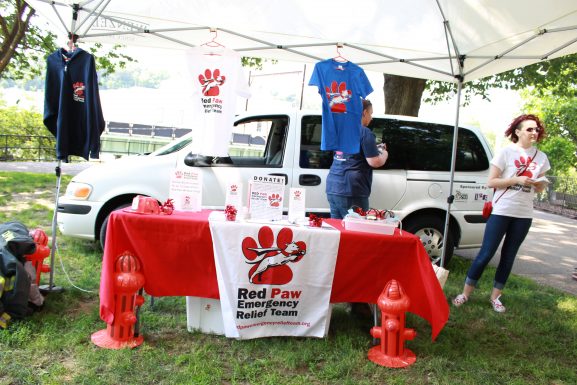 Despite flyers for the Pretzel Park Farmers’ Market being posted throughout streets of Manayunk and store windows on Main Street, Duhan said the biggest challenge for the market has been getting the word out.

“We would like to let every single person know we’re here every Saturday,” Duhan said. “Every week we get people like, ‘I didn’t know this was here. This is great! I’ll come every week.’ And they often do.”

Market manager Arlene Jones said turnout for the market has been good this year, but parking continues to be a challenge. She said Friends of Pretzel Park hopes to coordinate with the adjacent St. John the Baptist Roman Catholic Church to allow attendees to use the church’s parking lot when the parish is not holding an event of its own.

Smith said he hopes that events like the farmers market will help to make Pretzel Park become a hub for the neighborhood to come together. 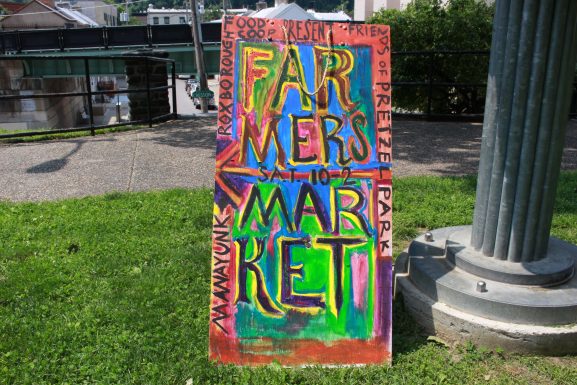 Port Richmond: Five Pubs to Go to for a Good Time

For many Philadelphians, a night out may not include going into Center City. Some would rather stay close to home and go to their usual haunt than hop on the El or grab an Uber [continue reading…]