In 2011, the Brewerytown CDC and the Fairmount CDC collaborated to turn an abandoned lot into a space the two neighborhoods could put to use, creating the foundation for the community run Girard-Dream Garden. 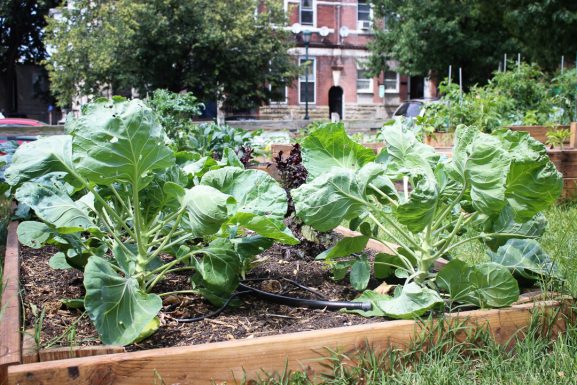 With the help of a grant from the Preservation Alliance for Greater Philadelphia, the Fairmount CDC was able to select and revitalize certain spots in the neighborhood that were “in need of a facelift,” said Kevin Moran, executive director of the Fairmount CDC.

“The idea was to find bruises in the neighborhood and heal those bruises,” he elaborated, “and if you heal bruises before they become worse, it’s kind of an intervention strategy.”

The area at 31st Street and Girard Avenue, one of the first projects the CDC aimed to tackle with the grant money, was a prime bruise. While bleak and litter-strewn, the square was overlooked by a mural of abolitionists and civil rights leaders and situated in a recently revived commercial corridor. 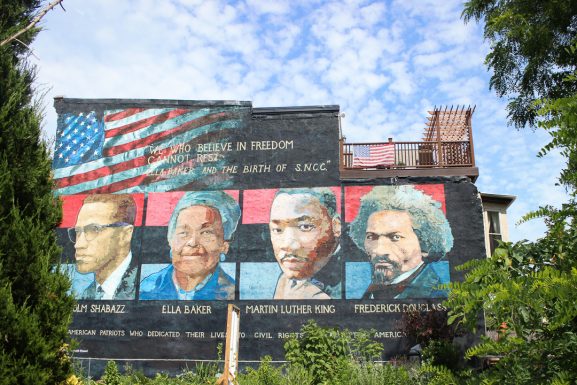 The decision to clean up an area on Girard Avenue was also significant because it has historically functioned as an east to west dividing line between Brewerytown and Fairmount – two very different neighborhoods in terms of demographics.

“We used it to begin positioning Girard Avenue as less of a dividing line and more of a meeting space for the two neighborhoods,” said Moran.

Since 1900, Fairmount has contained primarily white Europeans, and young people and middle and upper class people have been gentrifying the neighborhood for over half a century. Attractions like the Philadelphia Museum of Art and Eastern State Penitentiary have also turned the neighborhood into a hub for tourists to Philadelphia. Brewerytown, on the other hand, has been a predominantly black neighborhood since the mid 19th century. It’s often characterized by unemployment and crime. It too, however, has seen gentrification, but only as recently as 1999, when developers began renovating vacant homes.

Moran said the Fairmount CDC has had a hand in some more of the recent developments on Girard (it’s office is, in fact, located at 2712 W. Girard Ave.), while operating with the Brewerytown CDC to ensure those changes are reflective of both neighborhoods, not just Fairmount. The Brewerytown CDC could not be reached for comment.

“It was a natural fit to collaborate,” Moran said of the work between the two organizations.

While the organizations put in the money and manpower to initially clean up the lot and turn it into a green space, they left the fate of its future to the community.

They did maintain some upkeep on the area, Moran said, but the community quickly began to take control. Residents like Jamie Murphey, pictured below, have taken it upon themselves to keep the garden running. 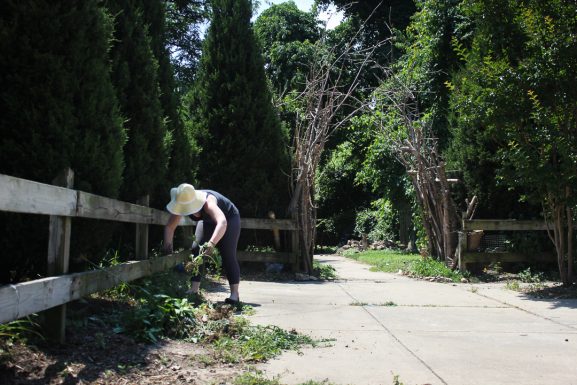 Dallas Perin, a Brewerytown resident who spends most days during planting seasons at the garden, said the way he and others run the garden is “inherently horizontal.”

He added, “We want to make everybody here feel as though they have as much of a voice as everyone else.”

So far, he said, the garden has been successful in drawing in the neighbors. He and fellow gardeners will invite anyone who walks by and seems interested to check out the plots, and some people, he said, have begun projects independently.

Though there are already some gardens and green spaces in and around the Brewerytown area, ranging in size from backyard plots to Fairmount Park, the Dream Garden’s strategic location serves another function.

Kevin Moran said he and the CDC hoped this new community space at 31st and Girard would help draw people to the businesses springing up, and, of course, be representative of both neighborhoods.

Marcus Hines, a Brewerytown resident and frequenter at the garden, confirmed that the garden does attract a range of people who might not normally have the opportunity to socialize.

And, while another garden only a couple blocks away from Fairmount Park might seem redundant, there is no shortage in benefits green spaces have on urban communities.

Aside from the obvious health benefits of gardening – increased exercise, time outdoors, and a diet high in fruits and vegetables – there’s ample evidence that gardens help build strong communities. 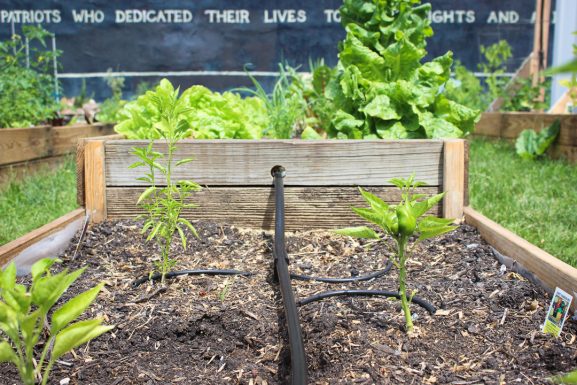 A report on the Health Benefits of Urban Agriculture by Rutgers, the State University of New Jersey and several other organizations outlined a number of fields in which gardens have a positive impact, including physical and mental health of gardeners and relationships within a community.

The report also stated community gardens in urban environments can help the local economy and benefit social, health, and environmental issues in neighborhoods.

Whether in part because of new ventures like the Dream Garden by the Brewerytown and Fairmount CDCs, the two neighborhoods are changing. Walking down Girard Avenue today, it’s clear it’s becoming a hot spot for both historic Brewerytown residents as well as young adults from Fairmount or the ones edging into Brewerytown and buying up the recently renovated properties.

While it can be difficult to pinpoint the exact number of homeless individuals living within a city, the city of Philadelphia’s count as of January 2016 determined 705 people living within the city were entirely unsheltered. Local nonprofit organization Project [Read More]

Mural-covered and filled with sounds of chatter and faint music, Old City’s co-working space Indy Hall sees a rotating cast of about 70 of its 300 members daily. The two-story building, adorned with Christmas lights [Read More]

As the prison population in the United States has more than quintupled since the 1970s, re-entry to society has become nearly impossible for returning citizens. According to the American Civil Liberties Union, the US holds [Read More]