Emaleigh Doley is a Germantown native who has seen the neighborhood continually transform throughout the years.

Her contributions to the community began on a grassroots level during the foreclosure crisis in 2009, as she observed quality of life issues arising within the area. Now, she uses her passion for her neighborhood in her work as the corridor manager of Germantown United Commercial Development Corporation, a position funded in-part by the Philadelphia Commerce Department. In this role, Doley aims to improve both commercial and residential aspects of Germantown, while acting as a liaison between the community and the Commerce Department.

Having seen Germantown transition over the years firsthand, what common core of values do you think would make Germantown a better place, especially if not everyone is actively engaged?

I think coming from having been essentially a grassroots community organizer, citizens here have actually really in many cases done more than their fair share, and that’s something we’ve seen throughout Germantown.

I’m not of the opinion necessarily that everyone needs to get on board. At the very basics, I would love it if people take pride in their community, keep their blocks clean, take care of their children, help their neighbors, all that kind of stuff. But people shouldn’t have to make the Earth move to get something basic done.

So, I think Germantown is really lucky that we have already such an engaged body of residents and neighborhood leaders. I think there could be more partnerships, more collaboration between the professional organizations, the civics, the block associations and the registered community organizations.They’re already doing so much that the only way for them to improve is to be more strategic and work together in a more unified way. 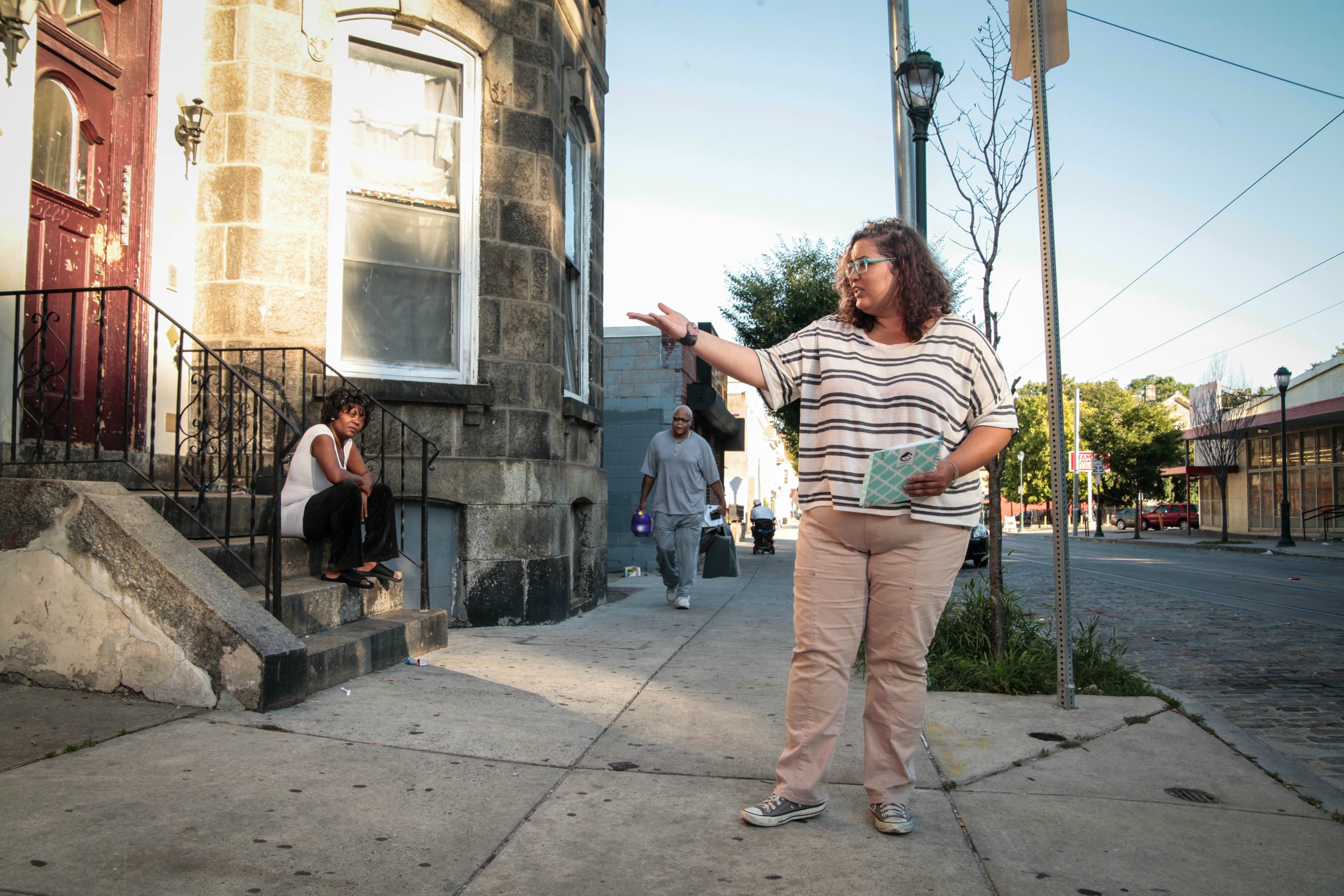 What are some of the biggest issues in Germantown?

It’s really different depending on what section of Germantown you’re in.

But in other areas, it could be vacant properties that are a bigger concern. In some areas, speeding cars are a concern. It may seem insignificant but it’s significant to the people living there.

So, overall, Germantown’s poverty average is one or two points higher than the city’s average. Obviously, poverty and jobs are big issues that are pretty widespread.

What is a challenge that residents face daily?

Dealing with trash and litter is a big thing and that’s also a big issue for businesses on the business corridor, especially in Lower Germantown. There are no public trash cans and dozens of businesses. To me, that’s a basic city service. But there’s no money to buy trash cans.

We’ve been advocating on behalf of Lower Germantown businesses and residents for public trash cans. It’s a highly trafficked SEPTA bus route also. At this point, it’s ridiculous that there aren’t at least eight. I have also read studies that say towns and cities that have cleaner streets are predominantly less violent, which I think is something to also consider. This has been going on for several years now and now that I work for Germantown United, it could be part of my job to advocate for the trash cans.

We might be making some headway but I don’t want to jinx it. 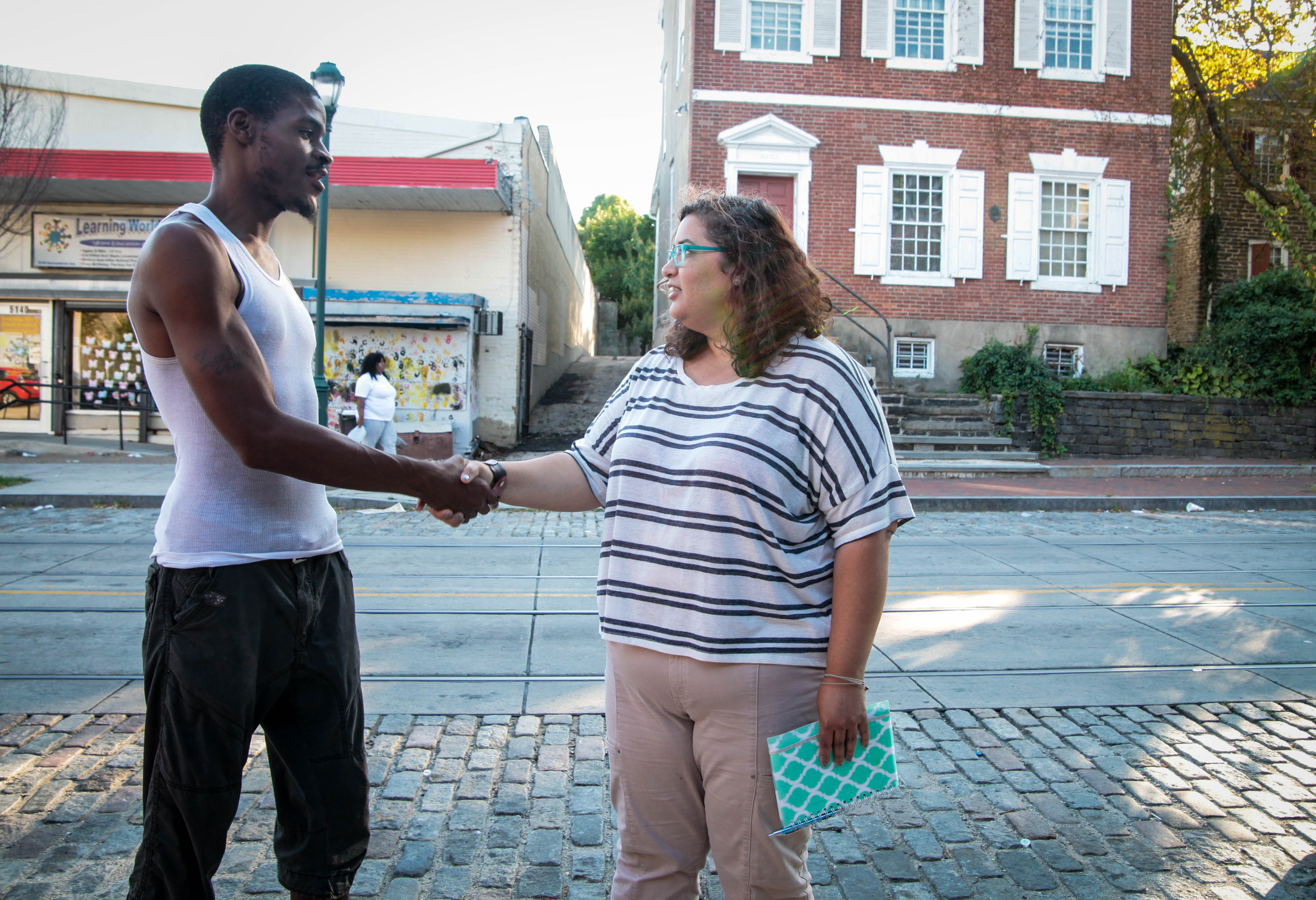 How do Germantown residents and businesses use social media to connect?

I think social media is definitely a tool but any organization that is utilizing social media to get the word out about anything that is impacting the neighborhood also needs to make sure they’re communicating in other ways.

That’s the old school ways: paper flyers, phone calls, knocking on doors, getting articles in newspapers and other publications about whatever it is that they’re working on.

I’m a millennial. I grew up with the Internet. I use it as a tool and it’s definitely allowed Germantown United to expand. But we don’t completely rely on social media to get the word out because, of course, there are a lot of people who aren’t on social media.

-Text and images by Brittany Salerno and Logan Beck.

Sitting in the community room in St. Francis of Assisi Church, located at 4821 Greene St., were nearly 50 people from Germantown. The individuals differed widely in age, but remained seemingly equal in the amount [continue reading…]

The Mayfair Community Development Corporation and the Allegheny Iron and Metal Corporation have joined together to revitalize Mayfair. The specifics of the deal will be explained to the public on April 21 at the debut of [continue reading…]