New American families are staking claim in South Philadelphia from the ground up.

The Growing Together Garden on 25th and Reed Streets has been offering refugees and community members the opportunity to grow fresh produce and cultivate community since its opening in 2015. In a new partnership between the Nationalities Service Center (NSC) and the Pennsylvania Horticultural Society’s City Harvest Program, the garden has become the site of an inclusive entrepreneurial venture. 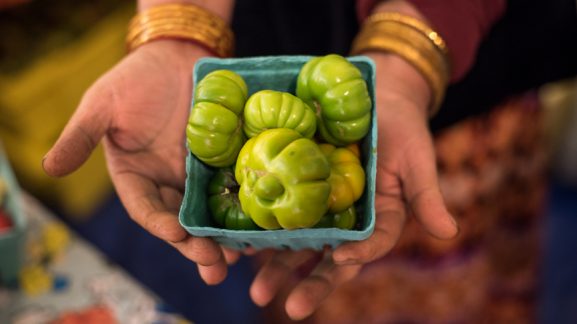 “I am learning to grow the things I would eat in my homeland,” said Methrus Mbonigaba, a Congolese refugee who came to the United States six months ago. “This is my job now, learning every day.”

Mbonigaba is one of four beginning farmers that grow and harvest produce for the Growing Together Farm Stand which began in June and operates from the NSC lobby at 12th and Arch Streets every Wednesday. The farm stand is open to the public and offers a 50 percent discount to NSC members on all items.

Colorful items like vine-ripened tomatoes, kale and squash draw customers in; and specialty items like bitter melon and African eggplant offer a sense of home to new American families. As a welcoming gift, any leftover goods from the market are donated to refugees arriving in Philadelphia that week.

“It’s comforting for the new American families to know these tomatoes were grown just a few blocks away by someone like them, with a similar immigrant experience,” said Juliane Ramic, Senior Director for Refugee and Community Integration with the NSC.

The 2.8 acre garden is home to 500 growing plots. Half of the growing space is utilized for the farmer-training program that harvests for the Growing Together farm stand which is staffed by three refugees and one North Philadelphia entrepreneur. The other half is operated as a community garden which welcomes refugees that have been resettled in South Philadelphia as well as their neighbors.

“The local food movement in the United States has taken hold but not necessarily in some of the refugee communities so we are looking to promote that along with a sense of ownership in their communities,” Ramic said.

For NSC, the main focus of the garden is community integration. The PHS City Harvest joined the project to invest in food security for the neighborhood that has struggled with fresh food access since the closest grocery store closed in July. 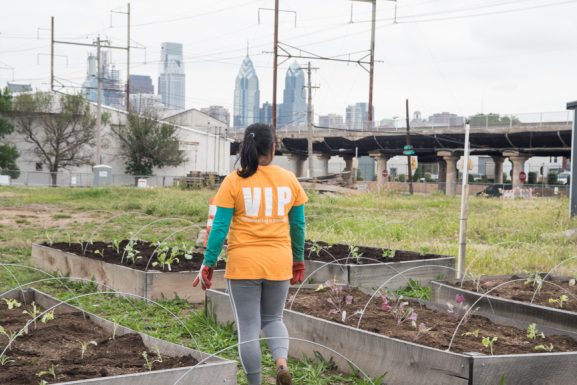 Lisa Mosca, assistant director of City Harvest, said the garden has become a vital food resource for the neighborhood.

“We use the strategy ‘grow for yourself’ because we can create affordable markets and donate goods whether we’re serving seniors, children, or folks that can’t grow for themselves,” Mosca said. “The closer the food is, the more pure it is, which will help to increase quality of life and health in the community.”

In addition to the farm stand, PHS organizes neighborhood cleanups and seasonal celebrations in the garden to celebrate not only food, but community integration with positive results.

“We see the refugees share with their neighbors what they were growing and stop each other on the sidewalk to talk,” Ramic said. “Growing Together has had a tremendous impact on helping communities to put down roots.”

President Donald Trump’s dedication to enacting a travel ban was finally approved by the Supreme Court on June 26 after the administration’s third revision of the policy finally passed in a 5-4 vote. It may […]

Germantown: High School Students Build a Garden From the Ground Up

While most high school students wouldn’t even think to go near school during their months off over the summer, a few students at Germantown High School could not seem to get away. It wasn’t summer […]

Michele Hangley is a lawyer and a litigation shareholder at the law firm Hangley Aronchick. She is also a board member at the Nationalities Service Center, a local organization which provides various services to immigrants and refugees […]