The Millennial generation makes up about 31 percent of the voting population for this upcoming election. For this current election cycle both the Republican candidate, Donald Trump, and the Democratic candidate, Hillary Clinton, have voiced their platforms to Millennials as a method to mobilize their vote with the generation. A portion of this demographic has yet to vote in a presidential election during their lifetime.

Both Trump and Clinton’s campaigns have made numerous appearances in the state of Pennsylvania due to its recognition as a swing state. In order to best market to the Millennial and college aged population in Pennsylvania, the Clinton Campaign has hired campus organizers to maximize their presence on college campuses.

Catherine Vegis, a campus organizer for the Clinton campaign, recognizes her role as an organizer impacts both Pennsylvania’s vote and the Millennial vote, both of which have been deemed important demographics in this election cycle.

Vegis and other campus organizers work out of an office on Cecil B. Moore Avenue, conveniently located walking distance from Temple University and SEPTA’s Broad Street Line in order to best access other city campuses.

The office is filled with homemade signs for Clinton ranging from her typical campaign slogans and lots of witty variations of them. All of them show their Millennial flare throughout the entire office. The room is filled with cubicles although it seems as if many are empty with organizers either out on site or working collaboratively across the office. 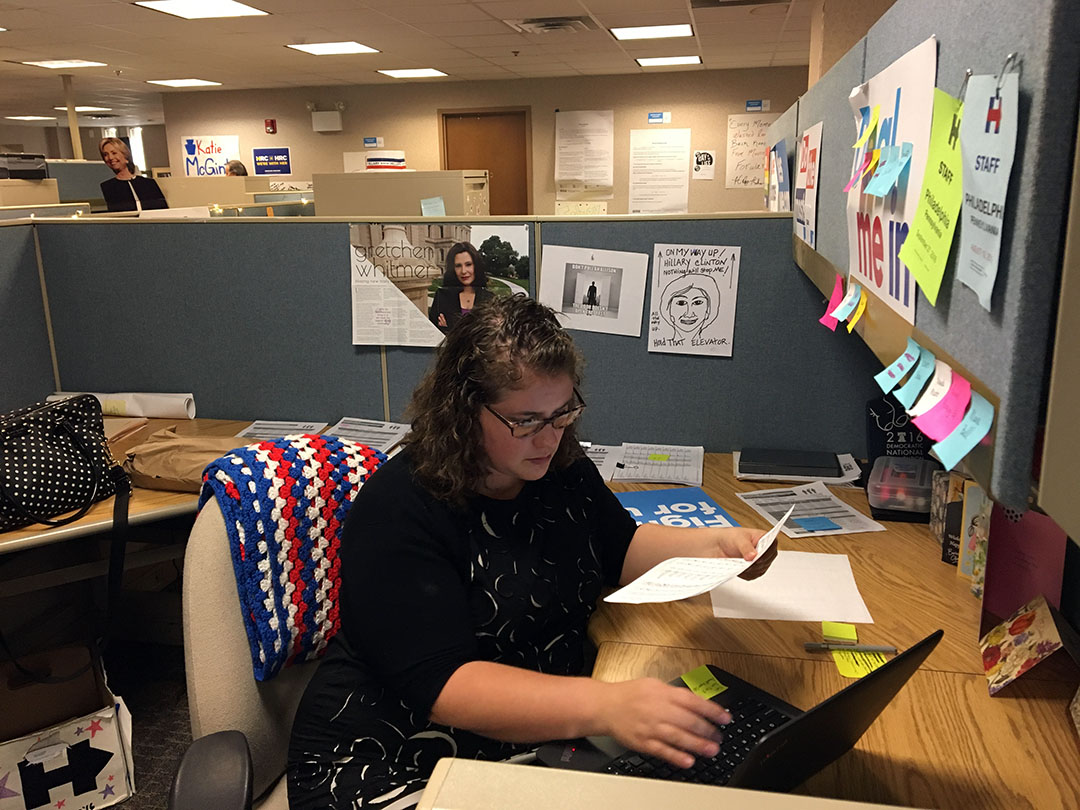 This collaborative environment stretches from their roles in the office to their work on campuses across the country, aiming to get the Clinton message out to potential Millennial voters.

“The stakes are really high in this election,” said Vegis. “There is a lot that our generation, specifically the Millennials have at stake. Whether it be college debt, looking at our future and how our international policy plays out.”

Vegis is part of the same Millennial generation she is working with for the campaign. She is currently taking a semester off from DePaul University, where she is a senior. Vegis has worked on other political campaigns, including the Rahm Emanuel campaign to become mayor of Chicago.

Isabel Rothberg, another campus organizer and a senior at Columbia University, is also a member of this heavily weighted Millennial generation. After spending a summer as an intern at The White House, Rothberg decided to take the semester off to work as an organizer and advocate for the Democratic party.

“Being part of something bigger than yourself, contributing and giving back to the country is really fulfilling and really awarding,” Rothberg said. “It also just made me really aware of just how important Obama’s legacy has been on this country.”

Many campaigns this election cycle have listened to this large youth movement and have worked to get their voices heard there. Following the Democratic National Convention in July, Clinton held a rally at Temple University and throughout the rest of the season her campaign has had spokespeople make appearances at universities across the country.

Trump has also had his campaign appear at numerous universities.

As organizers, Vegis and Rothberg are part of the campaign’s grassroot efforts to engage with local communities. These campus organizers develop and execute volunteer trainings, partner with campus political affiliated student organizations and create innovative methods to capture the student voter audience, among other tasks in their day-to-day work.

“We’re going door to door, phone banking and canvassing to engage in meaningful discussions about why I personally believe Clinton is the best candidate,” Vegis said about the mission of Get Out The Vote.

Campus organizers, fellows and volunteers go door knocking around their respective campuses surrounding area to provide voters with knowledge about their polling location, hours, and all other concerns including keeping morale up during the wait for polls. The Philadelphia campus organizers work at the University of Pennsylvania, Temple, Drexel, LaSalle, Bryn Mawr, Swarthmore, Haverford, Villanova and more campuses around the Philadelphia region.

“Voting is one of our rights, so we want to remind them that it is something they should be excited about,” said campus fellow Kimberly Gabler.

Campus fellows work with the campus organizers to execute their strategies for recruiting volunteers, working with campus liaisons and campaign events of all kinds. Part of the mission for campus organizers is to register college students to vote and update their addresses for out of state students.

“The state as a whole has potential for going red,” said Vegis, “but Philadelphia has a really strong Democratic crew that we want to help bring to the forefront.” 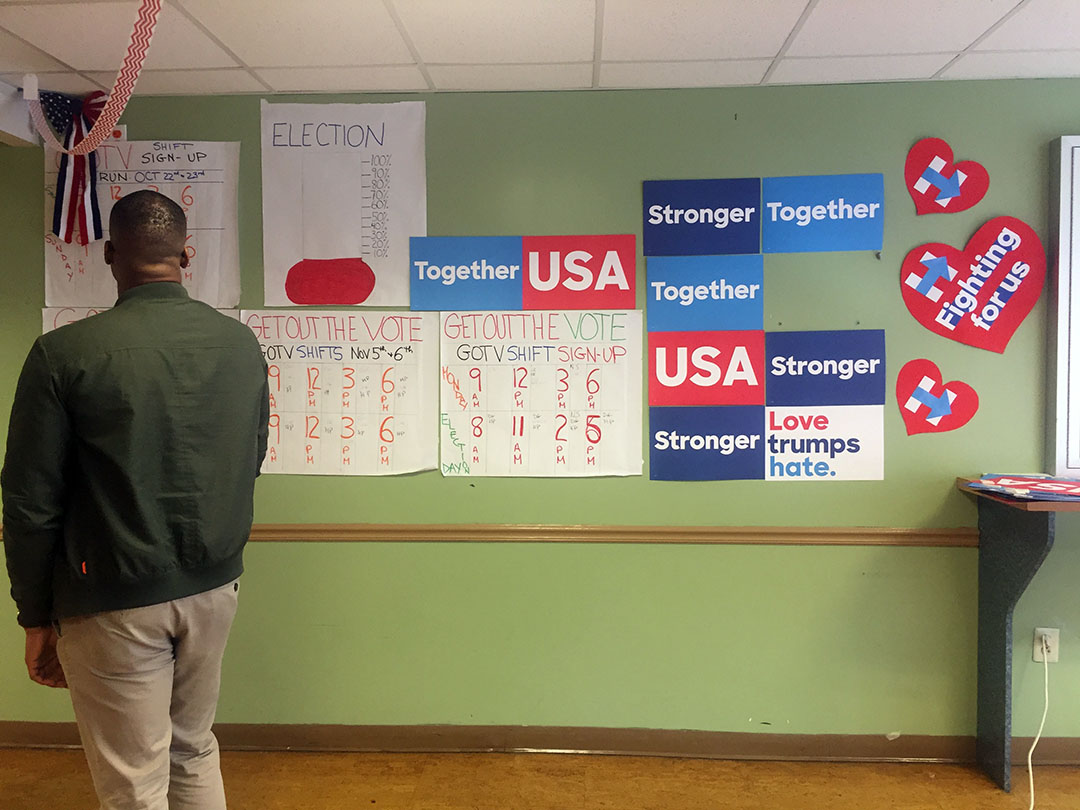 In the past three elections, Pennsylvania’s division between Republican and Democratic voters has been by less than 11 percent each time and as close as 2 percent, during the 2004 election. Philadelphia’s overall population accounts for 12 percent of Pennsylvania’s population.

In addition to working on advocating for Clinton’s platform, campus organizers and fellows recognize their audience and also educate students on state politicians such as Katie McGinty and Josh Shapiro.

“We know the presidency is really important but sometimes people can get lost in the down ballot and it is also really important to make sure Pennsylvania is moving in the right direction,” Vegis says.

Both campus organizers feel passionate about the work their candidate has done in the past and hope will continue to do for the future of the country. Rothberg refers to the generation both her and Vegis are a part of as a large youth movement and they both recognize how vital the millennial vote is in this election.

“This generation has a really strong voice and they’re ready to echo it,” said Vegis.

-Text, video and images by Aish Menon and Elly Perlowitz.

As education budget cuts have spread throughout the state of Pennsylvania, building closures present a way for school districts to quickly lower their costs. In Philadelphia, a large wave of closings occurred in 2013. During [Read More]

Kensington: What Do You Want From The Next Mayor?

With the Philadelphia mayoral election coming up, each section of the city has its own concerns and expectations about which candidate will take on the title. Philadelphia’s diversity shines through in many cases; however, elections [Read More]