Election Day has come and gone and many are either celebrating or discouraged by the result. While this brought an end to the current election cycle, the work done to increase the political involvement of the Chinese community is far from over.

The organization does not have an official office at this time, and its members discuss issues and potential solutions through social media apps such as WeChat, said Peng. If an issue resonates strongly enough with the group, as affirmative action has, they will meet in person.

“Chinese usually have the stereotype in the mainstream that they are quiet and submissive and don’t like to rebel,” said Peng (below). “But that will change from this year.” 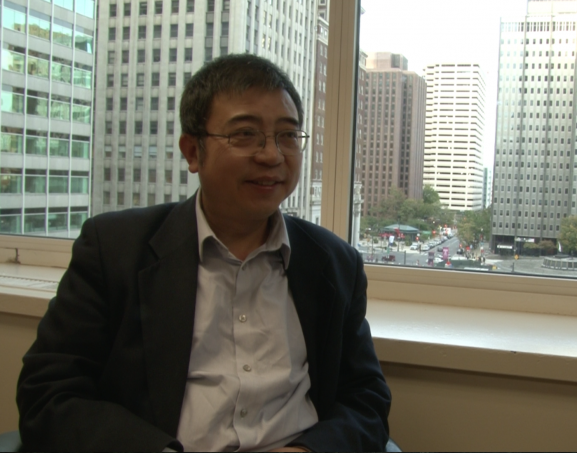 A local organization looking to bolster political awareness and participation is the Philadelphia Chinatown Development Corp. (PCDC), which worked tirelessly to raise the number of Chinatown residents who could say they voted on Nov. 8.

In charge of this effort was Lamei Zhang, the special projects associate, who coordinates events and outreach operations to get citizens educated and, hopefully, invested in voting.

“If we can communicate the significance of voting, the power of it, and have them participate, we will have succeeded,” said Zhang.

To Zhang, there are a number of obstacles to voting for Chinatown residents.

“From my experience, a lot of people don’t want to get involved with government or anything they’re not familiar with,” said Zhang. “This happens with immigrant populations where they are in situations and are not entirely understanding of it. So they are very hesitant to be part of something they are not familiar with, or are afraid of the government getting involved with something with their personal life.”

Similarly, Zhang said that residents are concerned that organizations will frequently send letters or emails with advertisements that they wouldn’t want to deal with.

One issue that PCDC attempts to solve is the language barrier that can be experienced by some residents. When available, bilingual volunteers will be present at polling stations to assist voters, Zhang said.

Zhang said that in this and any election, there are specific issues constituents of Chinatown are concerned about.

“Healthcare, welfare and housing,” said Zhang. “A lot of people come to PCDC for welfare counseling, for information on Medicare and Medicaid.”

In the weeks leading up to an election, PCDC volunteers canvas local housing developments to remind citizens of the election and to vote.

One such volunteer was Van Le, a Bryn Mawr College student who canvassed for the first time this year.

“I wanted to know if people in Chinatown know when and where to vote,” said Le.

With the election results in, the final tally in the 5th ward, 24th division, which encompasses Chinatown, was 713 votes for Democrat Hillary Clinton, 114 votes for Donald Trump, and 34 votes for various minor-party or write-in candidates.

The presidential election witnessed an increase in voter participation in some sections of Philadelphia, veteran observers said. At the Norman Blumberg Apartments Community Center, Irene McDonald made sure that everyone who is registered to vote [Read More]

Cecilia Yep has served the Chinatown community for decades. As one of the founders of the Philadelphia Chinatown Development Corp., she has fought what she considers intrusive development, including a proposed stadium near the Vine [Read More]

Past: Sewing Industry Centralized in Callowhill “The sewing industry was very prominent in the Callowhill neighborhood before the early 1990s,” said Bob Weinstein (right). Weinstein’s father bought the building at 1025 Cherry St. for a [Read More]