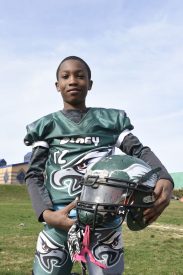 The youths of Philadelphia are growing up in dangerous times. The city’s 2013 Youth Violence Prevention Plan states that, “Over the past six years, 5,051 young Philadelphians ages 14 to 24 have been shot or killed.”

The coaching staff of the Olney Eagles tries to keep their players away from violence by giving them a safe, supportive environment to have fun, learn teamwork and overcome challenges. 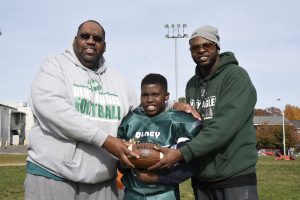 Limited resources in urban school systems contribute to the lack of access to extracurricular activities. Philadelphia’s high poverty rate means that many adolescents don’t have the means to enroll in private programs outside of school. Nationwide, two out of every five black children are living in poverty, according to the Juvenile Offenders and Victims: 2014 National Report.

From growing up on South Eighth Street to teaching tennis at Markward Playground, South Philadelphia Tennis Association (SPTA) President Bryan Hughes has been giving back to the community he calls home. Urging people of all ages to [continue reading…]

Olney: A Community Drawn Together in Ink

Alston Henry prodded his partner with jokes as he drew on his shoulder with a needle. After he finished, he slapped a cloth on the fresh patch of ink, stamped to the shoulder of fellow tattoo [continue reading…]