In the summer of 2003, Joe Cruz showed up to rugby practice for the newly-formed Philadelphia Gryphons. The University of Pennsylvania grad was one of seven people at practice. The Gryphons started as an idea, a new team that was attempting to be assembled by members of New York City’s Gotham Knights and the Washington Renegades, two all-inclusive rugby teams on the East Coast.

Despite the low turn-out for that first practice, Cruz was intrigued.

“I played football growing up so I knew what team sports are about,” he said. “And because it was a ‘gay team,’ it was appealing.” 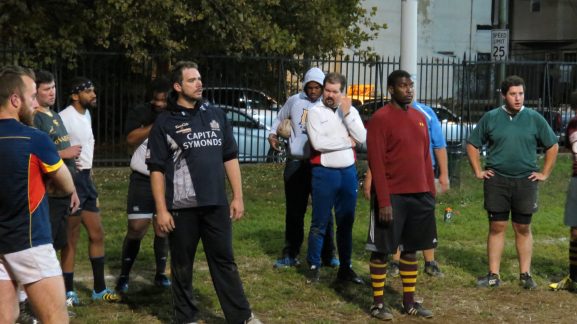 Thirteen years later, Cruz, now 40-years-old, is still a member of the Gryphons. The South Philly-based team is the city’s first and only all-inclusive rugby team. The team strives “to foster a diverse environment that welcomes all athletes, regardless of age, race, fitness level or sexual orientation.”

The Gryphons are members of the Mid-Atlantic Conference in the Eastern Pennsylvania Rugby Union. They play teams from along the East Coast, stretching from Virginia to New York. The Gryphons are the only inclusive team in their league.

The fall season runs from late August until November, consisting of league games in Division 4 of the EPRU. The Gryphons’ spring season consists of mostly local exhibition games from February to May.

The Gryphons are also members of International Gay Rugby, a London-based organization with 61 affiliates around the world. Twenty-three of those teams are in the United States and the Gryphons are the only one in Pennsylvania.

The team has come a long way since that seven-man first practice. This year they set a record with 50 eligible players.

“I’ve been with the team four years and this is the most we’ve had on our roster,” team president Ray Fritz said. “I think we did really well with recruiting last year and retention has been really good. Word of mouth really helps.” 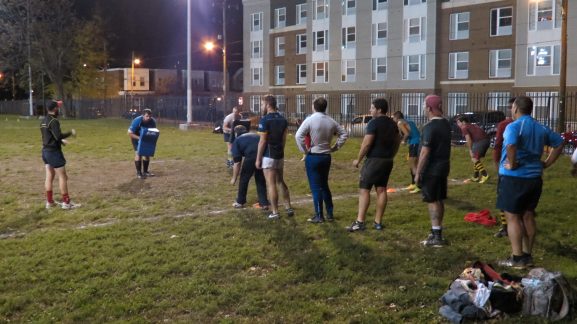 According to PhillyGayCalendar.com, there are 38 LGBT sports organizations in the Philadelphia area. However, most of those are informal, intramural style organizations. While the Gryphons are a mission-based organization looking to combat the stereotypes that surround gay athletes, they take their rugby very seriously.

“We’re very small so there are a lot of sports organizations in the city that cater to or attract the LGBT population,” Cruz said. “But they tend to be co-ed. They tend to be non-contact. They tend to be a lot more casual. We’re playing in the division that requires a lot more commitment than most people are able to do for a hobby.”

“The Gryphons have really given me that opportunity as a gay man to challenge myself in the community and really compete and be a better athlete,” said Less Cardinal, the member-at-large for the Gryphon’s executive board.

One of the Rugby traditions not lost on the Gryphons is the postgame drink-ups. Whoever is the home team hosts a “drink-up” after the game at a local bar for both teams. The drink-ups double as a means of building camaraderie and sportsmanship as well as a way to unwind after a grueling match.

“This team that you’ve been battling on the field for 80 minutes and now all the sudden you can go shake hands with them and talk to them and it just becomes a giant brotherhood,” said team captain Phillip Calhoun.

“We have people tell us we host the best drink ups,” said Fritz. “Just the atmosphere. It gets rowdy.”

While drink-ups are a rugby tradition, the Gryhpons also use them as a means of furthering their progressive mission. Their home bar for drink-ups this season is “Boxers,” a gay bar on the corner of Walnut and Juniper streets in Center City. The Gryphons only hold their drink-ups at gay bars in the city. 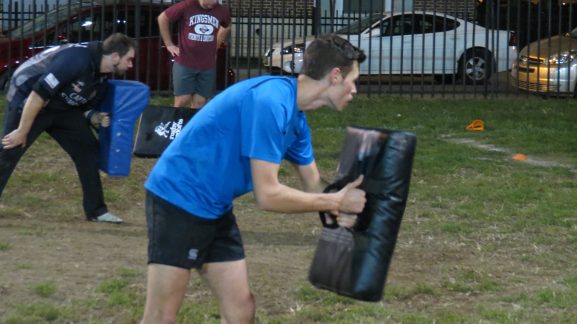 “Drink-ups are at the root of our team,” Fritz said. “In the EPRU, the other teams we play are not necessarily gay teams or all-inclusive teams so we have an opportunity to bring these guys into the city and into our bar and just show how much fun it is.”

The inclusivity of the Gryphons also means allowing non-LGBT players. One of these players is 26-year-old backs captain, Joey Chieco, who understands first-hand the importance of the drink-ups.

“It might be some of those players or away teams only time at a gay bar,” Chieco said. “They can just be exposed and realize that it’s just a bunch of guys hanging out, drinking beers, watching sports.”

For the Gryphons, the marriage between LGBT progressiveness and rugby is thriving. The intensity of the pitch and the unity of the drink-ups provide the rare space where LGBT culture is acknowledged without also bringing a social stigma.

“You see it on the pitch and you see it off the pitch,” Chieco said. “Everyone just forgets about sexuality. It’s unimportant. It’s just teammates and rugby players and the community. It’s a special community to be a part of.”

Bearlesque is a body-positive, gender-inclusive burlesque performance group featuring people of all sexualities. The organization was created in 2014 by Josh Schonewolf and Connor Michalchuk as a one-off show for ‘bears,’ a slang term in [continue reading…]

A recent production by Mauckingbird Theatre Company was set in the 17th century, complete with all the attire, mannerisms and dialogue of the day — and a cell phone. It’s that type of modern twist on classic plays that reflects the origin [continue reading…]