To find some of Philadelphia’s richest athletic history, one has to look no further than the halls of South Philadelphia High School.

Trophy cases and plaques line the corridors, celebrating everyone from Eddie Gottlieb, one of the founding fathers of the NBA in 1946, to Lionel Simmons, a standout star at La Salle University who played for the Sacramento Kings in the 1990s.

But for all of Southern’s athletic accomplishments, many inside the school and the athletic program believe that success, for both the athletes and the school, is not defined by what happens on the field, but what happens off of it. 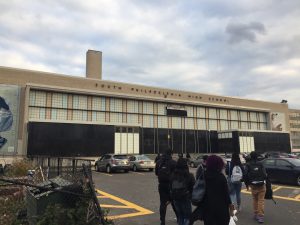 “I always believed athletics gives a kid an opportunity to mature and take on responsibilities outside of school,” said athletic director and head football coach Frank Natale. “There is a certain maturity and discipline they have to have on the field. That carries into the classroom. I really believe that.”

Natale, who has been coaching high school football in Philadelphia since 1973, came to Southern four years ago with hopes of rebuilding the athletic program.

When he arrived, the football team fielded 22 players on varsity and had no junior varsity program. Today, there are 85 football players between the varsity and JV teams.

Southern fields 21 sports teams including some that Natale has added in his tenure, such as girls’ soccer, wrestling and boys’ volleyball. With the addition of so many sports for both genders, Natale believes that the importance of the lessons learned through sports will reach a greater population of the school than ever before.

“Every year, we seem to be adding more sports to Southern, so it appeals to different groups of students in the school,” Natale said. “How you act in certain situations, when things aren’t going your way, this is how you’re going to approach it. Maybe later on in life, when things don’t work out that well, they’ll do the same thing.”

Head basketball coach, Troy Holiday, has seen first-hand the type of impact that sports can have on the ever-impressionable high schoolers, especially compared to students in the classroom.

Holiday, 33, a former basketball standout at Germantown Academy, worked in the biotech field before entering the teaching realm. He now doubles as a coach at Southern and a science teacher at Delaware Valley Charter School.

“I could be teaching kids who don’t like science, don’t like biology,” Holiday said. “They’re there to get a good grade but they don’t really have a passion for it. I come out here with these kids. They love the game. I love the game. And then because we have that in common, we connect in that way.”

For principal Kimlime Chek-Taylor, attracting prospective students to Southern, rather than charter or private schools, has been one of her primary challenges of her first year as principal. Chek-Taylor understands the role of athletics in that struggle.

“One of the reasons to bring more students into our building is to enhance our sports programs,” she said. “We have just about any sport you want to play here. So, we have wrestling. We have basketball. We have boxing. We have bowling. Anything that our students want to participate in, we want to build on that.”

There is a certain irony to this situation for Chek-Taylor, however. Without the appropriate number of students, sports teams will not only struggle to thrive, but to exist.

“When you don’t have enough students to build your sports programs, they won’t be able to fund it,” she said. 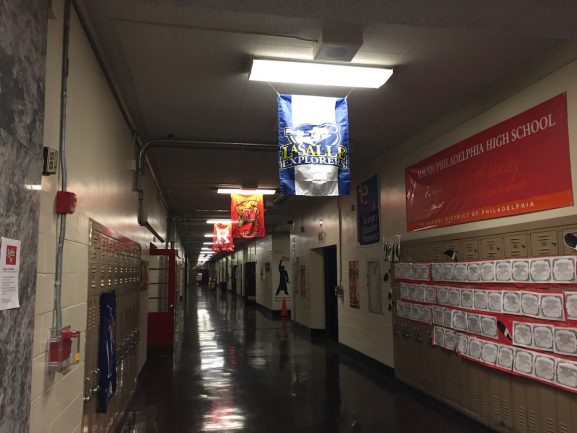 Despite the struggle in enrollment, the attendance rate at Southern is currently sitting at 85 percent, up from 82.5 percent last spring. So while Chek-Taylor has proven she can retain the students at Southern, and thus improve the athletics, convincing them to attend school in the struggling Philadelphia public school system remains difficult.

“It’s just a matter of reaching out to the community and letting them know we are here if they choose to stay close to the neighborhood versus going to travel somewhere else,” she said. “I think that’s our biggest hurdle, getting students into our building and just maintaining the number.”

The success of athletics at Southern has an impact on not only those students who participate in the sports and the school administration, but also the South Philadelphia community.

Public schools in Philadelphia have acted as a community hub for decades. But with enrollment in public schools declining, the local connection has diminished.

“There are a lot of things going on in the district and a lot of it can be a downer,” Holiday said. “But people in the community, people in the area still care about South Philadelphia basketball. It really is a big deal.”

– Text, images and video by Ben McWilliams and Tim Merrick.

Tucked away in Northeast Philadelphia behind Fox Chase Elementary lies Fox Chase Soccer Club. From the outside, it might not appear to be much – a red and white concession stand that doubles as a [continue reading…]

North Philadelphia: Andy German of The Prep Says, “It All Comes Down to Coaching.”

Andy German is about to begin his first season as the head coach of St. Joseph’s Prep’s lacrosse team. He was hired in October, replacing Eric Gregg, who stepped down after a six year tenure. Prior [continue reading…]