Like other parts of the city, Northern Liberties’ housing market has rapidly expanded in recent years. It seems as if every other street is restricted by orange construction barricades. By the time the seasons change, they’re gone, a new building is up and an old brick home is being demolished.

New construction often comes with a wave of younger and wealthier residents. In some instances, the neighborhood’s elderly, who have seen it at its worst, have left.

While some Northern Liberties’ seniors leave for personal reasons, others have simply been priced out. It’s something that gives two of the area’s longtime, remaining residents few mixed feelings. 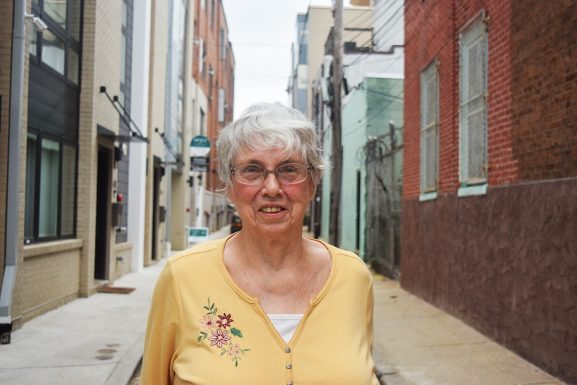 “I hated when there was displacement,” said Mary Dankanis (above), 75, who moved into Northern Liberties in 1945. “That really bothered me a lot. It still does. But it’s a tradeoff.”

Dankanis saw older black residents forced out by landlords who were likely seeking to sell property to higher-paying tenants. She still keeps track of them and says a few have been re-situated.

However, it wasn’t all for the worse. Dankanis said that several of those displaced were living in homes without plumbing. Their houses were dilapidated along with much of the post-industrial neighborhood.

“I think some of them are very much better off,” she said. 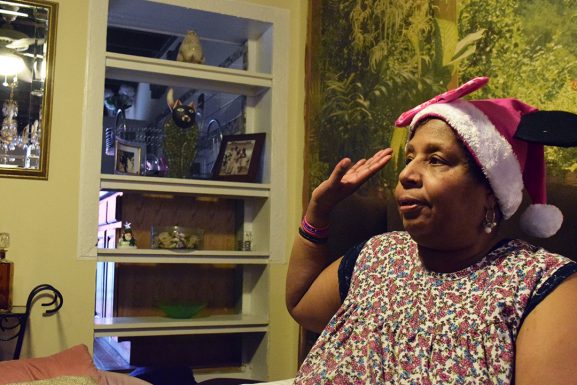 Brenda Semon (above), 64, a 49-year-resident of the neighborhood, noticed how small business owners were initially excited by the wave new residents. But soon after, high taxes and low revenue forced them to close.

She also saw drug dealers move in during the ’80s and ’90s. People she grew up with were stealing from each other. Semon said development has had its ups and downs, with money being the major factor.

“People in the ’90s had to move out,” Semon said. “They keep [raising] our taxes. That’s not right to do that to poor people.”

With new development, typically a hike in taxes hits to those who have lived there for decades. New residents could be given a 10-year property tax abatement on their homes if they make physical improvements. It could be as simple as a kitchen renovation or as big as a new addition.

Areas around Center City have the lowest home-ownership rates in the city, and Northern Liberties is below average with 30-39 percent, according to a 2015 Pew Charitable Trust State of the City report. The median sale price today is $525,000, said real estate agent Kristin McFeely of Philly Home Girls. 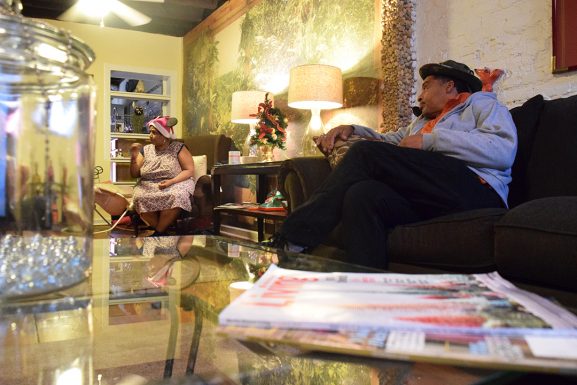 Semon said she bought her current home for about $8,000 in 1980, about $25,000 in 2016 when adjusted for inflation. Parts of her home are decades-old additions blended in with original elements from the early-20th century.

“A lot of people we work with would love to move there,” McFeely said. “It’s the price point they aren’t able to afford.”

McFeely typically sells to young professionals in their late-20s to 40s. She says young families are attracted to the neighborhood’s proximity to good schools and its new single-family homes.

Bart Blatstein, president and CEO of Tower Investments, believes there are still many empty-nesters and older professionals in the neighborhood. His firm owns undeveloped property in Northern Liberties.

In many ways, the neighborhood seems to be going through a renaissance. It used to be the center of industry at a time when Philadelphia was known as the “workshop of the world.” During that time it attracted German, Russian, Polish and Ukrainian immigrants, according to Harry Kyriakodis, author of “Northern Liberties: The Story of a Philadelphia River Ward.”

Today, architecture and real estate development firms have planted their feet here, and more than 5,000 of the area’s approximate 7,400 residents have moved there in the last 25 years.

In this new era for Northern Liberties, many find it hard to say whether real estate developers should accommodate the elderly or make room for young families.

“It’s a unique challenge for Philadelphia and any city with an aging housing stock,” said Anthony Monica, architect at Northern Liberties-based KieranTimberlake.

It may be easy to imagine a grandparent in a retirement home, but the World Health Organization said that the elderly tend to “age in place.” Many want to live in the same home and neighborhood they raised their children in.

Seniors who are aging-in-place in Philadelphia are at risk. Forty-three percent of them live below the poverty level, some personal-care facilities have closed and city’s Division of Housing and Community Development doesn’t have a program to help with home repairs, according to a WHO assessment.

“I love it here, this is my home,” she said. “I don’t have any desire to live any place else.”

-Text, video and images by Alexis Ryan and Kamal Elliott.

Philadelphia is a city rich in history and culture but much has changed since Billy Penn was here. The soon-to-be weekend home for the Pope has more a dozen fortune 500 companies and several large [Read More]

Behind the 18th century home of merchant John Wister and his family exists a garden, a weather station, a bee house and most recently, a hoop house. The hoop house, or high tunnel, was given [Read More]

On the corner of 2nd street and Tioga in Franklinville Philadelphia, a family-run bakery called the La Caribeña Bakery served the community fresh, home-style baked goods for over a decade. Alfredo Rodriguez has owned the [Read More]