Chinatown offers a comforting, reliable picture for the hungry: cooked ducks hanging in shop windows, neon signs glowing with ads for noodle soup and chow fun. Around this time of year, red paper cut-outs and lanterns hang from stores for the celebration of the Lunar New Year.

But for a neighborhood that stretches less than four city blocks east-to-west and five blocks north-to-south, Chinatown’s restaurants boast more than just cuisine from mainland China. In fact, they host flavors from most of the Asia Pacific region. New businesses with younger chefs and owners in particular are starting to offer Asian fusion flavors and a more fresh perspective on Asian dining. Here are five spots in Chinatown where hungry visitors can deviate from the norm.

Sitting less than a block south of the Chinatown Arch of Friendship at 10th and Arch streets, Oishii Poke (top photo and below) is a Hawaiian poke shop, serving several varieties of the new hip dish that recently became popular on the West Coast. 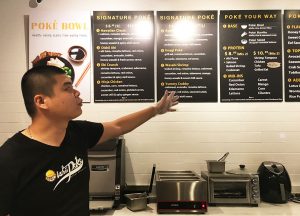 Poke (POH-keh) is traditionally a Hawaiian appetizer or entree made of cubed raw fish, seasoned differently and sometimes served over sushi rice. At Oishii Poke, customers can pick from multiple preset options, like the Oishii Ahi (Ahi tuna, avocado, tobiko, honey wasabi) or the Unagi Poke (grilled eel, edamame, eel sauce), but can also build a bowl from selections of fish, chicken, spices, vegetables and rice.

Owner Andi Chi (left), 27, said he was inspired to work at a poke shop when a similar model had success in Los Angeles.

“This food is healthy and fresh, and it’s a good opportunity,” he said.

Chi said he wanted to open a poke shop because it fit his strengths.

“I’m more [experienced with] the Hawaiian cuisine … and all of it is freshly made,” he said. 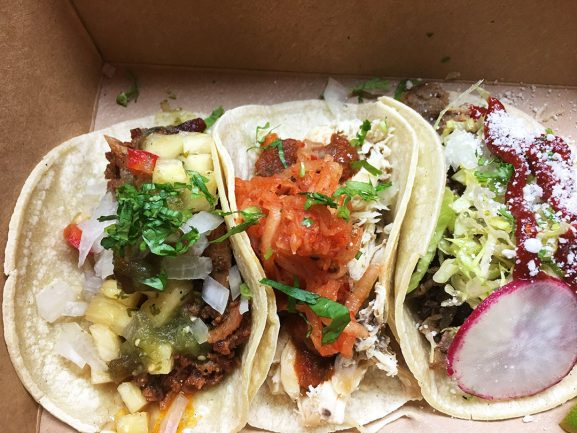 The newly-opened Chinatown Square on the 1000 block of Race Street looks just like an open-air night market in China. Inside, a Mexican-Korean joint called Coreanos sits in the back corner with bar stool-style seating. Coreanos blends the spices of Mexico and Korea to make familiar tacos, rice bowls and other signature dishes with a bit of a Korean twist. 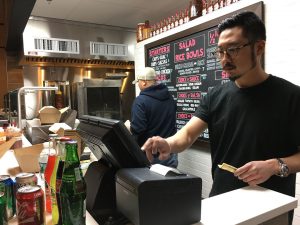 Dave Song (right), 33, is one of the minds behind the new food stand. Growing up in a Korean-American household, he said, influenced the way he thinks about food today. Spaghetti with kimchi on any given night wasn’t out of the ordinary, so opening this type of concept wasn’t difficult to conceive, Song said.

“They’re easy to eat, and who doesn’t like to eat tacos?” he said. “We’re just adding Korean and Mexican flavors to it.”

Like Oishii, the concept first started in Los Angeles, Song said. Some taco options include bulgogi – a sliced ribeye with a soy marinade and gochujang, a savory yet hot Korean spice – and carnitasi, consisting of braised pork, onions and shredded daikon kimchi, a Korean radish. 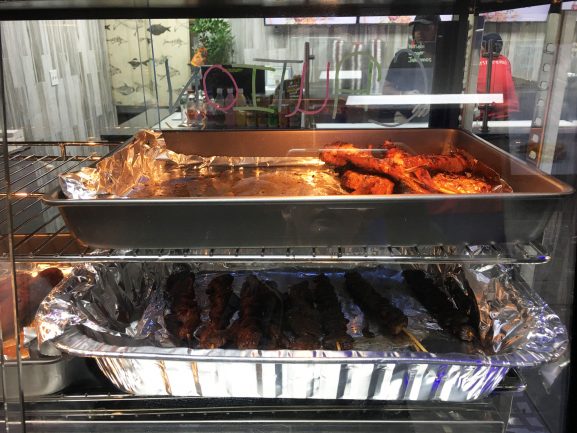 Skewers dominate the menu on this Cambodian-centric grill spot also in the new Chinatown Square market. Cambodian native Janice Soa, 24, said while the call for Cambodian flavors is strong in South Philly, she and her business partner, Chung Ho, decided to bring their spices and grills up north to try out a new audience.

Soa said Cambodian food is unique because of its pastes and spices. In fact, she said, if she and another Cambodian made the same dish, they could taste completely different, depending on which spices they use.

“Most Cambodians know how to do it,” she said of Khmer’s spiced skewers. “You have to have the right ingredients to know what to do.”

Other dishes on the menu include grilled chicken, homemade sausage and papaya salad.

Soa added that perfecting the new business will take time, but she knows there’s a market in Philly for the flavors after a family member saw some success.

“They don’t know what Cambodian food is,” Soa said about new customers. “So, they’re going to question themselves before they try it.” 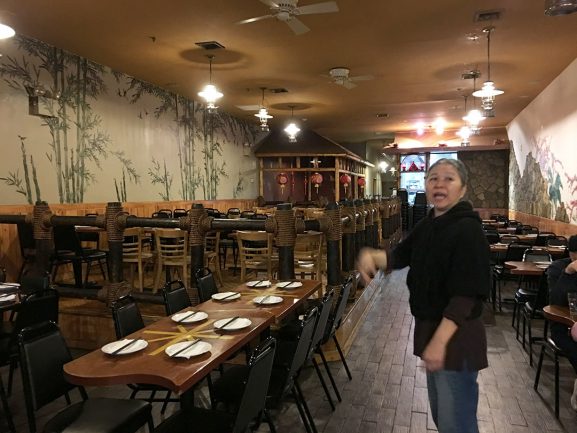 Mooi Goh (above), 56, has spent the past 20 years in Philadelphia and the last few living in Chinatown. The flavors of the Malaysian-style restaurant Banana Leaf where she offers Chinatown eaters the curry-esque spice of Indian food, coconut-based sauces of Malay cuisine and Chinese dishes like beef chow fun.

Most people are looking for spicy, she said, and are just trying Malaysian food for the first time. Centerpieces of the menu include different kinds of green curries, chicken prepared Indian style and seafood broths. 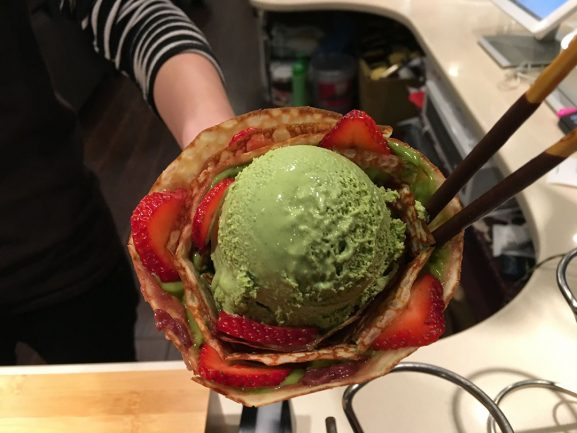 To finish off with dessert, there’s a Japanese crepe shop on 10th Street near Race Street that stands apart because of its sweet treats. Crepes here are made with rice flour, as opposed to the wheat flour typically used to make the French dessert. The store originally started in New York, has since expanded to other cities, and even some suburbs outside Philadelphia. The name stems from the chain’s fast service, and serving dessert in a way that’s unlike its European counterpart. 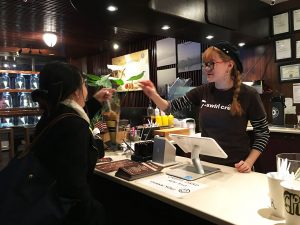 “It’s different with the waffle shape … we do it in a cone instead of a plate,” said Yifan Zhang (right), 21, an employee at the shop.

T-Swirl offers 18 kinds of crepes – both savory and sweet – with ingredients like fruit, seafood and meat. Zhang said the sweeter varieties tend to be best-sellers.

– Text and images by Steve Bohnel and Emily Rolen

As a real-estate developer and architect, Gary Reuben (above) can be found making a living through his work as the owner and operator of the Wolf Building, on Callowhill at 12th Street. After purchasing the building [Read More]

Chinatown: A Community Leader Who Learns from Challenges

For many Chinatown residents, the time had come to see plans for a safer future. The Delaware Valley Regional Planning Commission held an open house Thursday at the Holy Redeemer Chinese Catholic Church and School [Read More]