Kerri Kennedy is the associate general secretary for international programs at the American Friends Service Committee (AFSC) located on Cherry Street in Logan Square. While AFSC does not normally stage protests, Kennedy and the agency organized the Philadelphia March for Humanity on Feb. 3 to express disapproval of President Donald Trump’s executive order banning travel to the U.S. for passport holders from seven Muslim-majority countries. The order also suspended the U.S. refugee program. Kennedy recently spoke about what she and AFSC do and why they organized the protest.

American Friends Service Committee is a Quaker organization. We were founded and have been in Philadelphia for 100 years. We’re a peace and social justice organization, so we do work on immigration rights, we do work on the Syrian conflict. We work in a lot of the places that were named in the executive order.

Why were you and AFSC protesting?

Thomas, this young man, started this website over the weekend, got 5,000 people signed up. But he did not have an organization behind him – he was looking for help. I called him (and) found out he was an 18-year-old college freshman. AFSC is really about empowering youth as agents of change in social movements. So we organized it and kind of mentored him through the process of how you start a protest and a rally, and that’s why we’re here. It’s not like us. We rarely would come up and start a protest by ourselves. We normally do a coalition with others. But it worked and it was great, and we’re excited that we did it. 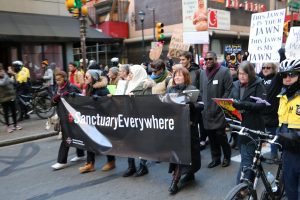 Why do you think it’s important to empower youth?

Because as a Quaker organization we have been involved in some of the most wide-sweeping social change movements in the world. We were for the abolition of slavery, we were very active in the apartheid movement, and we have always worked with youth. We know that youth are the spark. Youth are the people that make things happen. They don’t really have agency or resources behind them to do what I can do with an organization behind me, with tens of millions of dollars behind me. So when we see that energy, we want to feed it. That’s our future. We need young people to do that. So we did it.

Why are you personally a part of the protest?

I oversee all of our peace-building work in places like Syria and Somalia, so this is directly related. But I am often not doing actions in the U.S. because I supervise how we reduce conflicts in Syria. We always knew that U.S. foreign policy harmed communities. In the past two weeks, we have seen that it is getting much worse. We’re supporting refugees in Jordan that are now stuck. There is no place to go. There is no process for them to move forward in, and so that’s what’s moving me to do this action – to make people think deeply about the repercussions of U.S. foreign policy here in the United States and around the world. 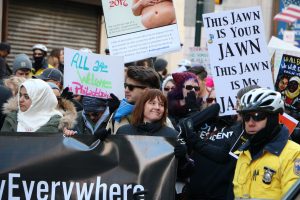 What do you hope the takeaway is from the protest for the people here, and for President Trump if he is listening?

There are people that are really disappointed in the strategies, and people think that the executive orders and the immigration ban is against the American ethos of peace and of welcoming refugees. We are a country built on refugees, made on refugees. I hope that he hears that the American people want to protect American values, and I hope that it inspires people today to keep getting involved with non-violent social action that will hold government accountable to keeping our highest American values. I hope that people see that one person can make a difference. I would not have done this if the young guy did not set up a website. Now we have 5,000 to 8,000 people here. If you get inspired to do something, do it because it can make a difference. 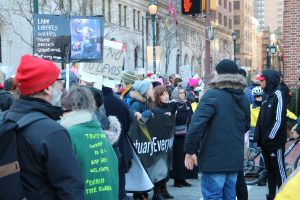 – Text and photos by Stetson Miller and Lindsay Weiner

A new alphabet book designed to promote insight into immigration was announced Friday, Sept. 14, at the kick-off of Philadelphia’s Welcoming Week, a weeklong event meant to forge dialogue between immigrants, non-immigrants, refugees and native [Read More]

During a sunny afternoon at the White House on June 30, President Barack Obama stood at the podium in the Rose Garden and gave a descriptive argument in front of the media about his immigration bill, blaming the [Read More]