For many Chinatown residents, the time had come to see plans for a safer future.

The DVRPC — which is the federally designated metropolitan planning organization that serves Philadelphia and four other Pennsylvania counties and four counties in New Jersey — held the event to receive feedback from community members on its Reviving Vine initiative. The organization seeks to “mitigate speeding” and “develop recommendations to facilitate safe transportation for all modes and users while supporting a vibrant community” along Vine Street near Interstate-676.

“Vine Street serves a variety of users,” DVRPC Executive Director Barry Seymour said. “In some levels, it’s a local road going through the Chinatown neighborhood, but it’s also part of a much larger system. You have people that are coming in through that route to work in the area. You have people that use it as part of the general circulation crosstown. So it’s serving a variety of users, but we wanted to kind of start with the community folks who are on the ground and are really most affected by the form of the road.”

The open house took about six weeks to plan and required about a dozen staff members, said Shoshana Akins, who is a public participation planner for the DVRPC. To inform local residents about the event, the DVRPC collaborated with community organizations. It enlisted the help of the Philadelphia Chinatown Development Corporation — a non-profit organization founded in 1966 that seeks to promote community-driven development and advocate for residents — in distributing flyers and posters.

“With community engagement, it’s just sort of the more, the better because the larger segment of the population we can capture, the better for the project,” said Al Beatty, who is a transportation planner for the DVRPC. “I think it was a pretty good turnout.” 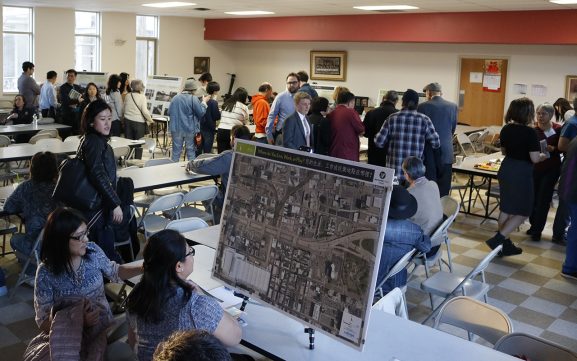 Upon entering the Theresa Hu Center at the church, attendees were directed to a large poster that listed the 15 existing project recommendations for the study area, which is on Vine Street between Broad and 8th streets.

“Potentially all of them could happen, but what that’s really constrained on is funding and also about what the people want,” Akins said.

Recommendations include adding speed limit signs on the portion of Vine Street north of the expressway between 8th and 9th streets, installing curb ramps compliant with the Americans with Disabilities Act and adding crosswalks and pedestrian islands at 8th street.

Implementing a road diet, or removing one of the three travel lanes on a section of Vine Street to reduce crossing distances for pedestrians and slow traffic, is also on the table.

Other options are partially capping the expressway between 10th and 11th streets and near 12th street and replacing sound barrier walls on the portion of Vine Street.

“I think some sections of Vine Street have 9,000 to 10,000 cars for a period of time,” PCDC Executive Director John Chin said. “That’s a lot of automobiles, but when you think about it, that’s a lot of pollution. So and then Vine Street Expressway below has many cars traveling on a daily basis. I think the capping will help reduce pollution because we have a large population living in Chinatown, and we don’t talk a lot about air quality and I think that should be a strong consideration.”

The event was set up so community members could walk around the room to posters that explain each of the recommendations in greater detail. A DVRPC official was at each poster to answer people’s questions and record any comments, questions or concerns they had. One of Samuel Yeck’s concerns is which agency would be in charge of maintaining any greenery planted. 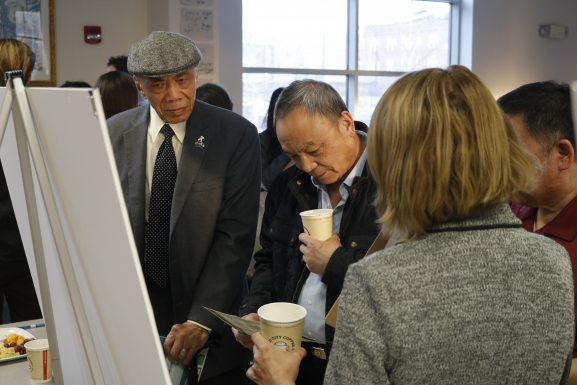 Once they went to every poster, attendees voted on their favorite recommendations and filled out an exit survey that asked questions like, “How frequently do you drive, walk, bike or use a bus stop on Vine Street local between Broad Street and 8th Street?”

The survey also asked respondents to rank their top five recommendations and list any other changes they’d like to see to improve safety and neighborhood connections.

Beatty gave two presentations during the event. Some of the information from the presentation came from a report given at the project’s kickoff meeting in February.

“We won’t have everything perfect, but at least things will be better when we get done,” Yeck added. “We can’t get 100 percent, but even 50 percent is improvement.”

The next steps after Thursday’s meeting are to evaluate the quantitative and qualitative data provided and change the proposed recommendations if needed, Beatty said.

Draft recommendations will be provided to the Technical Advisory Committee, which includes representatives from the city’s Office of the Transportation and Infrastructure Systems and Streets Department, NJ Transit, SEPTA, PCDC, Pennsylvania Department of Transportation and City Council District 1.

Then the DVRPC will make final adjustments based on the TAC’s feedback and write a report in the summer, Beatty said. She encourages people to follow the project’s website.

“We’re really grateful for all of the community engagement we received [Thursday] and the partnerships we’ve had along the way,” Beatty said. “So we’re looking forward to continuing the project.”

After a 20-year-old waitress named Sabina O’Donnell was beaten, raped and strangled in Northern Liberties five years ago, Lawrence Whitaker, chief instructor of at Urban Defense on 6th Street near Fairmount Avenue, knew he needed to do [Read More]

The construction of new houses on Reed Street in Pennsport is expected to bring new and younger tenants into the neighborhood. Long-time residents do not mind the changes but there are a few issues. “This [Read More]