Hidden within a corner of the historic Viking Mill in Kensington is an artists’ space that member Terrill Warrenburg said is named for “the post-World War II period in Germany, a time where artists were able to freely expressive themselves and creatively flourish.”

“The original founders of Little Berlin wanted to tap into that ‘anything goes’ mindset from that era,” Warrenburg said. “That’s the thing I like most about working with this group of people.”

Little Berlin began in 2007 as a collaborative effort between artists Martha Savary and Kristen Neville-Taylor, located in the Berks Warehouse in Kensington. The project eventually grew to include more artists, and in 2010 moved to a bigger space at its current headquarters on Coral Street. It has two rooms: a main area for the primary exhibits and a side room the group refers to as The Annex. 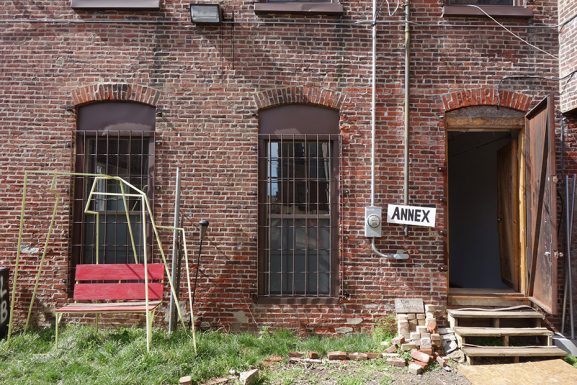 “We all love the relaxed atmosphere that the space provides,” member Luke Leyden said. “Any of us can drop in and do something completely off-the-wall with encouragement from everyone else and no judgment.”

The members of Little Berlin generally take an egalitarian approach to their organization. Each person gets one month to curate a show or exhibit on a rotational basis. They cover a versatile range of mediums, such as painting, photography, sculptures, do-it-yourself installation pieces and experimental works. The group will also occasionally partake in special endeavors, such as hosting poetry nights and barbecues in the Viking Mill courtyard or selling zines and other art materials.

“Our projects can take many different forms, but essentially the space is available for all of our members to carry out a curatorial vision,” member Ethan Patrick Sherman said. “We also have The Annex as an incubator for more intimate, experimental or short-term programming.”

“We try to look for artists that have good organizational skills, humor, personality and creative vision,” Warrenburg said. “It’s easy to tell when someone will be a good match for the group dynamic we already have.” 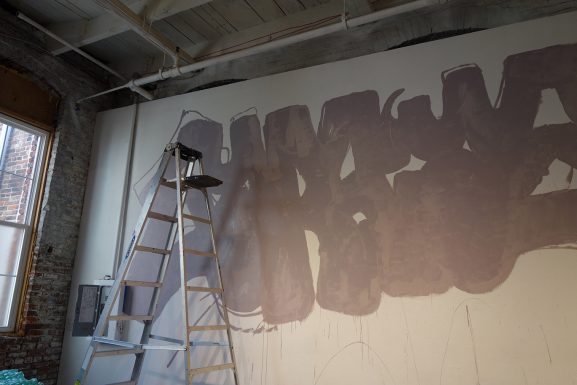 The group currently has 14 main active members and numerous contributors, all from a wide variety of backgrounds and education. Little Berlin generally seeks artists they’re interested in working with, rather than having outsiders pitch potential projects to them. The members themselves joined the group under different circumstances.

“I had a friend that joined about six months before I did, so I learned about the organization through her,” said Sherman. “I had been living and working as an artist in Philadelphia for about a year before joining (and) I was looking for a way to become more involved in the community and to contribute to an ongoing artistic and curatorial dialogue.”

“I recently graduated from Penn, where the fine arts community is intimate and supportive,” Warrenburg said. “I was looking for a new community but also saw Little Berlin as a unique opportunity to interact with the larger Philadelphia art community, have an outlet to support and promote other artists, delve into more experimental practices and focus on curating. When I came across the Little Berlin open call, it was fate.”

The scope of Little Berlin’s projects has spanned multiple themes and premises. Previous exhibits have included research presentations on photographer Magali Duzant’s work, pieces contributed by high school students, panels focused on the presidential election and even a food-centered exhibit combining the human colon and abstract depictions of colonies.

The current exhibit, curated by Warrenburg and on view through April 23, is titled “Found.” It consists of works made entirely from trash picked up around Kensington.

Little Berlin also held a 10th anniversary show in January and February for all current and previous members.

“The members’ show was particularly fun because we got to explore each other’s personal practices and find out more about each other’s work,” Warrenburg said. “It’s something that we don’t do as much of, being a curatorial space. It was also fun to all work together collaboratively on this exhibit. We invited past Little Berlin alumni to join us for the reception. The organization has changed and evolved so much with the shifting membership, and it was interesting to speak with previous members and compare experiences.”

“They’re so cool here and it speaks sort of to the alternative quality and the spontaneity of the group,” said Natalie Kuenzi, an outside artist who will be contributing material for this month’s exhibit. “We found this cool palette and now we’re filling it up and using it in the show.”

Since celebrating its 10th anniversary, Little Berlin already has plans to expand their operations for future projects. The possibility of becoming a nonprofit organization is becoming more and more likely, and opportunities outside of Kensington exist, but the group also wishes to further establish a connection with both the local community around them and other artistic groups as well.

“We’d definitely like to diversify, both in the types of projects we undertake and the people we work with,” Warrenburg said. “We also want to reach out to people who aren’t normally into art and make it more accessible to them.”

– Text, images and video by Cameron Alexander and Kyle Morgan

https://vimeo.com/65267152] Over the past 20 years, the Interfaith Network of Northwest/Northeast Philadelphia has helped 327 families transition out of homelessness and into a life of stability. The main goal of the program is to help [Read More]

A stoop located at the corner of Lawrence and Jefferson streets offered some shelter from the wind and cold rain. On that stoop stood 76-year old Domingo Martinez, with a plate of hot food in [Read More]

If anybody walked through South Philadelphia, it’s easy to see why Philadelphia seems to be well known as an art scene as of late thanks to mosaic glass walls and building-length murals. Across the street [Read More]