In a neighborhood that’s stood in Philadelphia since the 1870s, the Friendship Gate at 10th and Arch streets seems young by comparison—it was finished and dedicated in January 1984.

Chinatown’s symbolic entrance, however, might not have been erected if it weren’t for Dick Doran, an assistant to former mayor William Green. Doran elevated the importance of it above other development projects the Philadelphia Chinatown Development Corp. wanted to accomplish in the late 1970s, according to author Kate Wilson.

“The Philadelphia Chinatown Corporation went in with this list of things they would like to do, and [Doran] went, ‘Well, I don’t know about the housing, but I really like this gate idea,’” said Wilson, a history professor at Georgia State University who has also written a book about Chinatown. “So the gate kind of moved up to the top of the list.”

PCDC recognizes the gate as one of its “most well-known projects,” according to the organization’s 50th anniversary brochure. According to PCDC, the city initially pledged $190,000 for the project in its budget, but then added $5,000, bringing the total cost to $195,000. It was constructed between October 1983 and January 1984 by 12 artisans from Tianjin, Philadelphia’s sister city in China, and dedicated at the end of January 1984.

Construction was difficult due to the cold weather, but “thanks to [PCDC founder] George Moy’s creative heating system”– which included tarps, portable heaters and propane tanks – the artisans were able to complete the project on schedule, according to PCDC’s 50th anniversary brochure.

John Chin, the current executive director of PCDC, said residents of the neighborhood recognize the importance of the gate and the workers who completed it.

“For me, it’s just knowing that the gate serves as a focal point for the community,” he said. “Every day, people pass by it, and I think it reminds us of how long Chinatown has existed in this spot.”

Many residents expressed they liked the gate because it reminds them of home. Those positive feelings also extend to Asian-Americans who live outside of the immediate neighborhood.

“It’s just a significant symbol for the community,” said Henry Chow, 28, who lives in Center City. “You can tell that people take a lot of pride in it.”

The gate stands roughly 40 feet tall and was designed by Sabrina Soong, a Chinese-American architect, said Wilson. It “contains several symbols, such as the phoenix, symbolizing good luck, and the dragon, symbolizing control over water,” according to the Historical Society of Pennsylvania.

Wilson added that the gate was built in Tianjin, and then shipped in pieces to Philadelphia. Its location at 10th and Arch streets was selected by PCDC and city officials in order to provide a visual cue to help pull in tourists.

Along with being a centerpiece for the Chinatown community, Wilson said the gate also opened up trade between Philadelphia and China. The Philadelphia Inquirer reported in October 1982 that the city sent delegates to discuss opportunities between the two cities. One of those delegates was then-Commerce Director Dick Doran, the man later responsible for encouraging PCDC to pursue building the gate. Doran died in January 2007.

“I think the general purpose is to frankly move this city out as thoroughly as possible into the international arena,” Doran told the Inquirer in 1982. “I can’t tell you I’m coming back with specific dollars and cents, but you never know where such a visit leads.”

One of those resulting projects, the gate, was named the Friendship Gate because it is a symbol of friendship and cultural and business exchange between Philadelphia and Tianjin, according to city records. The gate was refurbished in 2008 and rededicated later that year, Wilson said.

About a decade later, the gate still stands, although its two columns have started to chip at the bottom. Residents and tourists have also staked a claim, attaching dozens of stickers to those columns. 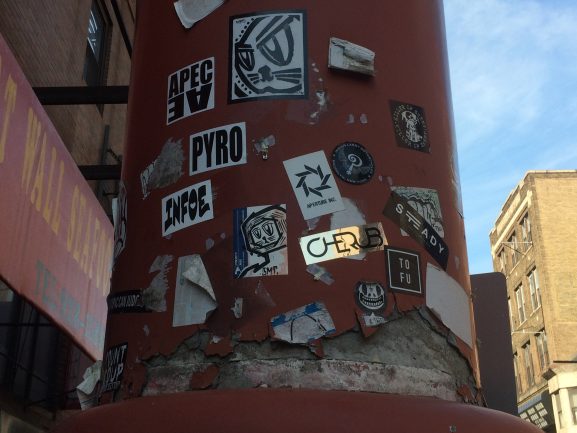 Reports when it was built, however, indicated its presence helped signify that Chinatown was undergoing important stages of redevelopment, and also receiving more monetary and political support from city officials.

Wilson said that along with serving as symbolic entrance to the neighborhood, Chinatown’s gate shows the Chinese population’s resilience.

“It’s huge – it’s massive,” Wilson said. “It’s not going anywhere, right? And I think that’s important, too, because one of the reasons Chinatown is so important to people is because it is the historic place for Asians in the city. It’s the origin point. And it’s important to say, ‘Hey, we’ve been here since the 1870s in this spot and we’re not going anywhere.’ This is a community that has survived, it’s renewed itself, it’s rebuilt itself, it’s been there for a long time … and the gate embodies that.”

For many Chinatown residents, the time had come to see plans for a safer future. The Delaware Valley Regional Planning Commission held an open house Thursday at the Holy Redeemer Chinese Catholic Church and School [continue reading…]

Past: Sewing Industry Centralized in Callowhill “The sewing industry was very prominent in the Callowhill neighborhood before the early 1990s,” said Bob Weinstein (right). Weinstein’s father bought the building at 1025 Cherry St. for a [continue reading…]