Celeste DiNucci remembers exactly where she was and what she was doing during the early hours of morning when she and the rest of the public arts world found out that President Donald Trump announced his 2018 fiscal year Budget Blueprint plan, which proposed the elimination of the National Endowment for the Arts (NEA).

“I remember I was in my bed and I got the call from [the director of the Painted Bride], and we were sort of in shock,” said Celeste DiNuucci, director of development at the Painted Bride Arts Center, “I jumped out of bed and headed to the office to start making calls and tried to figure out what was going to happen next.” 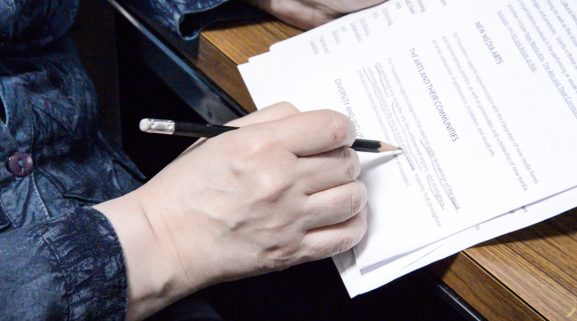 The NEA receives federal government funding, which is given to state and regional art councils who will then distribute the money regionally.

DiNucci notes that support from the government, especially local government for public arts, could be in danger with the shut down of the NEA. The Painted Bride mostly relies on public funding to support local artists and for programing events and workshops for its community, according to DiNucci.

“We receive money from the NEA each year, usually in the five-digit range, and that might not seem like a lot in the grand scheme of things, but for a local artist, that could mean the world,” said DiNucci, “I find that creative people are the some of the most resourceful people; what most people can do with just a small amount of money, creatives can do so much more with. We are used to having to make the best out of so little.”

The Painted Bride received a $45,000 grant from the NEA to support their program, Healing Arts through Replicable Practice (HARP). HARP, in partnership with Drexel University, serves patients from Healing Hurt People (HHP), a hospital-based program through Drexel to address trauma and physical and emotional needs of patients through the arts. According to DiNucci, without the grant, the program will likely be understaffed or shutdown altogether.

In addition to the Painted Bride, other Philadelphia arts organizations such as the Asian Arts Initiative, 1812 Productions, Academy of Vocal Arts, African American Museum in Philadelphia, Arden Theatre Company, Art Reach and several others received NEA grants ranging from $10,000 to $35,000.

According to Matthew Serio, program director at the Pennsylvania Council for the Arts, most of the NEA funding allocated to the state of Pennsylvania goes to Harrisburg and Philadelphia, and for good reason.

“We really like to think of Philadelphia as being the Athens of America,” said Serio. “I think that it’s a huge blow to the arts community when the government doesn’t prioritize funding for the arts. People in Pennsylvania is very invested in their community and want to see that investment become something that everyone can enjoy.”

Not only do these grants have a major monetary value, but funding also serves a symbolic purpose, encouraging private donors to support their local arts centers.

“For an artist to get money from the National Endowment for the Arts is a real vote of confidence,” said DiNucci. “It acts as seed money to attract other donors. It is a legitimizing factor that can bring out the generosity of other donors to say that this is something that is important that you are supporting.”

For other organizations like Philadelphia Young Playwrights (PYP), a Philadelphia arts organization that serves under-privileged students by teaching them literacy and self-advocacy, the shutdown of the NEA would have an immediate impact on the organization’s ability to serve students.

According to Nelson-Haynes, executive director of PYP, the NEA’s funding and grant allocation accounts for about 33 percent of the PYP’s budget. Without that funding, programing for students will likely suffer.

“We receive significant funding from the NEA and those cuts would be devastating to an organization like ours,” said Nelson-Haynes.

Nelson-Haynes wants supporters of the budget to understand the impact that cut will have on students, especially students from a diverse schooling system such as Philadelphia, not only in terms of race, gender or sexuality, but also in the way students learn. 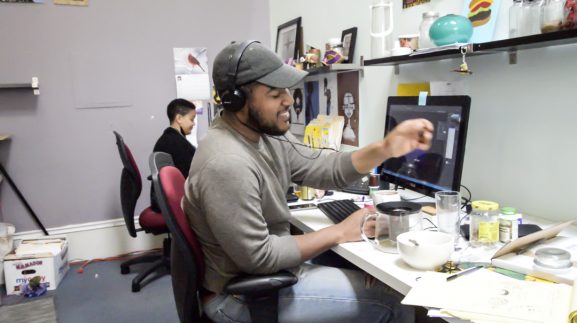 Nelson-Haynes said that the organization serves a diverse demographic of about 21,000 students a year. The students that PYP supports often include students who don’t learn in a traditional school setting.

“A lot of times when students come to us, they are the outliers in schools,” said Nelson-Haynes. “They’re not in a particular clique […] they maybe in the corner daydreaming, and the teacher yells at them, ‘Hey, focus.’ It’s important for these students to know that there is a community for them here that allows them to flourish. Without that sort of support, the students would suffer.”

Although the announcement meant bad news for PYP, it was also less of a shock. Many organizations have been preparing for this scenario for years, and for Nelson-Haynes, it was just a matter of time.

“We’ve been preparing for this for years,” said Nelson-Haynes. “I mean, historically, funding for the arts has always been lacking, especially in public education. That’s why it is so important to have organizations like PYP around that can supplement arts education that kids in Philadelphia aren’t able to get in school.”

Local organizations such as PYP and The Painted Bride are now finding funding through alternative sources such as ticketing, sales, merchandising and private donors.

“We’re looking at private donors, ticketing, art merchandising, renting out our facilities, every possible source of revenue that could help us support the community,” said DiNucci. “At a time like this, it’s really important to diversify the way we fund the arts, because not everyone is going to be on board when we talk about funding public art programs.” 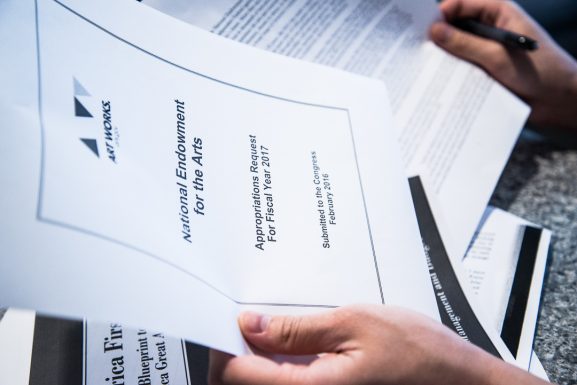 The proposed budget also suggests the elimination of funding for 19 other agencies, including the African Development Foundation, the Corporation for Public Broadcasting, the Institute of Museum and Library Services, the National Endowment for the Humanities, the United States Institute of Peace and the United States Interagency Council on Homelessness among others.