Cultural appropriation is a hot topic in today’s world as people become more and more aware of diversity and the challenges faced by minority groups all around the globe. And the world of tattooing is no exception. Tattoo artist Eliza Mae uses their art form as a way to transform a practice sometimes accused of being culturally appropriative into an act of appreciation.

Mae began tattooing as a healthy way to channel the desire for body modification. Already an artist that worked in mediums such as paint and charcoal, Mae eventually decided to make the switch to tattooing. Now in addition to working at 168 Tattoo Shop in New Jersey, Mae works as a freelance tattoo artist at a studio in Point Breeze.

“I feel blessed that this art form has chosen me as it’s vessel,” Mae said. 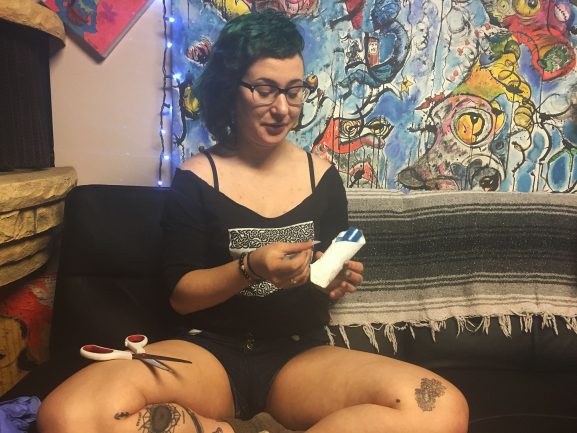 Although the United States’ tattoo industry has shunned the technique of hand poked tattoos in recent years and Pennsylvania is known for relaxed tattoo laws, Mae is certified in BBP, or blood borne pathogen training. This means Mae has taken the required coursework that states with more intense tattooing laws require all artists to obtain.

“Hand poked tattoo artists are sometimes ostracized in the industry,” Mae said. This can lead to unsafe and unclean practices as the ancient technique of hand poking tattoos is moved further and further from tattoo shops into the hands of potentially unqualified people who often attempt to emulate the technique themselves. 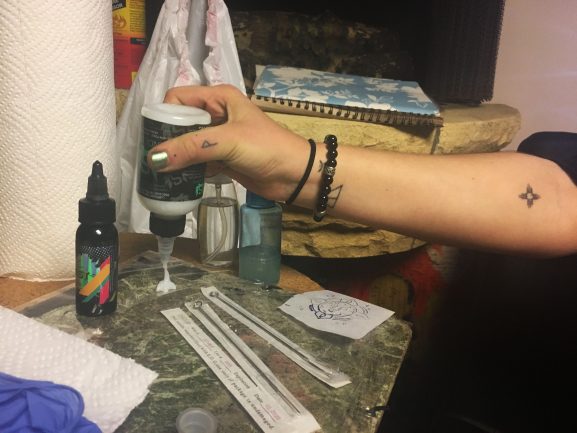 The result has been that some people are still weary of the technique.

“I was always told that machine tattooing was the only sanitary method for tattooing,” Newman said. “Tattoos may have started manually, but now that we have machines, why would we go back?”

Despite this widespread misconception, Mae uses the same sanitation procedures when creating hand-poked tattoos as when using the machine method for tattooing. These precautions include the use of sterilized needles in a sterilized workspace, latex gloves and sanitizing spray. 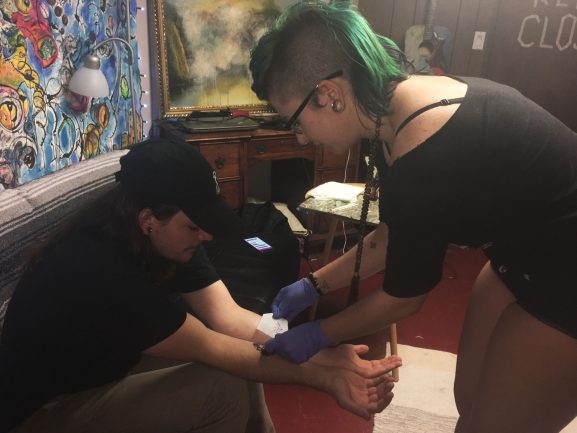 “The technique is present in the spiritual practices of the Aztecs and in India, among others,” Mae said. Mae’s tattoos are modeled after these designs with as much emphasis on the spiritual focus behind it as the tribes originally used.

Tattoo artist Amelia Moore said she feels most comfortable allowing Mae to tattoo her because of Mae’s use of the manual tattooing technique as opposed to the more typical machine approach.

“Eliza’s attention to higher energies is what makes me more comfortable with their process than with most machine using artists,” Moore said. 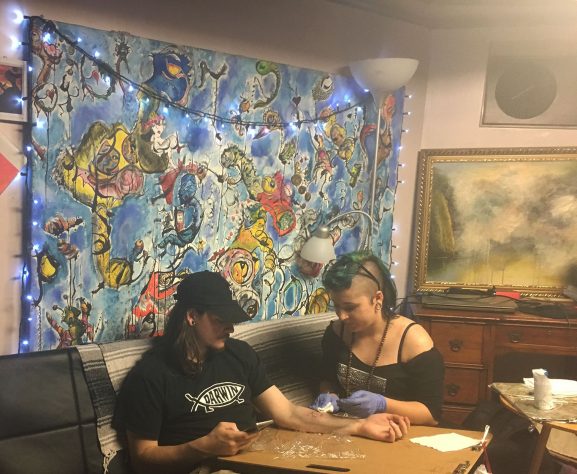 It’s not just physical appearance but also spiritual and mental well-being that are affected when getting a tattoo. Most of Mae’s dedication to the ancient technique of manually creating tattoos comes from respect of the practices through which tattooing was born.

“Tattooing was brought to mainstream America in a way that appealed to wartime men.” Mae said of the beginning of the art form’s culture in America. “I have a level of respect for American traditional tattoo style, but I don’t agree with the way it was brought here ignoring all of the cultural and spiritual significance behind it.”

A spiritual significance is not lost on Mae.

“I identify as an eclectic buddhist,” Mae said.

This influences the tattoo artist’s work and personal life, as Mae draws upon symbolism from buddhism and other religions into every day life. These include sigils and other symbols used in the practice of Wicca, as well as other sacred imagery from ancient cultures such as geometry and Egyptian hieroglyphics.

“Its kind of like going to the hairdresser,” Mae said of intimate conversations with clients. “Whenever you’re going somewhere and allowing someone to modify a part of your body, that affects your entire being.”

Because of the intimate nature of manually creating a tattoo, Mae described the process as less surgical and more personal as than clients might experience at a tattoo parlor that uses only machine tattooing techniques.

“You get to determine just how deep into the skin you’re placing the ink for each individual dot,” said Peter Jones, a tattoo artist and friend of Mae’s, about the technique. Mae echoed  the process allows for much more control over things such as shading, how deep into the dermis the ink is lain and line weight, among other things.

Mae said that the process of acquiring a hand-poked tattoo could take more than one meeting.

“I like to have an intimate conversation with my client,” Mae said. “You’re walking out with the experience on your skin forever.”

-Text, images and video by Kayla Babicki and Alexander Bonner.

ArtWell, formerly known as the Arts and Spirituality Center, teaches students to use art and communication to help combat the personal struggles of everyday life. The nonprofit organization, located at 3723 Chestnut St., works with [continue reading…]

https://vimeo.com/90190688] With Fishtown’s booming arts scene came the call for more record stores. “[Fishtown] is much better for us,” said Tom Lax, owner of Philadelphia Records Exchange. “We were on 5th and South [streets], which [continue reading…]

Pennsport: “This is Your Body, Man. It’s a Temple. You Only Get One Shot With It”

Daniel Shernoff arrived in Philadelphia to attend art school. He found his way into a tattoo studio and apprenticed for two years, learning the craft. He now creates body art at Omkara Tattoo, a local tattoo [continue reading…]