It was a mild Wednesday night at Kingsessing Park in West Philadelphia when a group of friends and nearby residents gathered to play a game of softball, thus beginning their weekly summer tradition.

Ten years ago, a group of punk rock die-hards bonded over the passion that they shared outside of music: baseball. The group started by playing pick-up softball games in the neighborhood and soon named themselves the West Philly Waste.

“I liked the idea of providing a free weekly event where folks could bring their dogs and hang out,” said Katie Jacoby, one of the team’s founders. “It was also a great way to meet new people since you’d learn folks’ names by having a catch or playing on the same team.”

The Waste has morphed since its founding, adding new members, and is now a weekly Sandlot-style game open to the community. 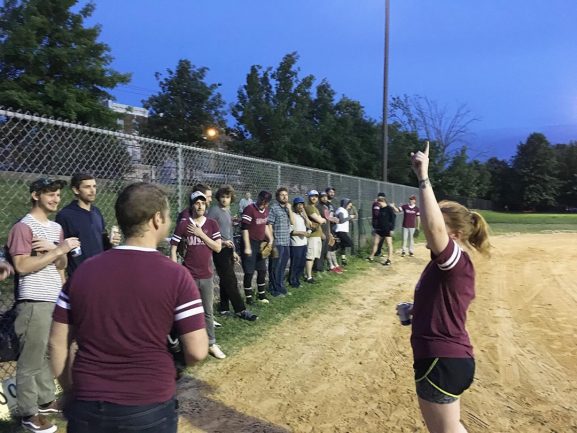 “People find out through word of mouth,” said Carlo Frese, who has been playing for about three years and now helps run the team. “There are still people in the community who have been playing for most of the 10 years.”

Frese said that those who have been around the longest help the current core of players keep the same aesthetic with which the team was founded.

“We’re not a competitive team and nobody pays dues,” Frese said. “We don’t play other teams in the city because they’re too into the jock mentality and we’re anti-that.”

That aesthetic that Frese mentioned makes Wednesday nights feel more like a community event than a baseball game, and only about half of the people who showed up to Kingsessing Park last Wednesday actually played in the game.

Those who weren’t playing helped out by grilling burgers, grabbing an extra case of Hamm’s and cheering on their friends and neighbors from the bleachers on the third base side.

While those who do play try hard to maintain the community feeling that makes the Wednesday night games in West Philadelphia so special, they also play in the Dock Ellis Baseball League, named after the pitcher who infamously threw a no-hitter in 1970 while high on LSD. 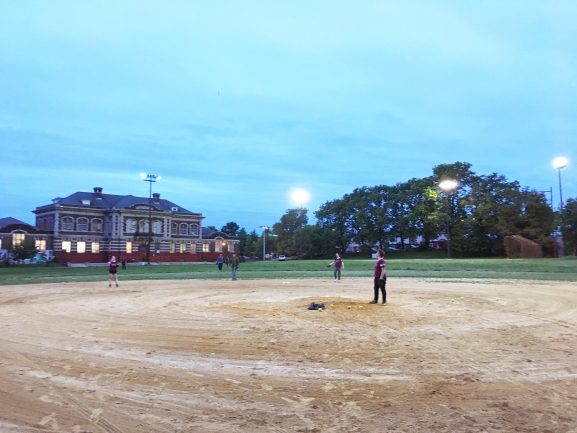 The league allows them to travel and play against teams in other cities. The league was set up by the Pittsburgh Pounders, a team that Frese says has a similar aesthetic to theirs.

As part of the league, the team has traveled to Pittsburgh, West Virginia and Richmond, among other places on the east coast. The Waste has also invited some of those other teams to play tournament games on their home turf.

Brendan O’Connor, who was hesitant at first about the team’s traveling, has since learned to love the Waste’s occasional excursions.

“I think it is in the spirit of early baseball,” O’Connor said. “[It’s in] the spirit of more modern players like Bill Lee and Oil Can Boyd, who do barnstorming tours.”

Despite their occasional travel, the Waste’s simple Wednesday night get-togethers are still the staple of their group.

Their May 24 game, which they dubbed “Opening Day,” attracted dozens of people from the neighborhood. If the beginning of this summer was any indication, it will be a busy summer for the Waste at Kingsessing Park.

Twenty two years ago, Mantua’s only grocery store, located on 34th Street, burned to the ground. Since then, the neighborhood has never had a grocery store to call its own, forcing those living there to [continue reading…]