Sam Holloschutz — born and raised in Philadelphia — is a board member at the Fairmount Civic Association and the chair of the FCA’s Neighborhood Improvement Committee. He’s also the block captain for the 800 block of N. 29th Street.

Holloschutz is passionate about climate change and Fairmount, and he unites his passions in the small tasks it takes to be environmentally friendly in the city. He maintains public trash cans, installs sewer markers, plans neighborhood cleanups and composts food waste. He works every day with various community associations and neighbors to make Fairmount a more environmentally sustainable neighborhood. 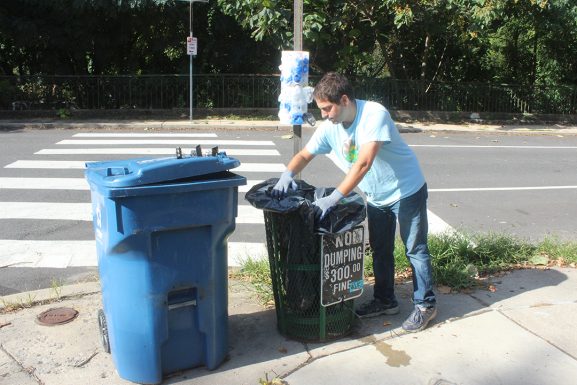 Can you talk about your position with the Fairmount Civic Association?

It just hit me one day. I kind of remember the moment. I just realized I should be doing something involved with my community, because I’m always worried about climate change, pollution and stuff, so I figured there must be something I could do. I think I just Googled “local organizations” and the FCA came up. When I first started, I joined the Neighborhood Improvement Committee, and a year later I took over as chair. Then, I think a year ago, I joined the Board, which makes me a director of the FCA. That’s the history of me joining.

What does the FCA on a regular basis?

We have our director meetings once a month, and then our general meetings for all the members once a month as well. … That’s where we can have local politicians come in, talk about new SEPTA routes, usually a lot of zoning issues, which bring out the most characters. I’ll talk about my cleanups. …. It’s a way to tell our members what’s going on in the neighborhood, allow people to voice their opinions. We have an events committee, a transportation committee, a zoning committee. I think we have 500 or 600 members right now. … We’re kind of an advocacy group for the neighborhood. 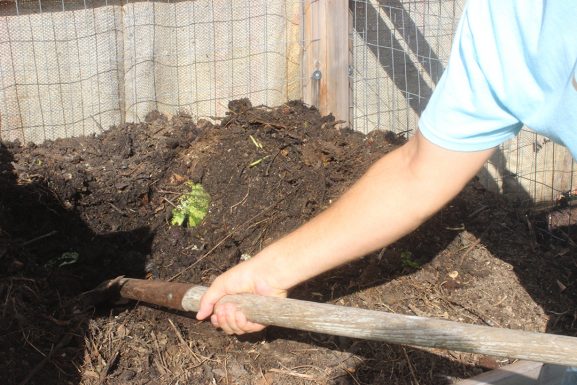 Could you talk a little bit about the Neighborhood Improvement Committee?

I think of it as the environmental committee. That’s what I’m really into. I plan huge cleanups twice a year. I’m actually going to do that today. Every November I’ll throw one, and every April I’ll have another one. Those can bring out like 200 to 300 people. I’ll get local businesses to contribute. I’ve gotten the Sixers to give me tickets. Eastern State is always down to give me cases of water and tickets for the museum. Those are a big deal.

Those are probably the biggest thing I do all year. Other small things, like the sewer marker right there, that little green thing, I put those all over the place. Those just indicate that every that’s going to go down there is going to go to the Schuylkill.

On that stop sign over there, there’s a container for plastic bags. I put those all over the place because the dog waste problem was huge. I put those up months ago and I haven’t refilled them, so the neighbors just keep putting their bags in. That’s awesome.

Otherwise, at our meetings, I’ll talk about the Block Captain program, talk about the Rain Check program from the city where you can get a free rain barrel. That’s about it, little cleanups here and there.

What made you want to become a Block Captain and what are your day-to-day tasks?

I’ve been doing that for two years because I wanted to get a trash can for my street. They’ll give you a free trash can, you just have to chain it up and maintain it. My street had a huge problem with trash, and that’s all but gone now. I also got another trash can for the woods that are nearby. That’s worked out pretty well too.

There aren’t really day-to-day things, but every week I have to empty the trash can, which can definitely be a pain because a lot of people take their household trash and put it in there. That’s really it. Otherwise, from time to time I’ll do cleanups in the surrounding area and put flyers on people’s doors so they know that’s going to happen. 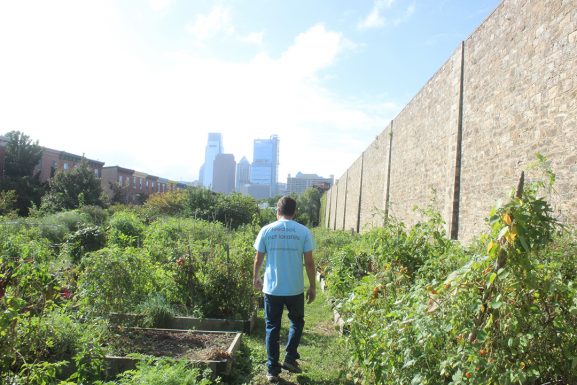 Why is it important to you to get involved in your community in so many different ways?

I read bad news every day, and finally I realized I’m not a kid anymore, I could probably do something about it. That’s why I joined up with these groups. It feels good to make a difference. I take pride in the community. People know who I am now. People will ask me, ‘Where can I recycle this?’ ‘How do I get a street tree?’ Just being proactive was kind of a way to ease all the craziness going on.

-Text and images by Emily Scott and Michaela Winberg.

[vimeo 59862679] Fairmount residents voted last month to support of a bicycle lane starting at Broad Street heading west. Now the neighborhood awaits approval from Spring Garden and Francisville. These residents will be given the opportunity [Read More]

https://vimeo.com/21961403] In 2009, Michael Tucker was one of a handful of students from the Miles School of Business Credit chosen to participate in a special program, The Vineyards at 16th. Located on 16th and Ridge Avenue, [Read More]

As litter from the sea washed upon the white sand beaches of Puerto Rico, Doryán De Angel discovered her zeal. Fueling her fervor for the recovery of Earth’s waterways, the environmentalist is now the community [Read More]