On a Saturday afternoon in mid-September, a block in Kingsessing thrived.

Music blasted from speakers as neighbors danced, played cards and delved into home-cooked food. It’s not the first time that Gregory Benjamin— the block captain who organized the celebration— has brought his community together.

Benjamin grew up on the 5000 block of Springfield Avenue before moving out of the neighborhood for more than a decade. He returned in 2003 and soon realized he wanted to change the neighborhood which had endured blighted houses and violence. Benjamin established the Kingsessing Fifth Division Community of Neighbors, a group of 15 block captains that meets monthly to discuss local issues and organize events for the community. 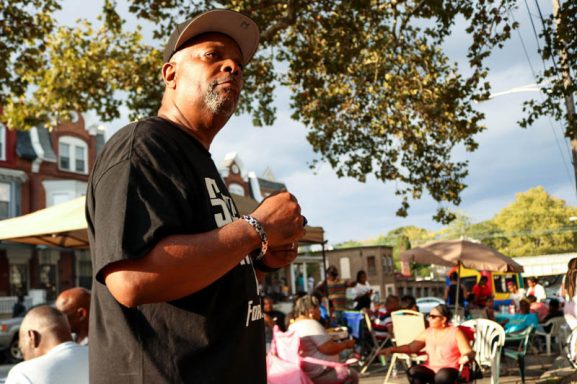 What inspired you to be a block captain?

My wife and I came back here…and when I came on the block I was kind of questioning, ‘do I really want to come here?’ And I was sitting outside one day, and…the Lord kind of like just opened my spirit that this is where you’re going to be. And I was like, looking at the prostitutes, I was looking at all the drugs, I was looking at the drug addicts going in and out of the drug houses. …I used to smoke, snort, all those things…during my younger years. So, I had that opportunity to go through a personal transition in life, and I then wanted to become that therapist that I eventually became.

How did you become a block captain?

I started putting flyers out, just I had like, picked out a certain area, in close proximity and started asking for community meetings. We started out with like..like eight or nine people and as that group, began to meet more. I started sharing with them the importance of each block having a block captain. …We were eventually able to start up. We had about like eight, nine blocks of block captains in this immediate area.

You founded the Kingsessing Fifth Division Community of Neighbors (K5DCN). During meetings, what issues do you discuss?

The library became an issue because that was during the time they were talking about shutting down certain libraries in the area and ours was one of those libraries. So, that allowed us to have an opportunity to voice our concern, that we weren’t pleased with that…closing the library wasn’t an option we wanted to live with. And so, we organized and we had good protests in the community during that time, and that really solidified us as a block captain organization. 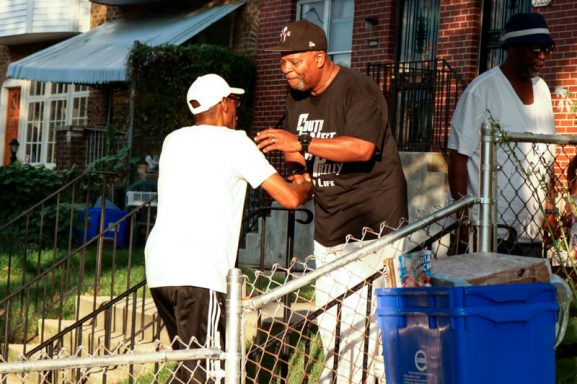 How did the K5DCN develop and grow?

Other blocks in the area began to come to the community meetings, and as a result, we began to just do other activities. We began to look at things, like giving out book bags. We were successful. We didn’t do it this year, because I got, I was hurt, and that slowed us up a little bit. But we’ve given away over 2,300 book bags and we don’t, we get no real [financial] support from anybody. You know, it’s not like we have an agency, or we don’t have a business, or have an elected official … It’s just the hard work of the block captains.

What are other events the K5DCN has coordinated?

Something we implemented two years ago, that we didn’t do this year, we actually had a movie night in [Kingsessing playground], where, you know, people felt kind of intimidated about that kind of project because of the history of that playground. However, the neighbors made it happen. And we worked with the Philadelphia Film Society…So, we really, we had two years of successful movies. Something that people wouldn’t, you know would have thought that we could not have done especially with it being at night. …But we were successful. And I think what that does, is it demonstrates what grassroot people can do. 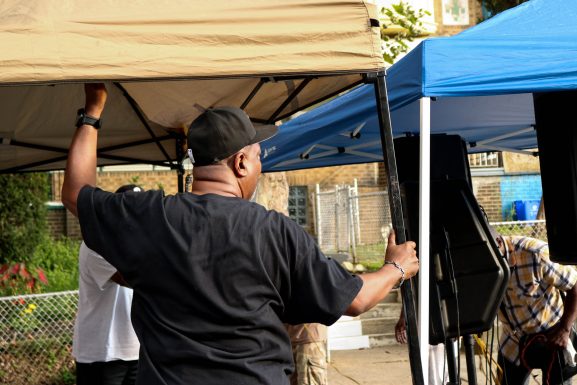 So far, what has been your most memorable moment as a block captain?

It was the first block activity. And I invited the prostitutes and the drug dealers over and invited them to eat and I shared a word with them. …And I was just sharing with them that, you know, they had purpose. They may not really have seen it right then and I was also making it clear that that purpose wasn’t to be prostitutes and drug dealers. …And I think that’s when things started to make a change. Because after that, you know, I actually ran into one of the prostitutes years later who had cleared up, and I asked her, and I told her I wasn’t asking ‘cause I wanted ‘em back. But I did want to know, what was it that actually, you know, made her leave. Well, she shared— well, I guess she was being honest— she shared that the respect they were gaining for me because they’d seen that I was sincere about what I was doing.

-Text and images by Jasmine Sanders and Angela Gervasi.