Soft music filled the office of MilkCrate in South Philadelphia. Morgan Berman, the company’s founder and leader, oversaw her team busy at work to help companies and organizations follow the words of Gandhi and “be the change they want to see in the world.” 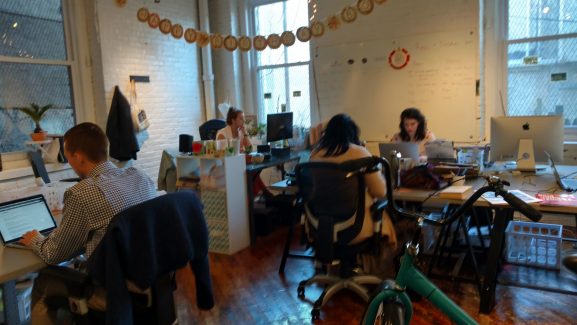 Berman’s company seeks to help those interested in increasing their social responsibility and improve their impact on the world. MilkCrate, founded in September 2013, builds platforms and apps to help companies encourage sustainable practices and lifestyle changes for their employees and members. The app, which Berman called “a Fitbit for doing good,” helps track measures taken to promote these goals, like volunteer hours and dietary changes, earn rewards for their work, and compare with their peers.

Berman built this company as her master’s thesis for Philadelphia University’s sustainable design program. The company grew from a start-up in co-working space to eight employees in a suite on the 1200 block of Carpenter Street. Likewise, her clientele ranges from recognizable brands like Jefferson University (who started with MilkCrate as Philadelphia University) to small non-profits like Repair the World.

“Every day it’s a new opportunity for us to use technology and design to create a solution that helps these organizations do good in the world,” she said. 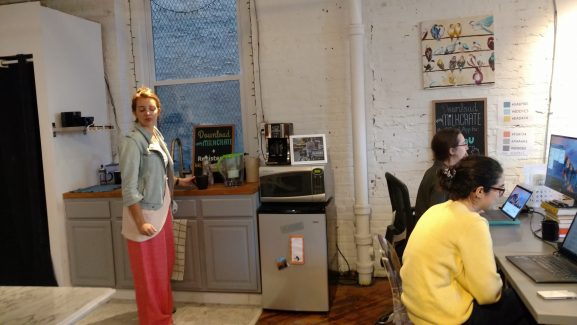 Chelsey Smith, MilkCrate’s client success manager, is in the same sustainable design program, now at Jefferson University. After using the app as a student, she joined the company this year, helping clients customize their app and serving as the contact at MilkCrate.

Smith considered Berman a source of inspiration even before meeting her. From Berman, Smith has learned about the way to start and nurture a business.

For Berman, the pieces came together at a young age. As a child, she found interest in technology, working with computers with a family friend. She also worked at an Apple store in Ardmore before switching to non-profits.

While she was familiar with technology, she was unsure about starting a tech company without seemingly requisite experience. However, she credits the Philadelphia start-up “community” with welcoming her and giving her support to launch MilkCrate.

“Four years ago, I was nobody in the start-up community,” she said. “I didn’t even know about it. Through a few meetings and attending events and getting to know some people, I quickly found that there’s a whole host of people with open arms ready to embrace someone who is trying to start something new. Because of them I was able to grow my business.”

For her efforts, Berman received “Startup of the Year” at the 2015 Young Philly Leads Awards, months after she joined other CEOS at the White House to discuss climate change. 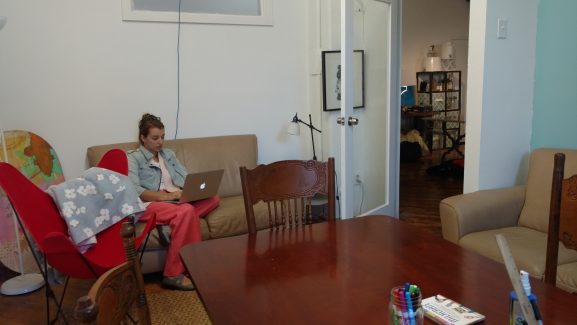 Berman and MilkCrate are part of a changing climate among businesses. More companies are looking to do more to improve the world around them, either by giving back to their community or mitigating their environmental impact. Berman noted three-fourths of the Fortune 500 have some sustainability or corporate responsibility initiatives.

Weston Colby, the company’s business development intern, also studied sustainability while getting his business degree at Arizona State. While he just started in September, he noted the unique opportunity.

“It’s really cool to be around a CEO that is having such an impact in our community in Philadelphia,” he said. “Seeing her taking the initiative of leading us as a group and making a difference in the community …. I really admire her confidence because we are a small company.”

Berman’s experience working at Planned Parenthood, her first job after graduating from William and Mary in 2008, developed her business mindset. After dealing with funding struggles, she learned the necessity of developing financial sustainability.

“It became important to me to build a business that would be self-sustaining and sustainable financially, while doing good in the world,” she said. “That was part of what drove me to find a business model that could use the idea of using technology to make the world a better place, in a way that was financially independent. Coming from that experience of having financial instability in the work that we were doing and trying to flip that so the value we’re trying to create in the world gets compensated.” 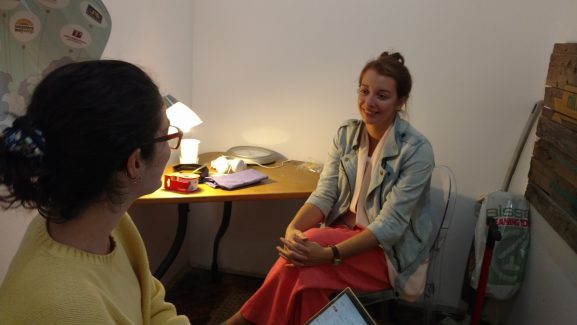 In her time at MilkCrate, Berman has developed a useful niche in the tech community and a necessary product for companies looking to track and analyze employees’ progress of sustainability goals. With the city attempting to attract Amazon and planning further expansion around the Schuylkill, these service companies become key facilitators in transforming Philadelphia into a modern metropolis.

–Text, photos and video by Emerson Max and Marco Cerino.

One attraction of Northern Liberties is its numerous restaurants and shops. The increase in  cafes and restaurants has created a competition between the local business owners who increasingly use social media outlets and mobile apps [continue reading…]

Technology: Why These Penn Kids Dropped Out to Build a Social Networking App

Four University of Pennsylvania students took the year off to promote their mobile application. Michael Powell, Matt Wojcieszek, Adam Elkassas and Arjun Raj Jain all have taken the year off to launch their app, Down [continue reading…]