Meghan Talarowski thinks play can bring anyone together.

“There’s no race, there’s no economic status related to play,” Talarowski said. “Everybody plays. That’s what we do. It’s like a basic human nature.”

Talarowski, a landscape architect, developed such a passion for play that she made it her career. Almost three years ago, she founded Studio Ludo, a nonprofit that designs, studies and advocates for play spaces. She’s blueprinted urban parks in San Francisco and researched playgrounds in London.

Blocks away from her home stands the Kingsessing Library— a 100-year-old building where Talarowski plans to design an outdoor play space for the community.

“Kingsessing [library] actually has a beautiful facade,” Talarowski said. “But it could use a little bit of help.”

In July, the William Penn Foundation awarded the Free Library the Play Terrains Grant— about $200,000 total— to fund “learning oriented public spaces” outside the Cecil B. Moore and Kingsessing libraries.

“One of the things we heard from the library was that residents were interested in more welcoming entrances,” said Cara Ferrentino, a program officer for public space at the William Penn Foundation. “We really think that this project will help do that.”

Recently, promises have resonated stronger than ever to improve Philly’s parks, libraries and recreation centers. Citywide discussion is buzzing around initiatives like Rebuild— a $500 million undertaking that will use soda tax revenue to renovate public facilities.

The Play Terrains project, which will span over 24 months, is still in its tentative beginning stages. Once designed, the play space won’t be installed outside the Kingsessing Branch until the summer or fall of 2018.

The grant’s parameters are simple. Through interactive learning, the space must educate about nature and history in Philadelphia— specifically the city’s watersheds.

For Talarowski, it’s a perfect fit. She doesn’t hesitate to tell people that Philadelphia’s first settlers chose to live in Kingsessing.

“And it was because of water,” Talarowski said, referencing creeks that once flowed into the nearby Schuylkill River.

In the grant application, Talarowski proposed to build models of the watersheds as they once were— before Philadelphia converted many of its creeks into sewer tunnels.

“So, it was going to be this rolling landscape that kids could climb all over,” Talarowski said.

But no design is definite yet.

“We had the idea in order to get the funding, and then it’s kind of evolving through the process,” Talarowski said.

And, the grant provides room for programming— developed in part by Interpret Green, an organization that fosters environmental education while teaching children about digital media. When neighborhoods lack trees, wildlife and landscaping, it’s a problem, founder Craig Johnson said.

“One of the most obvious characteristics of under-resourced neighborhoods is the lack of nature,” Johnson said. “Even in a small area, to begin to reconnect a community with nature, and the benefits of having nature more around them are in general very positive.”

He listed a number of tools that could promote environmental literacy outside the library— a compass rose, magnifying glasses, a pollinator garden to attract butterflies.

Talarowski holds monthly community meetings in the library’s basement, where possibilities for the design remain blurry. Residents toss around ideas like seating for older adults, climbable sculptures for children and tables with built-in chess boards.

“Sometimes, projects come in and they’ll do, like, three community meetings and they’ll be done,” Talarowski said. “But in this case, it seemed like this community wanted to talk a lot more.”

Already, Play Terrains has opened up dialogue— for a neighborhood engulfed in change, even a new play space can bring long-brewing tensions bubbling to the surface.

As Play Terrains slowly began to unfold, Gregory Benjamin received a phone call from a neighbor, asking if he had heard about the project.

“And I said, ‘no,’” said Benjamin, a Kingsessing block captain.

Benjamin has fostered a close relationship with the library since walking into the spacious building as a child to complete homework assignments.

Decades later, he fought to keep it from shutting down.

When former Mayor Michael Nutter proposed the closure of 11 libraries, Benjamin huddled outside the Kingsessing Branch with other neighbors to keep the library open and active.

He’s used the library as a meeting spot for the Kingsessing 5th Division Community of Neighbors, a group of local block captains.

In September, Benjamin sat in the library that had been a constant backdrop in his life— this time to attend a community meeting about Play Terrains. At first, he was skeptical.

After listening to Talarowski discuss the upcoming project, Benjamin asked how much of the community had been informed.

“I felt that at that time, that Meghan should back up a little bit and let’s start over with trying to get this thing more out there in the community,” Benjamin said.

Talarowski, a new resident in West Philadelphia, moved just north of Kingsessing in 2012 to attend graduate school at Penn. Though she lives on the 4800 block of Springfield— a mere three blocks away from Benjamin— something as simple as 49th street can create a sharp divide between neighborhoods.

“When we talk about 49th street and going towards, 47th, 46th, you have, you know, more white,” Benjamin said. “You have more individuals who are more well-off.”

Jonathan Tannen, an urban demographer from West Philadelphia, also grew up aware of the implications of 49th street.  At Princeton, he spent six years tracking what he called the “unofficial” boundary.

Tannen discovered that between 2000 and 2010, the racial divide has shifted two blocks west. In other words, parts of Kingsessing are becoming whiter, and the area— like many in Philadelphia— is still heavily segregated.

“The blocks along those boundaries are flipping very quickly, from a racial standpoint,” Tannen told CityLab in 2016. 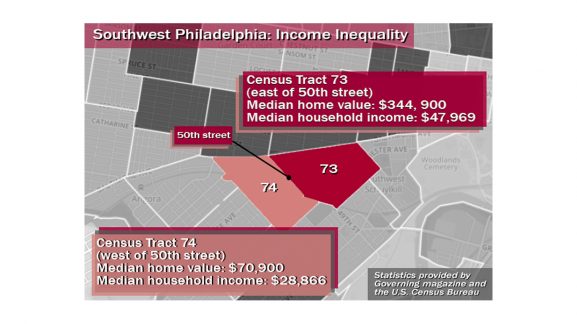 The economic divide is also distinct: U.S. census data shows that once one crosses 51st street and heads west into Kingsessing, the median household income drops by about $19,000.

Racial and economic divides— topics of contention in a gentrifying neighborhood— could cause people to view Talarowski with distrust, Benjamin said.

“Because people were always wondering what was the motivation from anything that’s coming from the other side of 49th street,” Benjamin said.

Talarowski organized a second meeting to discuss the Play Terrains— this time, Benjamin reached out to community members he had known for years and asked them to attend.

“That meeting gave people the opportunity to now have expectations,” Benjamin said.

Decades of involvement in the community has allowed residents to trust him, he said.

And slowly, his apprehension of Play Terrains began to fade.

“It’s never an exact science, but I think at the end of the day, people just want to be heard,” Okdeh said.

For 20 years, Okdeh has worked with the Mural Arts Program, designing and painting murals in residential areas. Working in each neighborhood is a different experience, Okdeh said, but he stressed the importance of community inclusion.

Without it, “there’s no feeling,” Okdeh said.

The Mural Arts Program– which has crafted thousands of Philadelphia murals– implements inclusion in various ways.

“There’s a lot of flyering that takes place,” Okdeh said.

At town hall meetings and writing workshops, he interviews residents to uncover stories and themes for the mural. Often, he said, it’s these conversations that lead him into a design.

Talarowski takes a similar approach, scribbling residents’ ideas onto giant pieces of paper. At the next meeting, she plans to draw different designs with residents.

“You never know the one thing that will be the spark that will like push the project to the next level,” Talarowski said.

On Oct. 15, Talarowski hosted a community party— an event she planned with the library staff to inform residents about Play Terrains. Outside the library, children held magnifying glasses to gourds and plants, colored pictures of animals and splashed paint onto a giant paper map of West Philadelphia.

Talarowski rolled out a timeline of Kingsessing she’d pieced together and draped it over a picnic table.

“It took a long time to tell the story of this place, ‘cause it’s very hidden,” Talarowski said. “And I don’t think it should be. I think that we should like try to bring it back to life.”

There’s no telling what will grace the facade of the Kingsessing Library come 2018. But as Play Terrains continues to develop, community inclusion is a priority for both Talarowski and Benjamin.

“When people are a part of the process, and that process really resonates, I think they take an ownership in the work,” Okdeh said. “They’re going to be the stewards of the work and they’re gonna want to protect it and they’re gonna feel like it’s theirs. Because it is.”

South Kensington has experienced a high influx of new homeowners, renters and sustainable construction. The new people live amongst the longtime residents. The pattern of gentrification has increased the need for community smoothing through outreach [Read More]

Trash is an issue every community has to deal with. Whether it be where to put it, how to get rid of it or who is in charge of it, there is plenty of room [Read More]