The fiber artist said she always has extra fabric on hand, and after the results of the 2016 presidential election, she turned to her craft to respond to Donald Trump’s win.

More than a year later, Sifuentes has been traveling the country holding workshops to show others how to create their own protest banners, and displaying her work in what is now known as the “Protest Banner Lending Library,” which allows patrons to check out their own banners.

The library, which began at the Chicago Cultural Center, is now temporarily on display at the Asian Arts Initiative as part of the exhibition “Those Who Talk Back,” which also features another project by Sifuentes. The library will be on display throughout April 6 at the arts and culture nonprofit in Chinatown North.

“I have heard people say that they feel helpless or that they don’t know how exactly to take political action,” said Asian Arts Initiative’s Director of Programs Carol Zou. “So, what I think is wonderful about the ‘Protest Banner Lending Library’ is it actually shows you a concrete method of creating a banner and taking it to the street. So, making art becomes your method of political action.”

Sifuentes said that because the banners can exist outside a gallery space, they are more accessible to the general public. Sifuentes added that creating accessible artwork is important to her.

“Really the marker of how I look at it is through the lens of my parents as immigrants, working at dry cleaners,” Sifuentes said. “How would they approach this artwork? And so, that’s kind of how I think through my practice and my projects.”

New York-based artist Kameron Neal, 26, visited “Those Who Talk Back” on its opening night in February when he was in town for a show he was part of at Vox Populi.

“I love the idea of framing it as a library instead of it being static pieces on a wall,” Neal said of the work. “People can interact with it and use it in their actual lives… Because it feels like we’re in a historic moment and years from now these will be the fabric that remains.”

Sifuentes said in the past banners have been checked out by theater troupes and even teachers who hang them in their classrooms.

For the current exhibition, Sifuentes and Zou worked together to come up with banners about Philadelphia-specific issues, such as mass incarceration and immigration in light of Philly’s sanctuary city status. Visitors can check out these banners for the length of the exhibition.

“I definitely support a lot of the signs I see,” said Nicolas Robinson, 26, a political science graduate student at Temple University who also attended opening night.

Robinson added that he was struck by a banner with a quote by South African anti-apartheid and human rights activist Desmond Tutu. The banner reads: “If you are neutral in situations of injustice, you have chosen the side of the oppressor.” 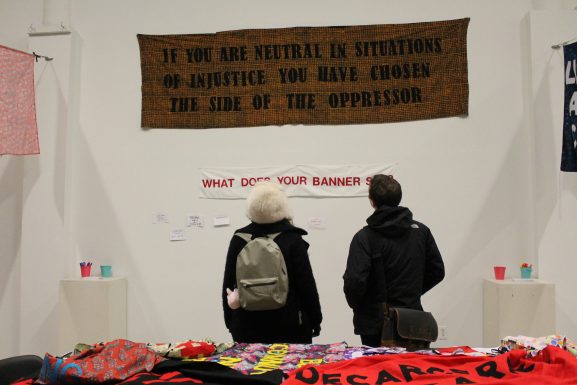 “It kind of paraphrases the first historian that I really began to admire, Howard Zinn, and he says that you can’t be neutral on a moving train,” Robinson said.

Zou also said the same Tutu banner struck her most of those from the show.

“I don’t think we remain neutral in these situations,” Zou said. “And this is not a neutral show.”

The next banner making workshop will be led by Sifuentes at the Asian Arts Initiative on March 17 from 2 to 5 p.m. There is limited space and those who are interested can register here.

One of the greatest challenges musicians face is how to make a living off their craft. Rob Swift and Tom Williamson, members of the band, The Rivals, are attempting to supplement their band income with [continue reading…]

In today’s world, it is easier than ever to get one’s name out there. Social media and other websites have given artists the ability push their names out there with only a click of their [continue reading…]

In what appears to be a nondescript building on North 11th Street in Callowhill  (sometimes referred to as the Loft District), an organization of artists and art galleries have established spaces to work and show their talents [continue reading…]