Brian Hamilton, the founder of smallsound/bigsound, says his business was started by accident.

He spends his days designing and building guitar pedals from a loft in Fishtown, but did not always think of his passion for music as a business.

From a young age, Hamilton had an interest in music and sound modification. Hamilton started playing the piano in his teenage years.

“I was at a friend’s house and they had a piano,” Hamilton said, laughing. “I thought it would be really fun to play and I did. It was a good experience.”

He started to play piano seriously after that. Hamilton studied music at Berklee College of Music in Boston for three years. While in college, he experimented with music and different sound modification methods.

“I started playing keyboards and started playing in bands,” Hamilton said. “During that time, I started getting into pedals and using pedals on keyboards. It was tough at the time to find stuff that was really good for keyboards, so I felt like I should just try to do it myself.” 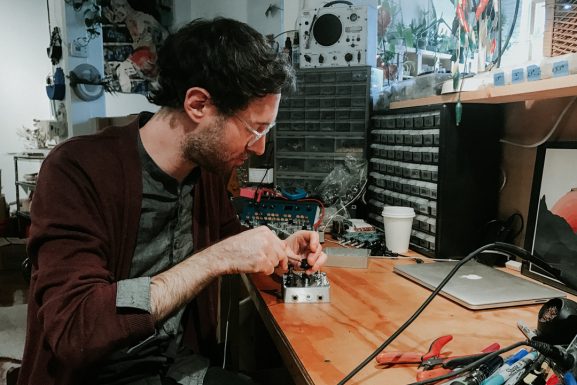 Hamilton took classes that allowed him to learn more about sound modification and circuit building. He used the information from his classes and online research to start building pedals.

“I was already interested in signal flow and signal processing, so I just tried to apply some of those thoughts to the process of building guitar pedals,” Hamilton said. “It felt pretty natural.”

Hamilton later took his passion for music and circuit bending and turned it into a career.

“I didn’t intend for it to be a business,” Hamilton said. “When I first started learning about circuit design and pedal modification and circuit bending, it was just a fun, little thing I was doing.”

“It was years of just making stuff, modifying things, making stuff for friends and for myself,” Hamilton said.

Hamilton said he sold his first few pedals while living in Detroit. Hamilton was jobless and living with his ex-girlfriend. He said he used his time without work on the pedals.

“I just didn’t have a job when I was there and was only focusing on learning more about pedal building and manufacturing,” he said. “While I was there, it was this really great time to do as much as I could. I sold one or two pedals and it started to feel a little more real.”

Hamilton then moved to New York City and began selling his pedals in Main Drag, a local music store in Brooklyn.

“They were really nice to take my stuff on,” Hamilton said. “I think they’ve always supported local people, even if you’re super unknown.”

People began talking about Hamilton’s pedals on online forums and the pedals began to sell.

Hamilton moved to Philly and took his passion for modifying sound with him. After moving to Philly, Hamilton joined a band and toured frequently. He quit his day job so he was able to tour more often and to create and sell pedals as his full-time job.

Currently, Hamilton is the only person working for smallsound/bigsound. The company had an employee for a year before Hamilton decided to do the work himself, as he feels he works that way the best.

Each pedal from smallsound/bigsound starts with a design on paper. According to Hamilton, the design process is the lengthiest part of making a finished pedal. 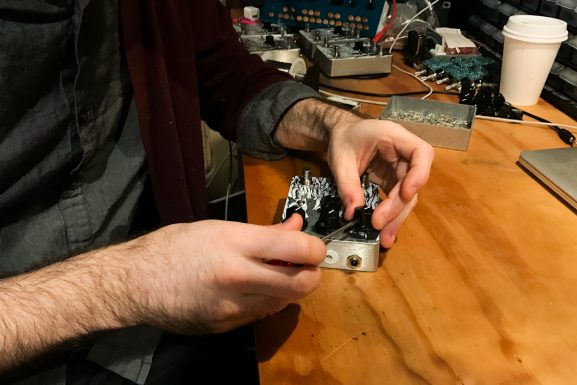 “The designing of the circuit, laying it out, and making artwork, all those things take tons of time,” Hamilton said. “But then, once you do that you can make one in like less than hour.”

Hamilton does everything, but screen-printing the designs on the smallsound/bigsound pedals. He has a local company, Juxtaprints, transfer the graphics on his pedals.

“A lot of people choose to outsource that work and get it done in like China or something like that,” Hamilton said of manufacturing processes. “I always try to do things as local as possible. I mean, it’s nice it’s a handmade thing. But at some point, you have to balance. Hopefully, that will free my time up for more design work.”

Hamilton said he has two favorite parts of his job. According to Hamilton, the design process of creating an original product is one of his favorite aspects of his job. Hamilton likes the excitement of experimenting with different sound components. He said slight changes in components can create completely different sounds. Hamilton said the design process of a pedal is similar to writing a song or painting. 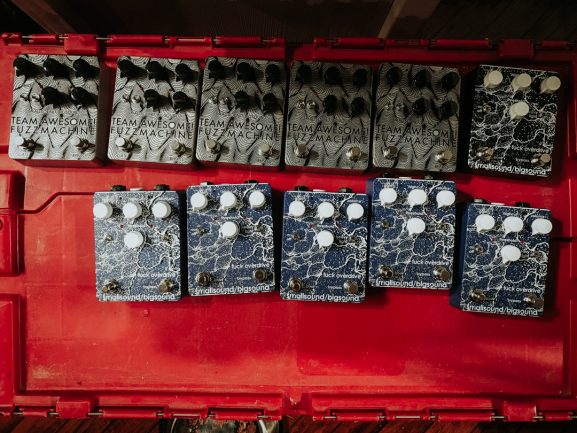 Hamilton’s other favorite part of his job is seeing what people create with his pedals. Touring allows him to do that on a global scale. According to Hamilton, he has met customers throughout America and other countries. He cites Norway and the U.K. as some of the furthest places he has met fans of his pedals.

Brian Hamilton is not the only person who enjoys the effects of smallsound/bigsound pedals. Local Philly musicians and bigger bands enjoy the sound and aesthetic of Hamilton’s handmade pedals.

“It pretty much immediately seemed to line up with my sensibilities,” Morrison said. “I don’t use a ton of effects. But I love a solid, versatile distortion pedal. Over the years, I’ve gone through two dozen, and the one I keep coming back to is the Fuck Overdrive.”

According to Morrison, the sound quality of smallsound/bigsound pedals is unlike other pedals.

“Sonically, it fits the sound I try to attain,” Morrison said. “The trap that a lot of distortion pedals fall into is that you lose a large portion of the volume as soon as you activate it. This one does NOT! I constantly find new ways to use it.”

Morrison says Hamilton’s care for the work he does is reflected in the pedals.

“He seems to really care about what he does and that comes off in the quality of his pedals,” Morrison said.

Morrison isn’t the only local musician that enjoys the pedals from smallsound/bigsound.

Evan Bernard, vocalist and guitarist of Philadelphia based band The Superweaks, also is an avid user of Hamilton’s pedals. Bernard found smallsound/bigsound by finding Brian Hamilton on an online forum dedicated to guitar pedals. After talking online, the men realized they were both local.

“I offered to help him out in the shop,” Bernard said. “When we hung out he went into detail about his background in synthesis and his approach for building, which seemed to follow a different course than most builders. I was immediately interested, and he let me try all sorts of pedals. I soon after bought a Team Awesome Fuzz Machine, which has been one of The Superweaks main bass fuzzes since our incarnation.” 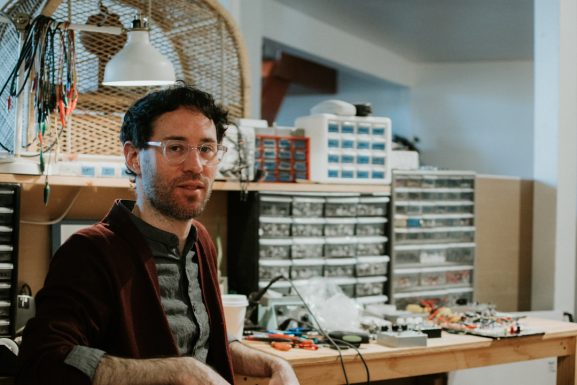 While smallsound/bigsound has become more popular, Hamilton still hopes to grow the company, while maintaining its original mission.

“I think that whenever you have small makers of things, they come at it from a creative standpoint,” Hamilton said. “It’s not always about making money. So, I’m not maximizing profits. It’s like maximizing creativity. I feel like I’m trying to inspire that in other people.”

Hamilton said he hopes to open a shop in Philadelphia in the next few years.

“Timeline is a little dicey, but we bought a place in Fishtown,” Hamilton said. “We’re going to open a little retail spot.”

-Text, video and images by Katie Donahue and Erin Marhefka.

When Lauren Cassady first saw the photos on Facebook, she was infuriated.  A friend of hers from the East Kensington neighborhood of Philadelphia had posted pictures of the side of a building with a large [continue reading…]

Roger Artigiani talks about his arena like he is showing off a prized possession. “This is what we have planned for the one wall,” he said while proudly showing a picture of a mural of [continue reading…]

What happens when community outreach and real estate development culminate into an artistic outlet for Philadelphians? The New Kensington Community Development Corporation, one of the many community non-profit organizations that help serve the Fishtown/Kensington [continue reading…]