The city unveiled the revamped street sign with a ceremony on the morning of Sept. 29, honoring the legacy of Wayne Allen, a late football coach and community leader. Above, Hunting Park resident Robert Hampton removes the plastic to reveal the sign at Ninth and Cayuga streets.

Allen passed away in 2017 of a heart attack. He co-founded and served as head coach for the North Philly Aztecs football program, a cornerstone youth program in the neighborhood. 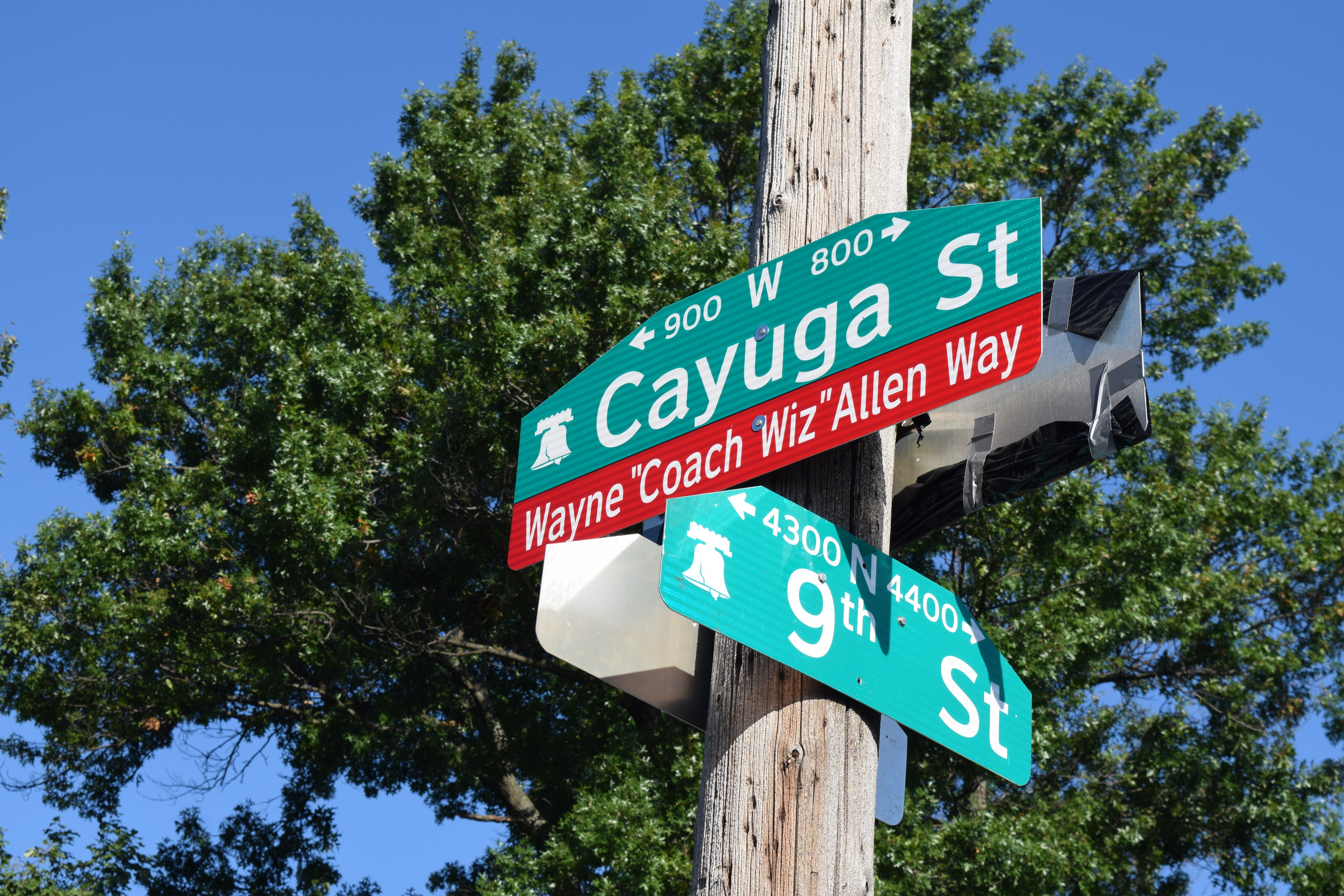 The Aztecs program provides mentorship and educational opportunities to steer youth away from a life of drugs and violence. Thousands of children ages 5 to 16 have passed through the program since its founding in 1993.

At the ceremony, Allen’s friends and family spoke to community members, including Aztecs players and cheerleaders. Allen’s sister Renee Allen (below, far left) joked in her speech that her brother always made the Aztecs his first priority. 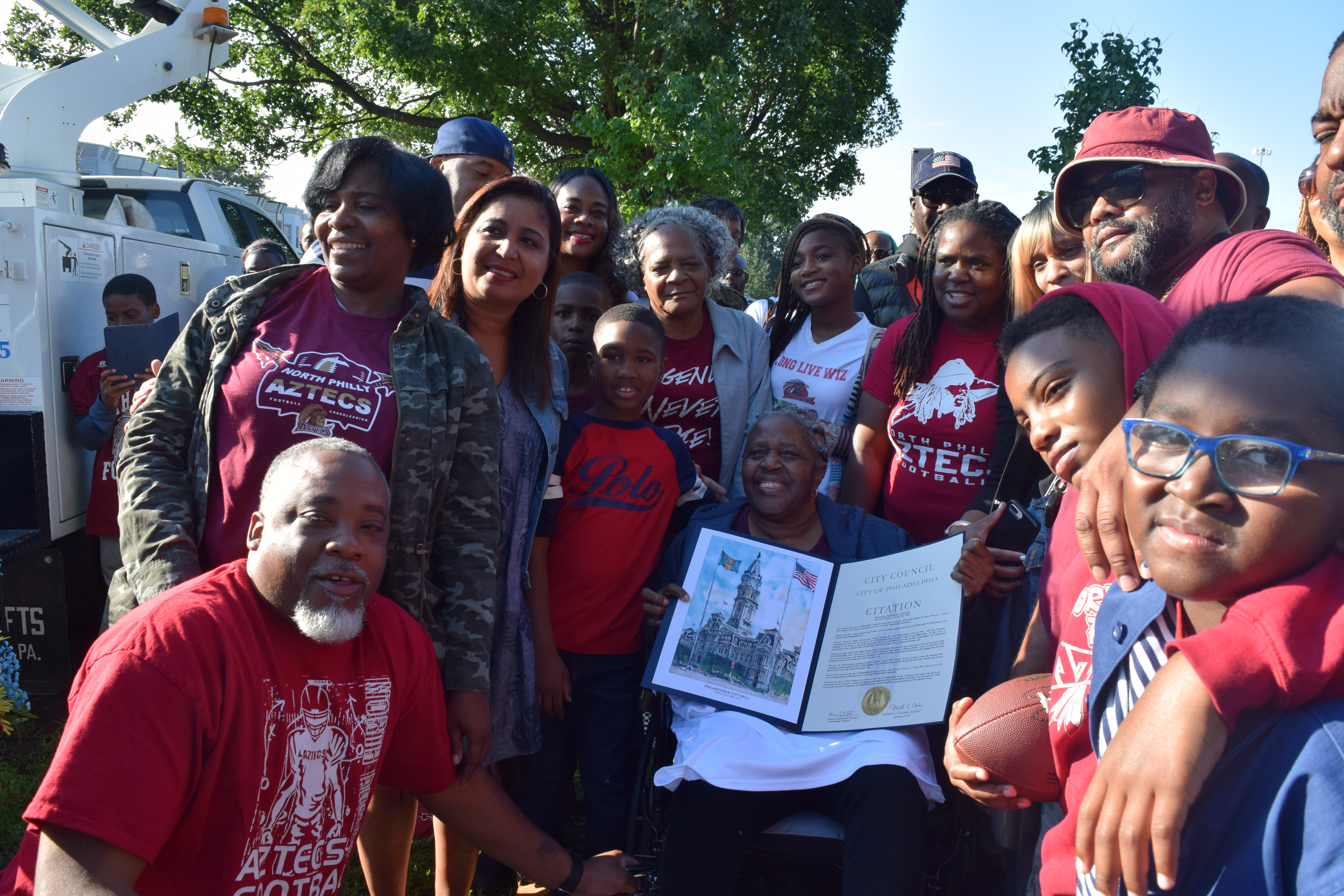 “When the organization started, with him and his friends, everything was on the back burner,” she said. “Family, back burner. Funerals, back burner. It was all about the team.”

Councilwoman Maria Quiñones-Sánchez (above, third from left) attended and spoke at the ceremony, joined by several Philadelphia Parks & Recreation employees. The city worked closely with Allen’s family and the Aztecs’ community to rename the block.

“We thought this was appropriate because this is kind of the loop where kids practice, run, jog,” Quiñones-Sánchez said. “It’s just a small gesture compared to the thousands of hours he spent here.”

Leroy Fisher, president of the Aztecs program and of Hunting Park United, knows firsthand the impact Allen had on kids in the program.

“[They] respected and understood that he had their back, that he supported and loved them completely,” he said. “He was a hard coach, but he was loving coach. And today is a reflection of that.” 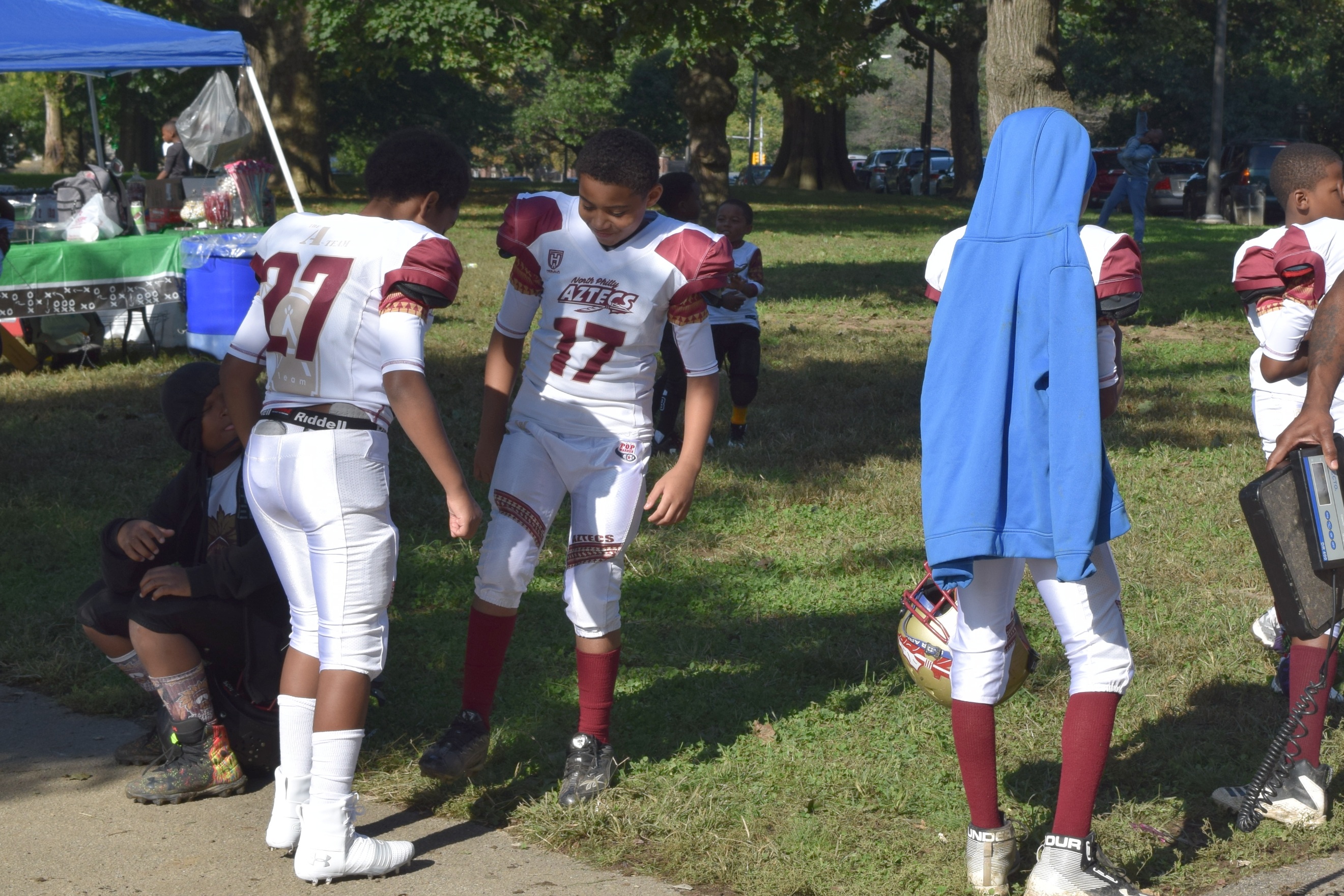 Ryan Harris, 32, is a former Hunting Park resident and joined the Aztecs when he was 10 years old. He now serves on the board of directors, and said that Allen inspired him to start his own nonprofit, As I Plant This Seed. The organization aims to advance the social and educational development of at-risk youth through events held at the Lenfest Center.

“A lot of stuff that I learned on the field applies to my life off the field,” Harris said. “Stay true to yourself. Never give up, stand strong, never quit.”

After the speeches, the crowd moved to the park’s football field to kick off the Aztecs’ weekend-long homecoming tournament. Renee Allen said that her brother was there in spirit.

“I know he’s smiling because it’s not raining today,” she said. “It’s a beautiful day and he’s enjoying it.”

– Text and images by Brianna Baker and Greta Anderson.

Hunting Park is a neighborhood of diversity and change. It is one of the few working poor communities in the city, which means many residents are living on the edge of their means. A drive [continue reading…]