On the blacktop next to McClure Elementary School, Gabriella Gabriel Paez (above) stood in front of what looked like a forest-in-the-making — rows of short and sparse baby trees in planters. She gave them out, free of charge, to families as they left parent-teacher conference night at the school.

Gabriel Paez organized the yard tree giveaway on Nov. 7 in collaboration with TreePhilly, the Parks and Recreation initiative that works to ensure that each Philadelphia neighborhood has at least 30 percent tree canopy coverage.

Gabriel Paez’s work with TreePhilly is part of her efforts as education and community development coordinator for Esperanza, a nonprofit organization that aims to support Hunting Park’s Hispanic population through education, economic development and advocacy. 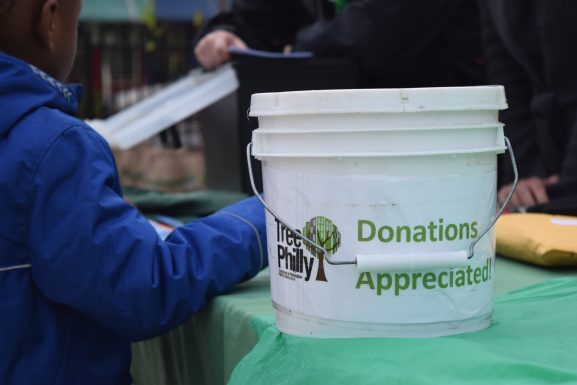 Gabriel Paez has been leading the community development portions of the Esperanza Housing and Economic Development’s (EHED) Hunting Park 2022 Strategic Plan, part of which aims to enhance open space and protect the local environment. Since she entered her role in 2014, Gabriel Paez has organized neighborhood cleanups, promoted the installation of rain barrels, helped create community gardens and more.

She won the Activist of the Year award on Aug.16 at SustainPHL, Green Philly Blog’s annual sustainability awards, for her efforts.

“We depend on this one earth that we have,” Gabriel Paez said. “I know people are looking for ways to go to Mars or something like that, but we need to protect where we live right now — for us, and also for everyone else coming after us.”

Of all her green accomplishments, Gabriel Paez considers tree planting to be the most impactful—and the most urgent. According to Gabriel Paez, before Esperanza began implementing its plan, Hunting Park had only 3.9 percent tree canopy coverage, compared to a citywide average of 18.6 percent. 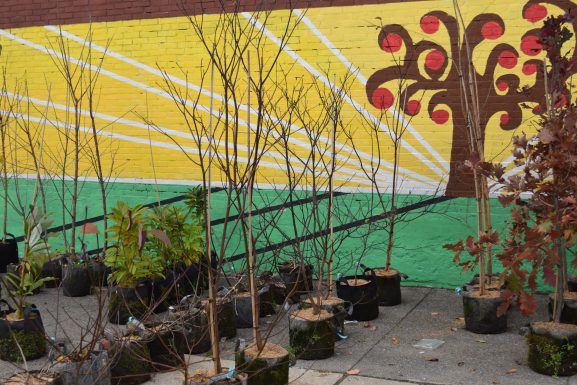 As a result, Hunting Park is one of the hottest neighborhoods in Philadelphia. Philadelphia’s Office of Sustainability reports that its temperatures can reach around 20 degrees higher than other parts of the city.

Mindy Maslin, the project manager for Tree Tenders, said Hunting Park is designated as “priority neighborhood” for tree planting due its low canopy coverage, low household income and high rates of crime. Since Hunting Park’s population is also 65 percent Hispanic, Tree Tenders made its training accessible to Spanish speakers in order to engage the community.

After securing a grant from TD Bank Green Streets to translate its manual and PowerPoint presentations to Spanish, Tree Tenders reached out to Gabriel Paez in order to recruit participants from Hunting Park. 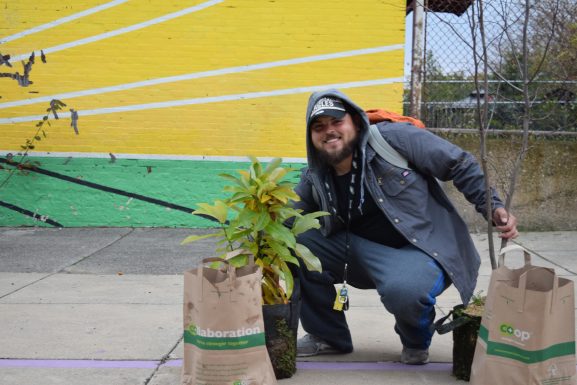 “She’s a person that you can’t say no to,” Maslin said. “She would go up and down blocks where we wouldn’t expect to get such a high response, yet she was more successful than we’ve ever seen in getting people excited about trees.”

Thanks to Gabriel Paez’s efforts, 45 people participated in the Hunting Park program, which Maslin said was double the expected turnout. Twenty-three of those participants, most of whom were Spanish speaking, graduated the program.

“A lot of times our community members do not get involved just because they do not know what’s going on,” Gabriel Paez said. “So breaking the language barrier is extremely important to the work that I do here.”

Leroy Fisher, president of community organization Hunting Park United, has witnessed this effort firsthand. He said while Hunting Park, which has a population split between Latino and African American residents, may seem culturally and linguistically divided, Gabriel Paez uses sustainability to bridge the gap.

“She’s really passionate and caring about making a difference in helping the Latino community and Hunting Park as a whole,” he said. “It’s sad that we sometimes have to break it down and have differences, because we all face the same issues. But she’s good at capturing the message that may get lost in translation or the Latino side may not be able to relate to.” 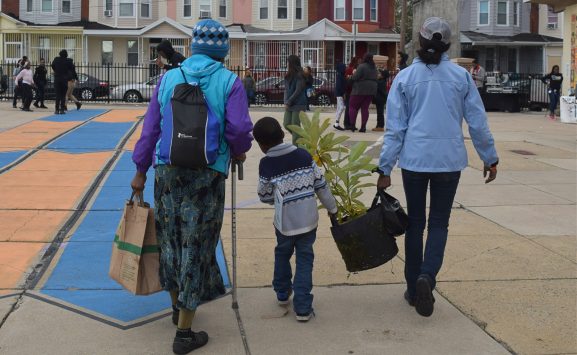 Rallying community support for tree planting has not been easy. Gabriel Paez said neighbors are often reluctant to participate due to urban myths and stigma against urban trees. People believe, for example, that trees break sidewalks and damage pipes.

“It can take me a half-hour just talking to a neighbor explaining how tree roots do not really grow deep,” Gabriel Paez said. “That’s really not in their nature. They mostly grow sideways.”

“It takes a lot patience,” she added. “It’s just about educating people and informing ourselves to inform others.”

Sophie Sarker, the Office of Sustainability’s Equity Fellow, worked with Gabriel Paez during the summer as part of the City’s Beat the Heat pilot project, which aims to study how heat is experienced in Hunting Park and work with residents to implement solutions.

Sarker said Gabriel Paez has a gift for educating community members, especially about the environment.

“You can really just tell how much people value her and really trust her,” Sarkar said. “People are pretty open to trees in Hunting Park and I think that speaks to the work that she’s done. And her wisdom around how to talk about trees to residents in a way that’s nonthreatening and gets all the information necessary across.” 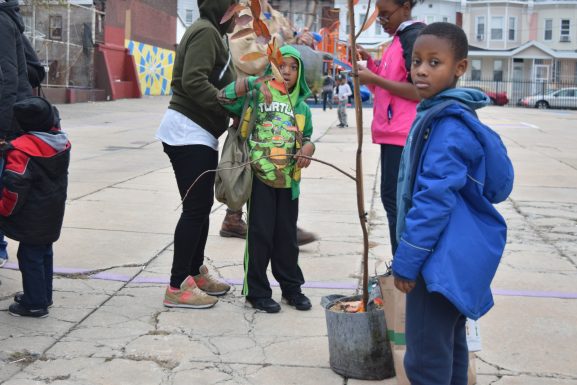 According to Gabriel Paez, her ability to engage her neighbors comes from a deep understanding of Hunting Park, which she has cultivated after 12 years of living and working in the neighborhood.

Gabriel Paez immigrated to the United States from the Dominican Republic with her family in 2006. She attended Esperanza Academy and volunteered with Esperanza as a math and science tutor and substitute teacher as she earned her bachelor’s degree in biology from Eastern University.

For Gabriel Paez, tree planting is a way of giving back to the community that welcomed her and her family to a new country. It improves her neighbors’ quality of life while also bringing them together.

“Neighbors are more likely to sit outside and talk to their neighbors when there’s trees,” she said. “It enhances the sense of community among the residents. It’s the fact that the block looks nicer and more welcoming.” 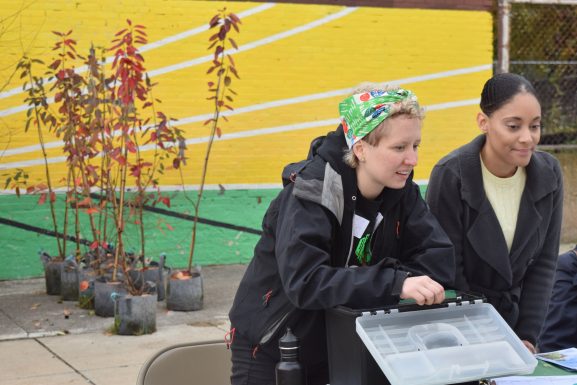 Tree planting, and sustainability initiatives in general, are also ways for Gabriel Paez to exercise her faith. Gabriel Paez describes herself as both a scientist and a Christian, two roles she said inform and enhance each other.

“I don’t see trees as just, ‘Oh well, you’re there,’” she said. “That’s God’s creation and it’s my responsibility to care for it.”

That care extends beyond just plants.

“At the same time when I’m working with a community, I always keep in mind, you know, how can I show God’s love?” she added.

Gabriel Paez is currently a student in the Master of Science in Nonprofit Leadership program at the University of Pennsylvania’s School of Social Policy & Practice, learning how to better serve her community.

For now, that means continuing to giveaway and plant trees. Esperanza aims to plant 48 by the end of November.

It also means connecting the community, one tree, community garden and rain barrel at a time.

“I believe that sustainability is something that we can all come together to work on,” she said. “Understanding that regardless of your race, your gender, your age, it doesn’t matter who you are, where you’ve come from, we all have that in common.”

— Text and images by Brianna Baker.

Tree Tenders is a city-wide program in Philadelphia developed by the Pennsylvania Horticultural Society. The primary mission of the program is to encourage people to volunteer and plant trees in their neighborhood. John Dobbs, coordinator [continue reading…]

Google Hunting Park. Count the articles on death, shootings, stabbings and assaults. Now count those that actually took place in the neighborhood. For over 30 years, Hunting Park residents have been fighting the neighorhood’s notorious [continue reading…]