Candidate’s Night at the East Falls Community Council meeting, a special meeting held each year before primary and general elections, was held at at the East Falls Presbyterian Church on Vaux Street on Oct. 8. The council invites any candidates running for local, state or federal offices whose districts coincide with East Falls to make an appearance, answer questions and discuss pertinent issues.

However, this Candidates’ Night only attracted a single candidate: Pam DeLissio, a Democrat up for her fifth term as a state representative for the 194th Legislative District, which includes parts of Northwest Philadelphia and Montgomery County, including Lower Merion Township. Her opponents, Republican Sean Stevens and Libertarian Matthew Baltsar, did not attend, and neither did candidates for any other office. 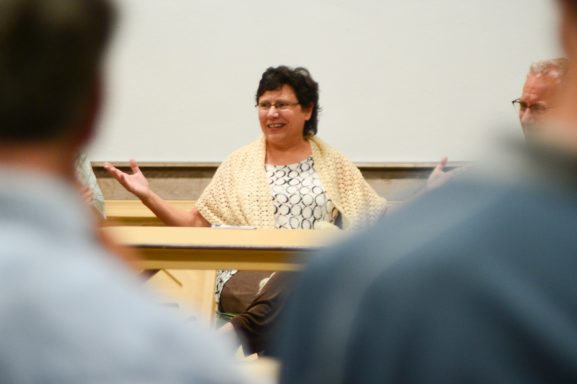 As she addressed the council, DeLissio (pictured above) emphasized the importance of voting, particularly in local and other non-presidential elections.

“East Falls is a very diverse community, where I find the community being really engaged,” she said. “Whether it’s making their parks better, keeping the traffic issues under control or participating with folks like PennDOT and the Streets Department to make things better. So, this level of engagement doesn’t always translate to voter turnout.”

She also discussed the importance of holding a dialogue with her constituents, something she said she takes very seriously.

“Now, my guess is, usually folks at a civic association meeting are engaged,” she said. “They are here, they are present and accounted for, they’re trying to make the community better. So, I suspect that we are sort of preaching to the choir here. But we are hoping for a multiplier effect or an influencer effect.” 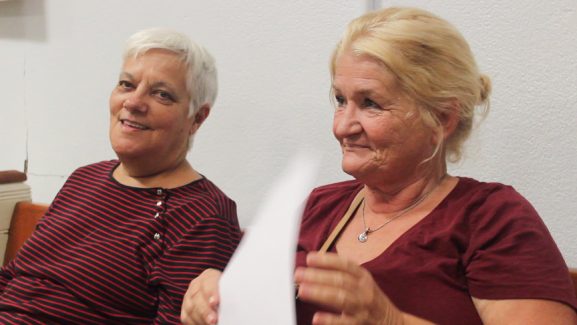 Candidates’ Night aside, the meeting went on with its usual agenda of reports from the treasurer and president, a brief from the town watch, zoning and traffic committee reports and new business.

The traffic committee is particularly popular. With Ridge Avenue, Henry Avenue and Midvale Avenue all running through East Falls, traffic and congestion are constant topics of discussion and something the council looks to improve.

To address this, traffic committee chair John Gillespie announced the committee is working with the city and various politicians to deal with traffic strategically, and not just with individual issues as they arise.

“We need to do something about traffic in the community not just on a piecemeal basis, but on an integrated, community-wide basis so that we’re not doing whack-a-mole,” he said. “We’re trying to come up with an integrated, strategic, rational plan that looks at the community as a whole.”

The first step in this operation is replacing a four-way stop sign intersection of Fox Street and Queen Lane with a roundabout.

“After a year of talking about this, the city has finally decided to move on it,” Gillespie said. “Both roads are abused. The stop signs, to me, are confusing.” 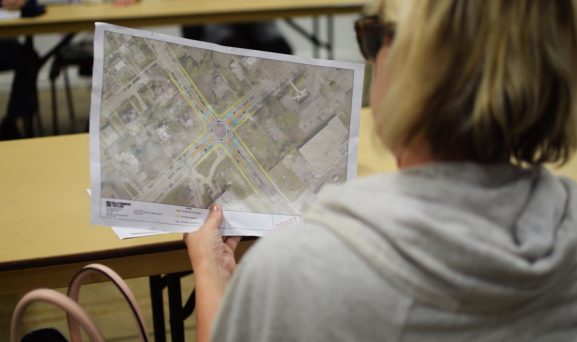 Another common cause of traffic in East Falls is the development patterns that arise along major roads. One development receiving a lot of community attention is a proposed 65-unit apartment building on Midvale Avenue, whose plans don’t address parking space.

“It has the neighbors all upset because there’d be a five, six story building where there’s a gas station now,” said Mary Jean Cunningham, the recording secretary for the community council. “And it’d have stores on the first floor and then apartments above it. It’s right near the train station, and a lot of people already park on Midvale Avenue during the day to use the train. So the question is, if you bring any more cars in there, where are they going to go?”

Also on the agenda for the next zoning committee meeting, Oct. 17 at Billy Murphy’s Irish Saloon, is Penn Charter’s future facilities needs in East Falls.

“They made their first move in what they consider their master facilities plan,” said community council president Bill Epstein (pictured below), referring to the school’s move of a baseball field from one side of School House Lane to the other. 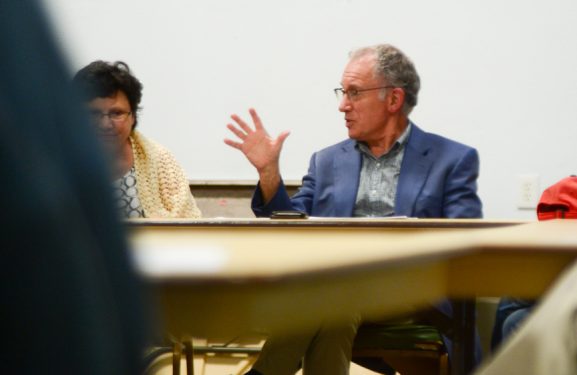 This plan has proven controversial in East Falls, particularly with the community council and the East Falls Historical Society. This is because the plan’s implementation has already necessitated the destruction of the Lycoming House, a beloved historic home on Schoolhouse Lane. Penn Charter tore down the house before the historical society could apply to have it designated as historic.

However, there are buildings and other areas of the plan that have yet to be approved or refused by the community council and the city’s zoning board.

At the end of the meeting, when all reports had been given and after Pam DeLissio had taken her leave, executive council at-large member Robert Rabinowitz brought up new business concerning the location of the meeting itself.

“I’d like to ask if there is an interest in the membership of thinking about moving our regular meeting place from a Main Line Protestant church to, as Pam DeLissio has her meetings, various locations so that there would be more representation of people from this community,” he said.

While his motion was put on hold by Epstein so it could be discussed in an executive council meeting, Rabinowitz went on to explain that by moving her meetings around the district, DeLissio is exposed to a more diverse representation of her constituents and their needs. This was met with some questions concerning location predictability and facility securement, but Rabinowitz went on.

“There are parts of East Falls that are not white, and we are all white people, and I think we ought to be meeting in places where there can be people of color who can also attend the meetings,” Rabinowitz said.

Meg Greenfield, a former community council president and current solar energy committee chair, was quick to reply, “People of color do, on occasion, attend our meetings.”

– Text and photos by Lindsay Hargrave and Geneva Heffernan.

Lee Huang has lived in Spruce Hill for 20 years. For 14 of those years, he has been a homeowner, and for nine years, a parent. He is also a member of the Spruce Hill [continue reading…]

The historic building tucked away on Indian Queen Lane in East Falls may be easy to miss when driving down that small street, but that building now housing Old Academy Players theater is quite notable [continue reading…]

The 2016 Presidential Election has been a topic of conversation throughout Philadelphia, as well as the rest of the nation. The communities East Falls and Germantown are no exception. Despite the many issues spurred in [continue reading…]