During the Brewerytown-Sharswood Community Civic Association’s (BSCCA) meeting on Thursday, Sept. 20, tensions arose around residents’ concerns about the lack of public transportation, as well as a perceived garbage problem.

“This area is a transportation desert,” said Warren McMichael, vice president of the BSCCA. “We have brought this up numerous times; from 29th Street to Ridge Avenue, from Cecil B. Moore to Girard Avenue, there is no public transportation.”

The BSCCA was founded in 2000 by a group of Brewerytown-Sharswood residents who cleaned the streets the night before trash day. In the past 18 years, it established a neighborhood advisory council, has advocated bringing grocery stores to the neighborhood and collaborated with multiple organizations on community improvement initiatives.

The senior residents of Brewerytown are the primary voices behind transportation concerns; they are unable to walk many blocks to the nearest bus or subway station. Also, lower-income people aren’t always able to afford ride-sharing apps to get around the city.

The 57 bus used to serve the community along Master and Jefferson streets, a longtime resident of who has lived in Brewerytown for 44 years told the gathered meeting. For senior residents with fewer options in the neighborhood now, there is more distance between bus stops, and to get to some of the busier parts of the city they have to catch transfers, residents at the meeting said.

After a series of public comments, McMichael announced he will ask SEPTA to attend next month’s general community meeting.

“A few months ago, SEPTA came in here to discuss new buses coming in,” McMichael said. “They were supposed to bring a new bus from 26th Street, but that was objected to by people that live south of that area. So we can bring SEPTA back here and discuss this with them.”

Officials from SEPTA did not return requests for comment. 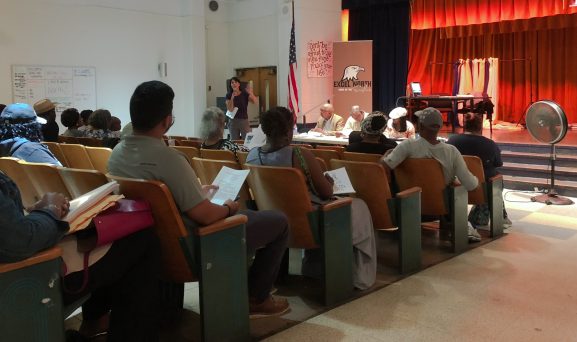 Conversely, Vergia Isley, a resident from Girard Avenue who has lived in the area for 59 years, said she does not believe Brewerytown has a transportation issue.

“I don’t think we have an issue, but it depends where you need to go,” Isley said. “The trolley comes here if you stick around.”

While there are ample trolley stops along Girard Avenue, the trolleys only cover a limited area. The closest subway stop is Cecil B. Moore, which is 1.5 miles away from the center of Brewerytown. There are also handfuls of bus stops around Brewerytown, but if residents want to go to West Philadelphia, 30th Street Station or the airport they have to transfer to other bus lines, to the trolley or just walk.

Also, as the neighborhood continues to develop, parking availability has become sparse. Longtime residents find themselves battling their new neighbors, whose homes typically don’t include parking or garages, for street parking to avoid paying fees or meters or putting cars in lots.

To the relief of hundreds of residents, at the end of February, SEPTA unveiled a plan for a new bus route, 49, connecting Grays Ferry and Brewerytown through University City. It will give easier access to 30th Street Station and the Ben Franklin Parkway, which are areas that residents expressed transportation concerns about.

Route 49 had been proposed twice before February 2018 after SEPTA met with residents of Brewerytown, Grays Ferry, Fairmount and Strawberry Mansion. The route was finally approved on June 28, 2018.

“The Route 49 will be implemented on a one-year experimental basis, with service expected to start in early 2019” according to their press release. SEPTA projects approximately 3,000 riders on this route during weekdays.

Residents at the meeting also expressed concern about trash, with several people telling developers in attendance that new residents tend not to clean up their trash. 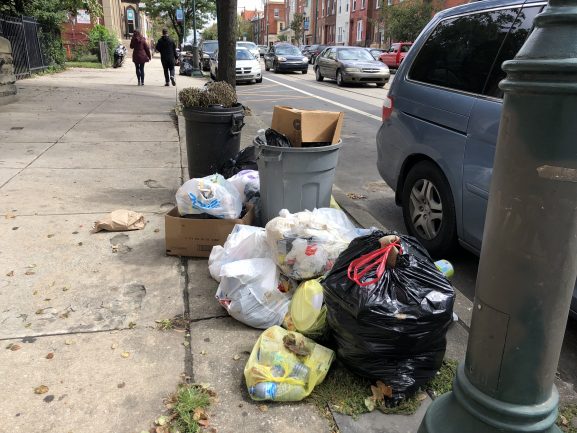 Isley has received citations from the city for her neighbor’s trash.

“I have gotten fined for their trash because it is between two buildings because, it’s as much mine apparently,” she said. “But it’s not really my trash.”

According to the Philadelphia Streets Department, failure to pay or contest this code violation may result in a code enforcement complaint in Municipal Court, which could impose a maximum fine of $300, plus court costs.

“City Hall doesn’t come out as much as they should and if you look around, the neighborhood’s trash is a problem,” said Ashley Elliotc, who has lived in Brewerytown for twenty years.

BSCCA meetings take place every third Thursday of the month at the Camelot Academy on 26th and Jefferson streets and are open to the public.

Images and text by Gail Vivar and Sarah Madaus

The School District of Philadelphia began closing, consolidating and selling off schools in conjunction with its facilities master planning process in 2010. This plan was put into motion in the face of the estimated 70,000 [continue reading…]

The historic Fairhill Burial Ground held its fourth annual astronomy night on April 26, an event where children and adults from the neighborhood are encouraged to come out and join Astronomer Denise Vacca to take [continue reading…]