Members of the Philadelphia POWER community (pictured above) gathered at City Hall council chambers to voice their concerns and support the introduction of living wage legislation on Thursday, Sept. 27. The measure, if approved, will raise the minimum wage for city contract and subcontract workers under the Philadelphia 21st century minimum wage and benefits standard.

“This just shows you what happens when people do work together,” Councilman Mark Squilla said. “We appreciate everyone’s support and again, thanking POWER for their diligence in making this come forward.”

The proposed legislation would raise the minimum wage incrementally, beginning with $13.25 in 2019 and increasing by 50 cents per year for the next two years. Between 2021 and 2022, the increase will shift to 75 cents, ultimately reaching a $15 per hour cap by 2022.

For a year and a half, Squilla has been an ally of POWER, securing co-sponsors to introduce and approve the legislation. After settling other parts of the meeting agenda and council business, Squilla introduced the legislation and over 20 members of POWER celebrated by cheering and waving “Lead by Example” signs. After celebration concluded, a town hall forum commenced.

POWER, which stands for Philadelphians Organized to Witness Empower and Rebuild, is an interfaith organization composed of over 50 congregations in southeastern and central Pennsylvania. According to the group, the minimum wage for contract and subcontract workers in the city of Philadelphia has oppressed citizens, particularly those of color.

About 6 percent of Philadelphia’s working population is Hispanic or Latino, while nearly half is African-American. For over three-and-a-half years, POWER and its economic dignity campaign team have mobilized to seek an increase to the current $12.20 per hour wage for state employees which include contract, subcontract, and city workers. Within the state of Pennsylvania, the federally mandated minimum wage is lower, $7.25 per hour.

In 2014 POWER canvassed the community of Philadelphia and received feedback on what it means to work in the city. Terri Burgin, co-chair of the economic dignity campaign team, shared her thoughts about low-paying jobs.

“It’s immoral and wrong and just not something as a city we can take,” Burgin said.

A Pew Research Study found that nearly 13 percent of the city’s population lived in poverty in 2016. This is one reason why its economic dignity campaign team has been involved with previous legislative efforts regarding wages in Philadelphia. In 2015, POWER worked with Philadelphia City Council to secure a $12.00/hr minimum wage for all subcontracted city government projects. In 2016, the organization did the same to ensure that all publicly funded projects pay workers a living wage.

Many of POWER’s supporters come from different organizations across the city. John Marshall, secretary of the Philadelphia Ethical Society, said POWER’s role in this initiative has come from bringing groups together to fight injustice.

“A lot of religious congregations exert a lot of pressure on the city for social justice,” Marshall said. “[The living wage introduction] is an example of that. The things is, a lot of people have to have two or three jobs to [sustain themselves],” said Marshall. “But really, one job should be enough.”

Beulah Osueke, the communications director of POWER, discussed some of the effects of low wages on Philadelphians.

“We live in communities where people are struggling to make ends meet,” she said. “How are [parents] going to make sure their children are fed before school? Why are adults who are working a full day choosing between rent and dinner?”

Frances Upshaw, (pictured below), who sits on the board of directors for POWER, said this living wage introduction has been years in the making, but hopes that the process will warrant a positive result. 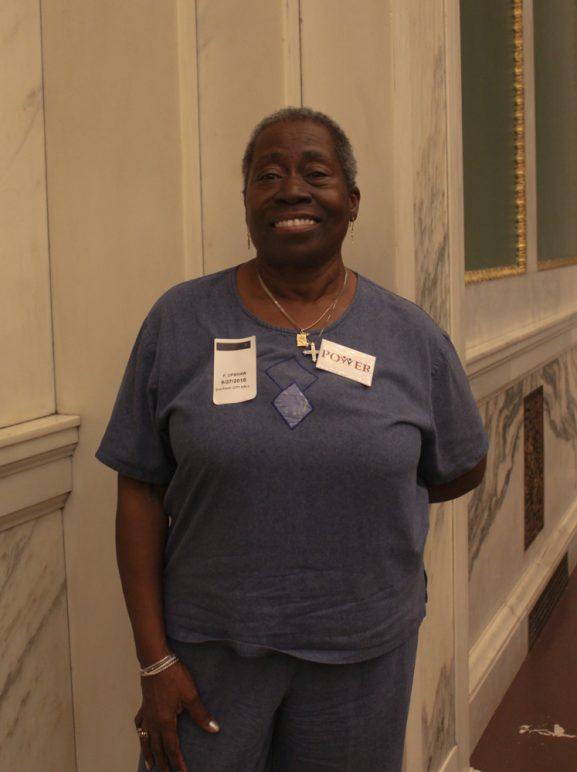 “We have been one of the driving forces,” Upshaw said. “If somebody doesn’t say something, then nothing happens. And so that’s the position we have put ourselves in, trying to make this city work for everybody.”

POWER is also using the legislation introduction as a moment to reflect on their hard work. The next step moving forward is for City Council to vote on approving the legislation, though the vote has not yet been scheduled. 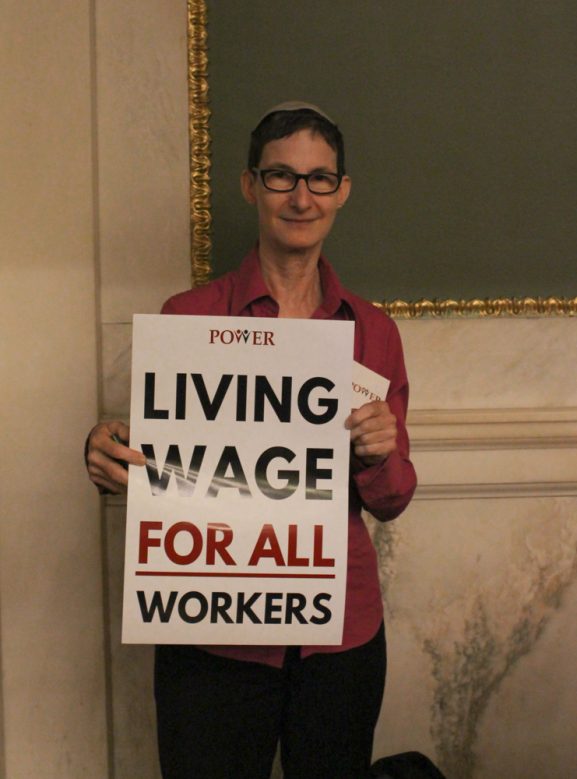 Rabbi Julie Greenberg, (pictured above), who coordinates the climate justice work for POWER, said that it was a big day for celebration.

“It’s inspiring to see how people power can make a difference,” she said. “A lot of times, people power has to go up against corporate greed and the profit motive, but in a democracy, the needs of the people should prevail.”

Text and images and by Simone Stancil, Pariss Briggs and Jenny Stein.

Jon Lyons was not always a runner. In fact, after running track in middle school, he hated the sport for much of his life. He invested time in music, even touring with a rock band. Then his life [Read More]

Golf’s popularity has taken a hit in recent years. Courses around the world have been forced to try and find ways to bring people back and increase sales. Enter foot golf, a blend of soccer [Read More]

And Still I Rise, a youth development program for children ages 8 to 18, opened in May. It received its name from a poem written by the late Maya Angelou. “You may trod me in [Read More]