HACE, a neighborhood advisory committee, is a community development corporation focused on affordable housing, economic development and social services in the Latino community.

Neighbors gathered at HACE’s Business & Visitor Center on North Fifth Street near West Lehigh Avenue, along with community liaisons from the Bicycle Coalition and the City of Philadelphia’s Vision Zero project, which partner to reduce the number of traffic collisions and traffic-related injuries and fatalities across the city.

Kelley Yemen (above), director of the city’s Complete Streets project, spoke to Fairhill residents at the meeting about Mayor Jim Kenney’s task force to reduce traffic deaths to zero by 2030 by collaborating with community organizations.

According to National Highway Traffic Safety Administration data, Philadelphia has a per capita rate of about six traffic deaths per 100,000 residents, which is higher than most major American cities.

The Wednesday night session focused on the large number of traffic-related injuries and deaths in Fairhill. Vision Zero identifies the neighborhood as part of its High Injury Network, meaning its roads have some of the city’s highest rates of deaths and severe injuries per mile.

After a presentation, residents participated in small roundtable discussions about their experiences with street safety and solutions they believed could reduce the number of traffic incidents.

A majority of residents in attendance were concerned about safety on streets where local schools are located. Fairhill Community High School is at North Fourth and Cambria streets, and the Pan American Academy Charter School is one block east.

Miguel Torres, 52, grew up near Fourth and Cambria streets and his mother still lives in the area. He thinks the city and HACE should communicate more with school administrators to educate students and parents about traffic safety.

“If we communicate that to the principal, the principal gets that message out in Spanish, English, Vietnamese, whatever language, get it out to them so they can comply,” Torres said. “This way you can avoid road rage, a kid getting run over, which is most important.”

The most vulnerable to fatal traffic incidents, community members agreed, are children. Oftentimes, they said, young kids are hit by speeding or careless drivers because children play in the street and could be addressed with more safe playgrounds or parks in the neighborhood.

Leon Sanford, a volunteer for Asociación Puertorriqueños en Marcha (APM), and Derry both said they were hit by cars as children. Sanford said his accident, which happened at age 7, still impacts his decisions as a pedestrian. 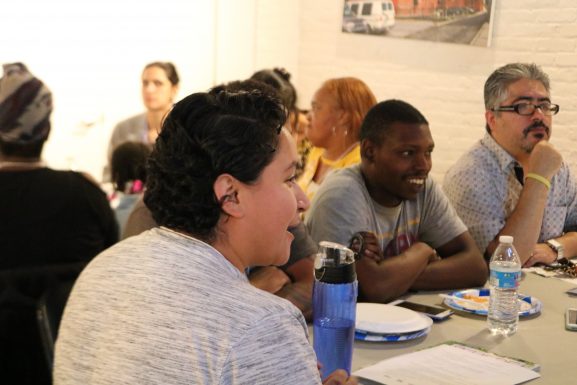 APM volunteer Iliana Dominguez-Franco, Sanford and Torres (above) complained that aggressive driving is common in the neighborhood. According to Vision Zero, about 53 percent of traffic-related deaths in Philadelphia are due to aggressive driving, which include speeding and failing to yield.

However, Charlotte Castle, the Vision Zero neighborhood programs coordinator for the Office of Transportation and Infrastructure Systems, said the city cannot install any type of traffic camera unless legislation is passed.

“There’s an opportunity as residents and as voters to contact your elected officials, letting them know at the state level, it’s really important to you as neighbors living in Philadelphia that …[the] city has access to using speed cameras against excessive speed,” she said. 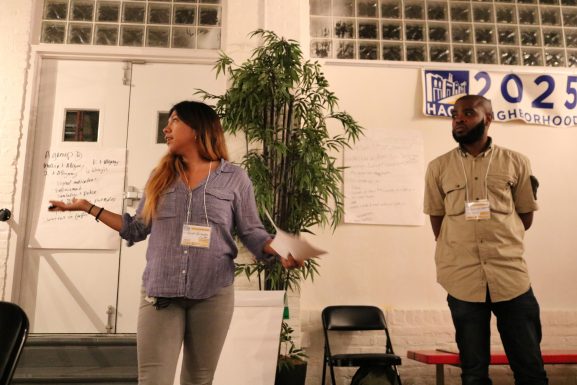 The meeting was led in part by the Mantua Civic Association President Dewayne Drummond and the Bicycle Coalition Community Engagement Liaison Brenda Hernandez (above). The coalition, an advocacy group that promotes bicycle riding and foot travel through the city, focuses its street safety education on communities in need.

Hernandez, who grew up in Mexico City, used to be a volunteer for Juntos, a Philadelphia Latinx immigrant community organization. She is personally invested in improving transportation in communities with undocumented immigrants and minority groups because there is underreporting of traffic collisions, by both residents and police.

“Philadelphia is a really diverse community,” Hernandez said. “When [residents] talk about fear of harassment, also they always talk about police officers not doing their job. The communities know what happens when they report a car crash.”

For those vulnerable populations in the city, it is a complex issue.

“When we talk to communities, transportation issues are not their main thing,” Hernandez added. “But if you actually connect them to, how do you go from one place to another? Qhat keeps you from going to your work? What keep you from going to church or going to other places that you need to? That’s how you start plugging in transportation.”

-Text and images by Greta Anderson and Brianna Baker.

El Centro de Oro, the golden center, fosters Latino dance, music and culture in Fairhill, while also bringing light to an abundance of resources available in the community. This has been showcased since 1979 at [continue reading…]

Immigration: The History Of ICE And The Controversy

The United States Immigration and Customs Enforcement, also known as ICE, has recently found itself at the center of national discussions surrounding immigration policy. Locally, Philadelphia’s ICE Field Office, which is the most aggressive in [continue reading…]