Outside of Fairmount Park, one might be surprised to hear there is a six-acre plot of land in East Falls that remains completely natural and undeveloped. But within the neighborhood, there is a great deal of disagreement over whether or not it should stay that way.

McMichael Park, bracketed by Henry and Midvale avenues on two sides and McMichael and West Coulter streets on the other two, has long existed as an open green space enjoyed by joggers, dog walkers, families and community groups. In May 2017, the City of Philadelphia and its Parks and Recreation department approved a proposal to build a playground in the park.

But while a vote at an East Falls Community Council meeting demonstrated the majority of residents are in favor of a playground, there has been conflict regarding whether anything should be built at all, citing reasons from safety to historical preservation and maintenance. Friends of McMichael Park, a community organization dedicated to maintaining the park as-is, makes up a large part of this group, as they are the park’s primary caregivers.

“The few people who originally thought [the playspace] was a great idea were not really involved with McMichael Park and still are not involved with the current maintenance plan,” said Alexis Franklin, the coordinator and a founding member of the Friends of McMichael Park. “If they can’t help with the park the way it is, why would you add more development to it which would require more investment? Who’s going to do that is the question.”

Supporters of the playground say a playspace would bring more families to the neighborhood and solidify the park as a community center.

“I think carving out less than five percent of its space for an area for children will bring more families there, and I think by then it will help also socialize more people to volunteer to help take care of the park,” said Anne Tiribassi, who has two children and lives on the perimeter of the park at McMichael Street and Midvale Avenue.

Tiribassi is also the co-chair on the McMichael Park Playspace Committee, a grassroots organization supporting and fundraising for the playground which was started by members of the community and uses the East Falls Community Council as their fiduciary agent.

Some community members say the playground’s critics’ motivations seem elitist and exclusionary. Members of Save McMichael Park, which has sprung up to oppose the playground, remain anonymous. The group does not publish members’ names or any meeting details but, according to Tiribassi, is comprised of a small group of individuals, many of which are also in the Friends of McMichael Park and mostly live on the perimeter of the park. Franklin confirmed this but said she is not a part of the coalition.

For the last 30 years, The Friends of McMichael Park has cleaned, maintained and scheduled programming for the park, volunteering their time and effort to ensure the park is kept clean and safe.

“Safety is always our first priority because we are concerned about drug use and loitering,” Franklin said. “When our group started out there was a murder in McMichael Park, so that’s what really spurred us onto maintain it. Because if we keep it nice then people will use it, and a lot of nice people will use it, and that’s what we’re encouraging.”

The Friends of McMichael Park are unanimously opposed to the playground. Their efforts have included protests in the park, an internal vote against the playground and having a presence and participating in discussions at East Falls community council meetings. In a 2016 letter to the editor of East Falls Local, Franklin said that while the group is in favor of children playing in the park, they do not believe playground equipment is necessary and that other neighborhood playgrounds are underutilized.

“The Friends of McMichael Park voted when this issue initially came up to keep the open green space as well because that was the original design,” Franklin said. “We had a unanimous vote to keep it that way because we are the main caregivers, fundraisers and program planners and everything else.” 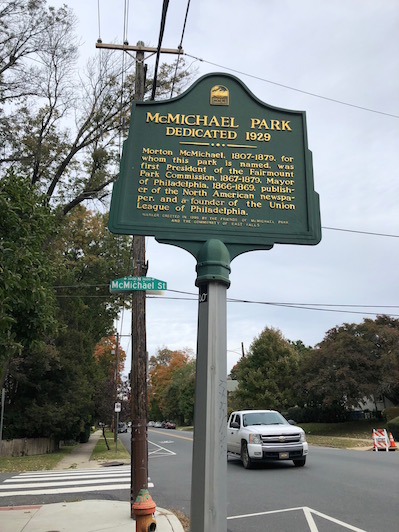 Franklin said another interest of Save McMichael Park is historical preservation and designating the park as a historic site. She explained how Marquis de Lafayette and General Washington came up the Schuylkill in 1777 and camped on the land that is now McMichael Park on their way to the Battle of Germantown. She said the The Lafayette Society and the Daughters of the American Revolution have all shown support for the group, among other historical groups.

However, most of the playground’s critics have been silent lately. The playground has been approved by community and city councils, as well as the Department of Parks and Recreation. Though the playspace is now in a design and fundraising phase, most parties involved are still taking the concerns of the critics into consideration.

When it came time to design the playspace itself, landscape architect Sara Schuh of Salt Design Studio, who was hired to design it, tried to compromise between both sides of the controversy.

“So these folks who want nothing to happen, they care about this pastoral, woodland quality of the park,” Schuh said. “And these people who feel like there’s nothing exciting for their kids, they want something really exciting. We wanted to find the piece that might begin to link both of them, which to me was nature play.”

“Nature play” describes a playspace that enhances the natural features of the land instead of building something completely artificial on top of it. Schuh said the playspace will maintain the pastoral, natural feeling of the park using simple, sustainable materials such as wooden logs. This design would also help to foster the native ecology of the park, managing stormwater and increasing biodiversity.

“These are all things that would enhance your enjoyment of this woodland, and would make it an ecologically healthier place to be,” Schuh said. “And by doing some of those things, we could also make it much more interesting for kids.”

While the design and funds are the main obstacles in materializing the playspace, Schuh has not forgotten the community’s concerns.

“This design is a compromise,” she said. “It’s an attempt to create something that is going to be loved by everybody.”

Franklin said she and the Friends of McMichael Park feel the park is already a thriving community space since it is already used for so many community activities such as an early morning boot camp, a play group for children, a flea market in the spring and free theater in July makes it a hub and a playspace without needing any physical structures.

Yet the playspace committee feels the park can maintain its role in the community, and that adding a playground would bolster it without interfering with any of the activities that currently take place there.

“We think that the playspace will just be the beginning of making McMichael Park a community town center, and it will really help get families interested in taking care of the park,” Tiribassi said. “You need people to use the park to want to take care of the park.”

Franklin worries that interest in maintaining the park is exactly what the playspace initiative is missing.

“If they’re not doing it now. they won’t do it later,” she said. “So I think people get what they give. We’ve been giving for a very long time and are happy to do so.”

While the park has been approved by all necessary entities, the design is being negotiated and funding is not yet secure. The ballot question in the November 2018 election approved the budget that would allow for the funding to be allocated to the park, but it has yet to be allocated.

In the meantime, the Playspace for McMichael Park group is fundraising to augment the current design idea with things like lighting and accessible walkways. The East Falls Community Council is acting as a fiscal agent for the project, as a registered 501(c) (3) organization, which was needed to hold any funds. 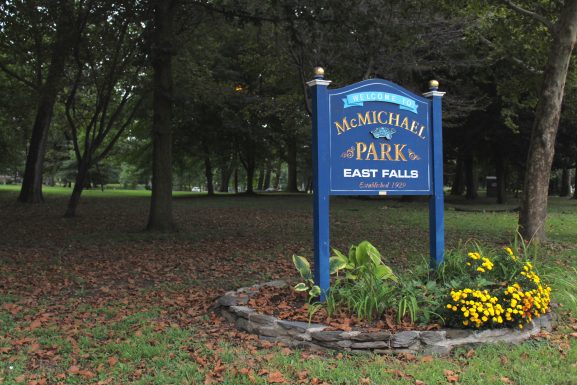 This sparked some additional controversy, according to East Falls Community Council president Bill Epstein, as many of the Friends of McMichael Park were concerned about the fiscal agent relationship.

“The Friends of McMichael Park wanted to know why that hadn’t come to a vote,” Epstein said. “I don’t know whether those previous decisions had ever been put to a vote, but I was glad to put it to a vote. And it was approved.”

The community council also eventually voted to go on record supporting the playspace.

As with many development conflicts in East Falls, criticisms and complaints don’t go away even after all the construction permits are in. Designs are almost in place and fundraising is full swing, but the gadflys still gather.

“Somebody put up a post in the park months ago as a joke, with signs pointing to all the different playgrounds that are close by: Penn Charter, Mifflin, Inn Yard Park and so on,” Epstein said. “I took that as a gesture from the Save McMichael Park folks and the Friends of McMichael Park that they were still not happy. But we get along more than we don’t get along with them.”

https://vimeo.com/69619550] Mount Airy always seemed homely and quaint to Iman Marcano-Sowell. That’s why when she decided it was time to find a home for Calypso – the Trinidadian restaurant she runs with her mother, Claudette [continue reading…]

Most days, Walt Maguire works with Web content at Fox Chase Cancer Center. This weekend, he slipped into a silver cloak and became Albus Dumbledore, also known as the long-bearded professor from the Harry Potter [continue reading…]