This summer, the North Fifth Street Revitalization Project is working to develop and encourage numerous cultural heritages of residents in Olney through free local programming.

“Our diversity is our greatest asset,” said Stephanie Michel, assistant director of the organization. “We celebrate that and introduce neighbors to various cultural activities. We offer the activities for free because Olney is low-moderate income neighborhood and the residents here should be able to experience fun exciting events without having to stretch their budget.”

In early June, Jazz in Fisher Park brought residents together outdoors to enjoy music and share information, and Passport PHL encouraged foodies to step out of their comfort zones and try some of the diverse cultural cuisine along the Fifth Street business corridor.

Though the summer allows flexibility for new creative programming, the Revitalization Project helps to facilitate other regular events that have become staples of the neighborhood and an excuse to celebrate diversity.

Every second Friday of the month, the Olney Open Mic Night takes the stage at St. Paul’s Evangelical Lutheran Church. For the first time this July, local jazz group NewERA joined the event as a house band for performers. 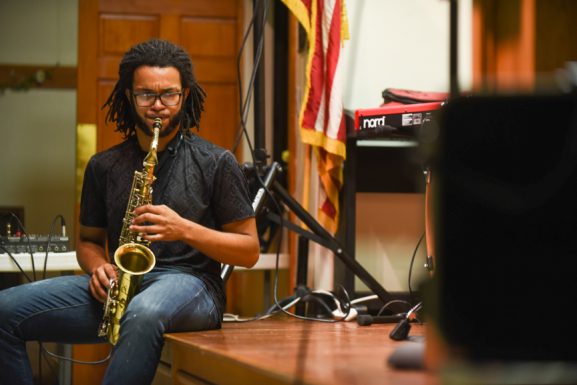 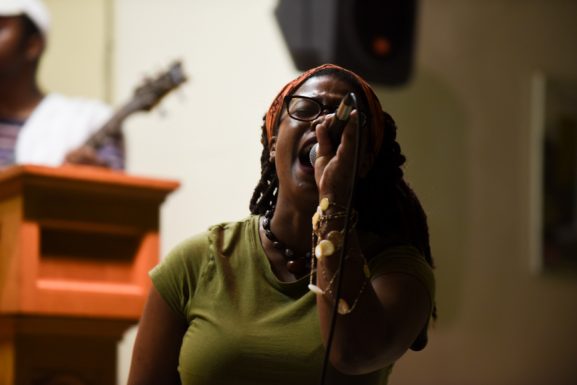 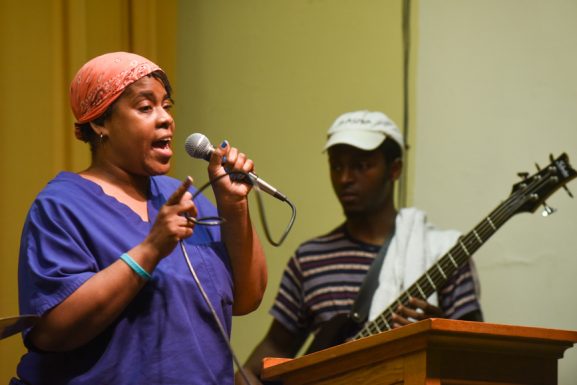 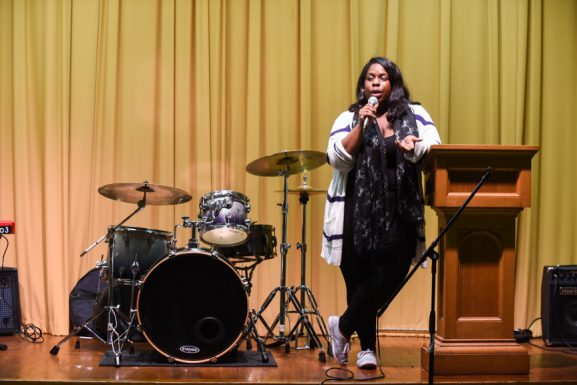 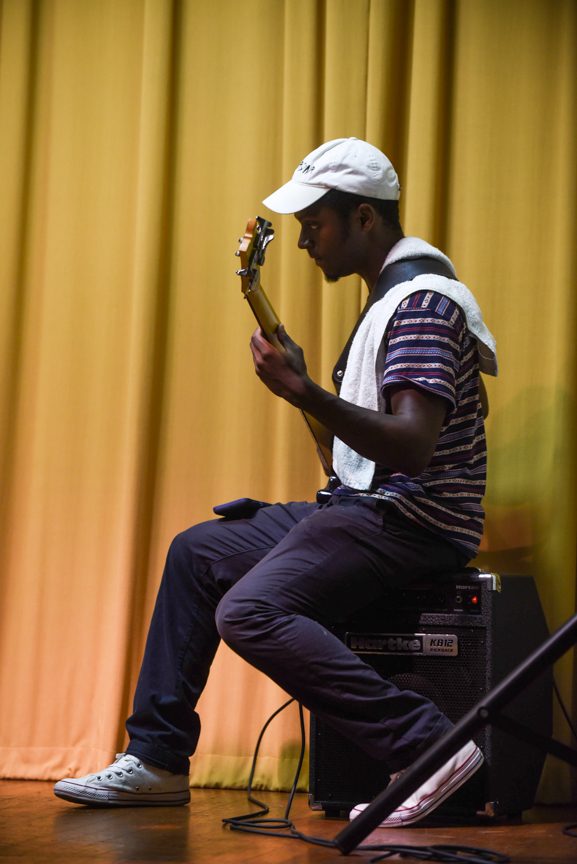 “Open Mic Night provides a consistent space where people locally know they can come out, meet new neighbors, try local food and have a good experience,” Michel said. “People don’t have to worry about venturing into the city or another neighborhood to get a good family friendly artistic event. They can walk over or take a quick bus ride and be in good company.”

From drum solos to dramatic readings and all artistic ventures in between are welcome. The event, which has taken place in the neighborhood for the past six years, draws a dynamic group of talent and an engaged audience that spans generations.

“Enjoying art as a collective in any space is powerful,” said Maya Simone, a 20-year-old singer songwriter who performed a few originals with NewERA on July 14. “Jazz in particular, I find that it’s impactful to have the folks that have ‘been there, done that’ in the same room with the folks that are trying to do it. You learn more than you think. I feel that their guidance, encouragement and talent molds all of us as artists.”

Small donations were encouraged to help fund refreshments for the next month’s event, where the Revitalization Project takes another opportunity to explore diversity. Philadelphia’s Fifth Street is home to many cultural restaurants, with a taste of Korean cuisine, soul food, classic barbecue and more. At the July event, catering was provided by Gail’s Caribbean & American Cuisine and the jerk chicken was a hit.

Bop and cha-cha classes are offered for free at the Greater Olney Library branch every Monday night in July and August.

Teaching artist Melissa Talley-Palmer, supported by a 2015 Leeway Foundation Art and Change Grant, has been teaching the social dance at the library every summer for the past three years. The Let’s Dance project, which explores the preservation of history and culture of dance in African American communities, has recently expanded to libraries in the Haddington and Cobbs Creek neighborhoods also.

“Over time, communities have lived together, worked together, shared social experiences together,” Talley-Palmer said. She remembers learning the bop and cha-cha from her grandparents, where the whole family would join in, and wanted to re-introduce the tradition.

“We adapt in our cultures and create intergenerational experiences,” she said. “If we don’t share, then we forget.”

The first week of scheduled programming was rained out, the second week had a small showing. She and Michel shared a laugh, remembering an immense showing at one class last year where the crowd in the small classroom at the library was so packed there was hardly enough room to dance.

“We’ve decided to offer this class to the community because of the response we received,” Michel said. “Last year the program fared extremely well, the community room at the library was packed and filled with people who wanted to learn.” 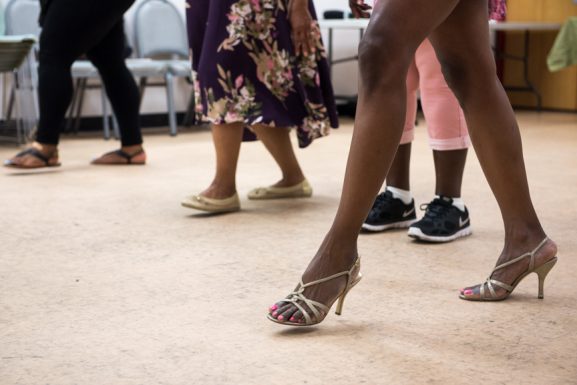 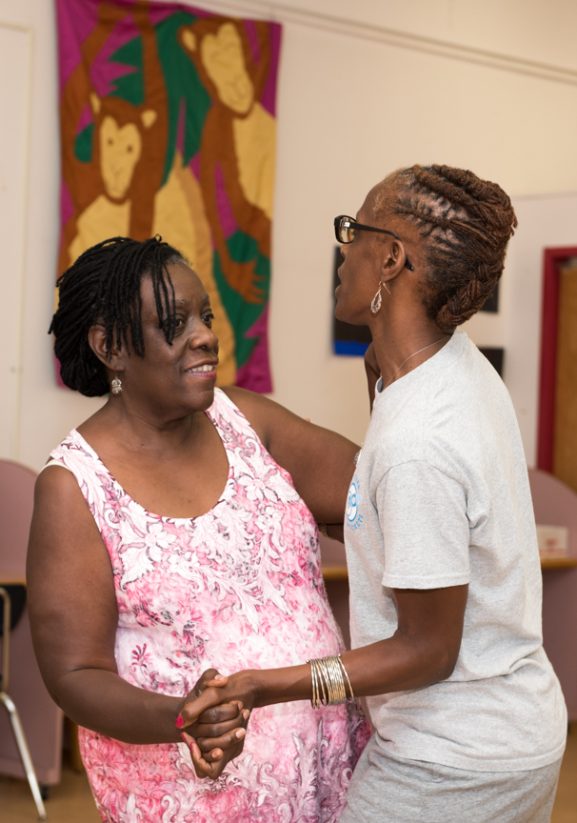 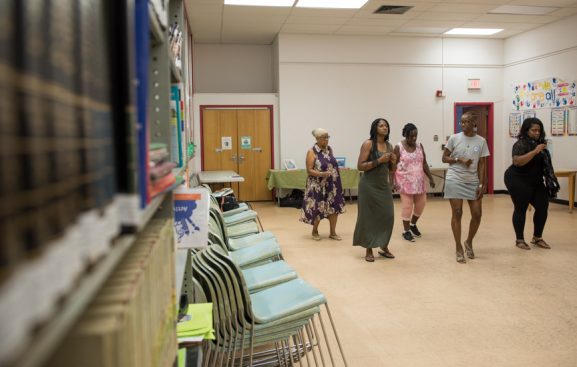 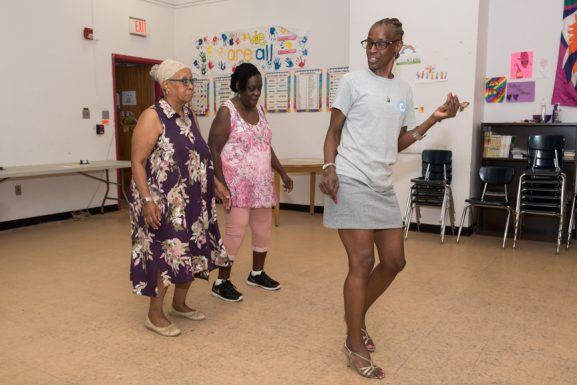 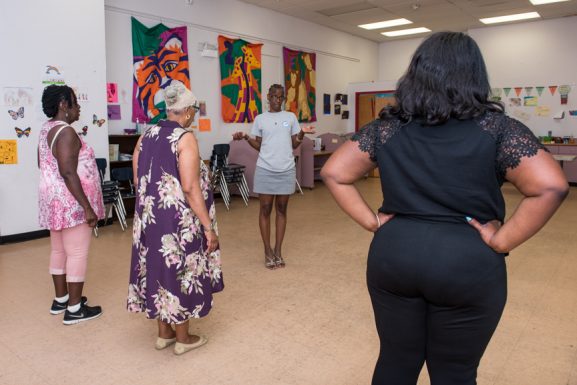 While the cha-cha is a staple of social dance rooted in Latin American culture, the bop holds a particular significance in the Philadelphia African-American community. The six-count social dance took the national stage on American Bandstand, hosted by Dick Clark in West Philadelphia. It is a smoother adaptation of the 1920s era Lindy Hop and Jitterbug dances that came out of the South, adapted with a Philadelphia style in the 1950s.

Talley-Palmer said that almost no two people bop the same way, and different Philadelphia neighborhoods adopted different styles. In North Philadelphia, where she grew up, Talley-Palmer noted the bop has a cool vibe with intricate kicks and steps. South Philly boppers play it smooth with a slower style, holding on the downbeat. West Philly boppers, she said, came up with their own combo of the two.

“The only thing that ever changes is tempo and direction,” Talley-Palmer said. “When you’re from the community, you can actually identify what community a bopper is from. And we’re competitive. We challenge one another on who can do the suavest, the fastest, the slickest.”

Betty Johnson, 68 of East Oak Lane, said she enjoys making the trip to Olney to participate in the free dance classes. She remembers doing the dance with her parents and grandparents more than 40 years ago. Their evening tradition, which has been replaced in this generation by watching TV and devices, was to gather around and dance after dinner.

“It’s so nice when you see a bunch of people out bopping the right way,” Johnson said. Not only did she mention that’s not a common sight anymore, but that she only just learned the proper steps and rhythm at the July 17 event.

“I had my own step, but I guess I have always done it wrong,” Johnson said with a laugh. “This is what our parents used to do all the time, through bop, cha-cha and other dances. It’s extremely important to keep it alive.”

Many times throughout the class, participants shared memories of dancing with their families in the 1950s and later.

“They’ll laugh and enjoy the good memories,” Michel said. “It’s in those moments that you see how deeply this dance is tied to the African American culture.”

-Text and images by Brianna Spause.

Amanda Bowman always imagined herself as a mother. When the time came for her to have children, she was presented with two surprises. The first: she would have to raise them as a single parent. […]

Tyrone Akins and Brian Holland knew that they didn’t want to be in the pharmaceutical business forever. At the same time, they knew that if they opened a business that it had to be unique […]