Computer access can be taken for granted by Blackberry-wielding e-mailers, but for many people, getting to a computer is not so effortless. Libraries, community and recreation centers play a primary function,

giving residents in urban neighborhoods access the Internet as well as many other services.

In Brewerytown, residents have been able to utilize the resources and collective knowledge found within the Brewerytown Community Development Corp. President James Carter plays an integral role in keeping the center up and running since it opened its doors in September 2007.

“When developments go up, price goes up and we don’t want people to leave the neighborhood,” said Carter. “I have grandchildren who need to have a future in their own neighborhoods. We shouldn’t try to get good jobs and make money to move out of the neighborhood. We need doctors and judges in the neighborhood and have our own pool to pull from.”

In trying to empower his neighbors, Carter and the community center offer a computer lab that is open from 9 a.m. to  6 p.m. for those in the neighborhood who don’t have the luxury of at-home computer access.

There are 22 computers, but there are always a five or six that are in need of repair, said Delores Biggs, the neighborhood activities coordinator.

The students usually use the computers for homework and many adults use the lab for job searches.

“Our computer lab is experiencing a boom in adults using the computers,” said Biggs.

But the lab can only accommodate so many and there are many Philadelphia residents still in need of Internet access.

Over the summer, the city appointed a chief technology officer to help coordinate efforts on the digital inclusion front. Allan Frank, founder and former president of the AKA GROUP, an IT consulting firm, holds this cabinet-level position.

The city is looking for a “sustainable, long-term strategy on digital inclusion,” said Frank.

As part of a $35 million request for federal broadband stimulus grants the City of Philadelphia is looking to expand access to the Internet for residents in these underserved neighborhoods through the Digital Philadelphia Broadband Initiative.

As part of the Obama Administration’s initiative to spur American innovation, the Commerce Department has made $100 billion available through the American Recovery and Reinvestment Act, or ARRA.

At the United States Conference of Mayors, in June of this year, the plan was rolled out. Cities would have the opportunity to apply for grants through this broadband plan.

Frank explained the plan. Money will be allotted to cities on the basis of three proposals- adoption, computer labs and infrastructure. The adoption portion will be used to build the portal and is anchored by the Public Library of Philadelphia.

The computer lab proposal was submitted through the Philadelphia Housing Authority and will be to set up and expand computer labs in and around housing projects. 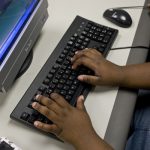 The third proposal is laying the fiber. The broadband network will be “a dual use network for municipal services and public safety,” said Frank. It will be used to “light up those community centers, rec-centers and libraries,” as well as the public safety used by police and fire.

In the first phase of requests, the city has asked for $14 million for adoption, $2.5 million for computer labs and $22 million for infrastructure, said Frank.

The City of Philadelphia put in their first of three rounds of requests in September. The next two deadlines are spread through the next year, ending next September. Frank is hopeful but sees some issues within the federal plan.

The definition of unserved or underserved becomes an issue when there are services accessible in the city. Because there’s Comcast, he said, it’s not underserved, but it is unaffordable.

Frank would like to see changes in the definition to include an income test, where when a percentage of the population is below the poverty line, the area should be defined as under-served.

“We got data from Knight Foundation from the census track to find out the under-served,” said Frank. “Where computer use is under 30percent. One third of the city meets that criteria.”

Frank wants to concentrate on North and West Philadelphia. “It’s kind of a no brainer,” he said.

But if Philadelphia does not meet the required criteria, Frank has other plans.

“Even if we didn’t get a dollar,” he said, “we saw this to be a game reset on the wireless Philadelphia. I use this as a forcing function…to drive access to the edges of what we can control.”

If federal funds prove to be out of reach, Frank plans to look into block grants and other forms of alternative funding.

“This is really about trying to help the community,” he said.  “For the first time, there’s someone in city government trying to get everyone together to do the right thing.”

Its programs and grant opportunities like these that keep the Brewerytown Community Development Corp. afloat. Sometimes, there just has to be a little conversation to let the right organization know about the programs available to them, said Frank.

“I’ll be checking that out tomorrow,” said Carter.

In November the Greater Brewerytown Community Development Corp. (GBCDC) reopened its technology center for the public, but employees at the community center said it still feels like an underused resource. “I think people are a […]

https://vimeo.com/30751307] Brewerytown and Fairmount Community Development Corporations have been working together to restore the greater business bureau in Brewerytown. The shared goal is to institute the phrase, “two neighborhoods and one community.” The Brewerytown Neighborhood […]