Ryan Draving’s goal is to seek out leaders in West Philadelphia and bring them together.

He was part of a group which helped more than two dozen organizations in West Philly put on the West Philadelphia Community Action Fair last April.

Draving, a senior partner at Manayunk-based consultancy Muhlenhaupt + Company, LLC, grew up in Jenkintown and went to Dickinson College in central Pennsylvania before moving to Philadelphia a decade ago. After living in various parts of the city, he settled into a house on Baring Street, in the Powelton Village neighborhood, where he has lived for the past two years.

As someone who has been interested in social activism from an early age, Draving has embraced the community-oriented nature of Mantua and West Philadelphia in general. He said the ability to get involved with his neighborhood and surrounding community is different from other places he has lived.

Tell us a little bit about the event you helped to organize last April.

What were some of the challenges that you encountered during this whole process?

The first [event] was put on by Paul Dexter and he did almost the whole thing himself. We had a couple of friends who jumped in and helped him out. This time, our challenge was to do this as a group and bring out a larger group of organizations to be there … some more diversity beyond where Paul’s immediate circles were able to reach. Our goal with this last [event] was to turn it into something that’s not dependent on one person. 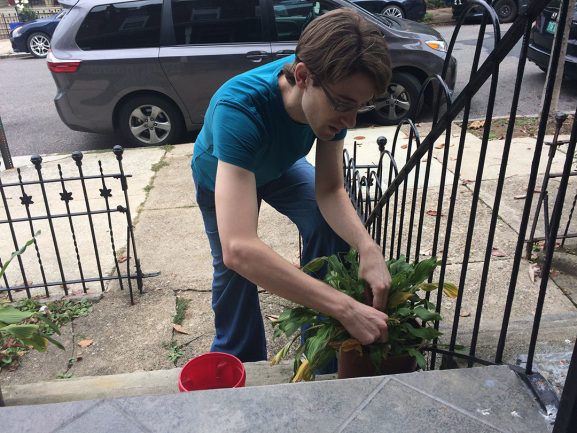 What were some of the things that you learned?

One of our biggest challenges was to bring in some additional diversity of perspective. I’m really not the ideal person to be organizing in West Philadelphia; I wasn’t born here, my family doesn’t go back here. There are so many people who are organizing specific groups, there’s just not a group yet that’s bringing it all together. One of our big learning lessons has been that we need to bring the groups themselves and the leaders of those groups to the table to direct this, instead of directing it ourselves. That’s a challenge in itself, right? That’s what takes some energy and time and we also don’t want to sap energy from these group leaders who are already doing great work in the community. What we found is that a blend of people who maybe have a foot in both, that work in those groups, but are not necessarily the sole person running it is a great way to start bringing in some of that insight, but it’s a challenge. 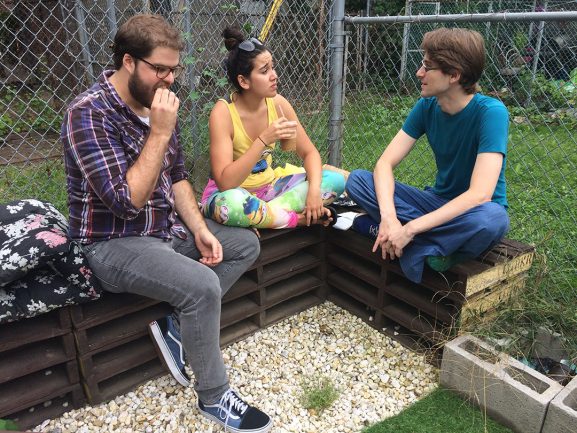 What got you into getting involved in your community in the first place?

I guess I got started with activism in general on more of a global scale. I was thinking I really want to change the world as a whole and I think that’s often,  more often than not, sort of a naive view of things. It certainly was in my case, that I’m going to step in, and because I realized that there’s a problem, I’m going to fix it all. Over time I’ve gotten more and more local in the sense that as much as I want to change politics and change governmental structures and really the way we organize as a society to be more collaborative and communal, I’m starting in my house: we’re doing a communal living situation.

Because I’m now part of West Philly, I have the chance to really experience more of what it’s really like, to talk with people around here and to get involved with groups in a way that’s harder to do on a global level. There’s that interesting tension I feel … in some ways I’m not the person who should be at the head, I should be supporting, so I’ve been thinking about that and we’ve been talking about that as a group, how maybe we can get more behind the front lines and supporting the people who are leading instead of trying to lead our own direction. 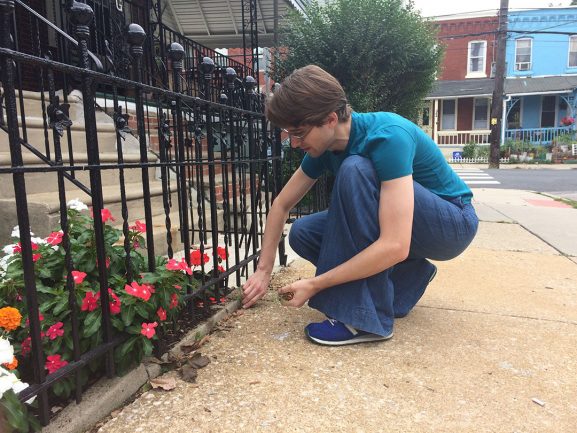 What would you say are some defining characteristics of West Philly?

It’s a fun question. I describe Philadelphia as like Old City is sort of like the bars and art and out at night. South Philly is all these different ethnic and sort of niche neighborhoods and sort of the working, real in the tile manufacturing, that kind of stuff. You’ve got Fishtown that’s sort of creating this super hip new area. And then West Philly, to me the reason I choose to live here is because it’s very community-oriented. I know my neighbors on this block. I really love them. I really enjoy getting to be a part of this. There’s a different pace of life I think that happens here. It starts to shift a little bit around 40th, which I think would have been great for like my college years. It’s a much younger, university, student crowd. Out here past 40th Street and various parts, there’s more greenery. There’s a slower pace of life. There are block captains that are really just part of people looking out for each other instead of just one person trying to run the show and everyone looking out for just their own little property.

-Text and images by Lian Parsons and Owen McCue.

[vimeo 51598019] Debris has been flying at the Mt. Vernon Manor Apartments, located around 33rd and Wallace streets, since construction began on this much-anticipated revitalization project over a month ago. Most residents have been relocated and [continue reading…]

Even though Bob and Mary Matcovich were expecting to welcome their third child in 1994, their son Christian’s birth still managed to be a shock – because it came three months early. Premature is considered [continue reading…]