The Gayborhood stretches from 11th and Broad streets to Chestnut and Pine streets in Center City Philadelphia. Each block within the area has a gay destination that caters to the LGBTQIA communities.

In 2007, the local government agreed to add 36 gay pride flags and street signs in recognition of the communities. Due to the large concentration of gay businesses on 12th Street, it has become the focal point of the neighborhood.

While roaming the streets of the Gayborhood, you may notice the lively culture. People are always coming and going, stopping to chat and heading to work. Like in the rest of the city, time speeds by quickly. The Gayborhood has an answer to this in the form of a place where people can slow down and relax and enjoy the surroundings. This answer is Café Twelve. 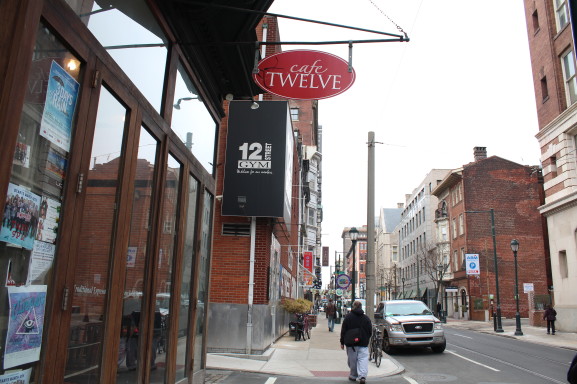 Café Twelve is nestled right into the heart of the Gayborhood. Located at 212 S. 12th Street, between St. James and Manning streets, the café sits at the center of a very active section of the Gayborhood, the very section that hosts Outfest every year.

“It’s a nice place to meet people that isn’t oriented around alcohol or dancing,” said Yilma Zsingh, who frequents the café because it’s a convenient location for him and a place to watch people and absorb the city.

Formerly known as Millennium Coffee, the café regularly hosts a diverse crowd of customers both young and old. The café is lined with large windows in the front for patrons to sit near and look out into the neighborhood. In warmer weather conditions there’s even seating available outside, making the cafe an even more appealing place for residents who wish to ‘people-watch.’

The café welcomes all, residents and strangers alike. They serve organic and fair-trade coffee, straight from the foothills of the Himalayan Mountain range. 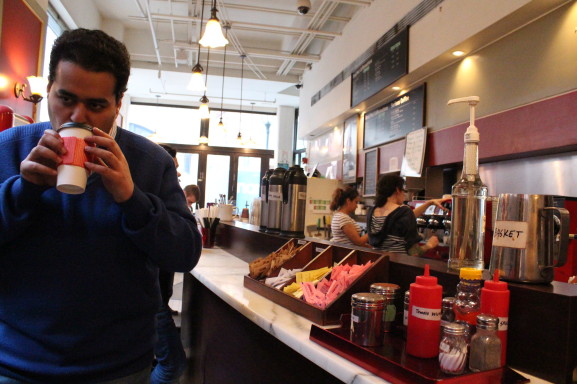 The view from the café gives you a glimpse of life in the Gayborhood and the vast array of places that people frequent. The Gayborhood is a tight-knit community where many of the local businesses play a major role in cultivating the culture and atmosphere of the neighborhood. Being in the center of this cultural hub, the café is a place to go to see what’s popular with the local residents and visitors.

One of these places is the 12th Street Gym located on 12th Street and St. James Street. It sits across from Café Twelve, on the other corner of St. James Street. From the café windows you can see the people entering and exiting the gym. Some are residents from the Gayborhood, others are clients who travel a little further to enjoy the gym’s cheap rates and friendly environment.

“It’s always full,” said gym member Richard Hagar, who also frequents the café. “I go to the gym and then I come right here.” 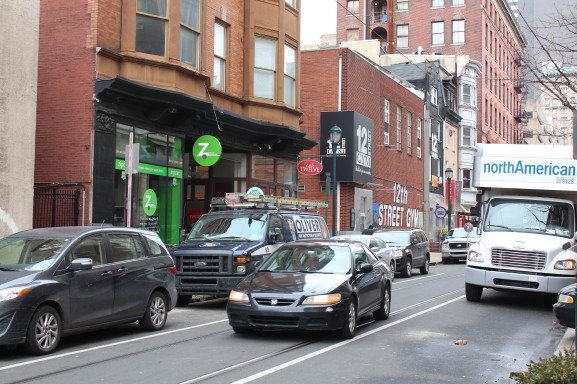 In business for more than 26 years, the 12th Street Gym boasts a welcoming atmosphere open to all. With its wide variety of fitness classes and multiple rooms of equipment, the 12th Street Gym isn’t only a gym to the community, but a place to meet new people, workout with old friends and strengthen the sense of overall community in the Gayborhood.

Next door to the 12th Street Gym at 200 S. 12th Street is Tabu Louge and Sportsbar. Tabu welcomes all to the sportsbar, from Gayborhood residents to curious bypassers. The bar’s mission is to cater to the diverse and dynamic always-changing population that makes up the Gayborhood community. While people can grab a drink and catch up at Café Twelve during the day, at night Tabu Lounge and Sportsbar is the spot to catch up with the locals and meet some new people.

Tabu makes an effort to support the community and give back to the Gayborhood by supporting organizations like the Mazzoni Health Center, William Way Community Center, Philadelphia Gay Black Pride and Equality Now. In order to support and serve these non-profit community organizations, Tabu regularly holds fundraisers.

With its weekly showings of burlesque shows, drag shows and comedy shows, as well as countless other performances, Tabu has made a name for itself as a definite supporter of the community. The bar prides itself in being, “a place where everyone is welcome, where everyone feels comfortable, where everyone wants to bring their mom or dad.”

Turning around to walk back past Cafe Twelve and towards 12th and Locust, another Gayborhood-famous location sits. At the corner of 12th and Locust streets, at 225 S. 12th St, sits Knock Restaurant and Bar. Knock, a local favorite for lunch and dinner, is owned and operated by the same brothers who opened Woody’s – Bill and Steve Wood. They set Knock in the heart of the Gayborhood as a restaurant to serve American cuisine in a more chic setting.

Continuing to head the other way from Café Twelve, across Locust Street to Manning Street, you’ll find bright colorful rainbow flags alongside American flags and a Philadelphia Gay News box. You’ve arrived at 254 S. 12th St. to find ICandy, one of the Gayborhood’s popular nightclubs. For most of the residents, it’s another place to hang out in the community and catch up with friends.

For people who live outside of the Gayborhood, ICandy is a place to go and get a sense of the community and it’s residents. There are many forms of entertainment here. On Mondays, ICandy and Aloe Vera host RuPaul’s Drag Race, a competition with mini-games and prizes based on the best Drag Queen.

The David Acosta Revolutionary Leadership Award is presented to a member of the Latino lesbian, gay, bisexual and transgender community who displays the same revolutionary leadership as the founder of the award, David A. Acosta. [continue reading…]

Being transgender in Philadelphia is still something that incites violence and discrimination, but not nearly as much as it used to, according to Elizabeth Coffey Williams. “I lived the white-picket fence, husband, dog, swimming pool [continue reading…]