Philadelphia Police Captain Frank Palumbo listened to a woman explain how an unlicensed bar is eroding the quality of life in Oxford Circle.

“Why is it so difficult to get these illegal clubs shut down?” asked the woman, who requested she only be identified as a member of the Oxford Circle Civic Association out of fear of retribution.

“We will handle this immediately,” Palumbo said of the alleged club in the basement of a building at 6053-55 Castor Ave. “I’m going to get city-wide vice involved because they handle speakeasies.”

The club used to be known as the Circle Club but now goes by Club Garage, according to Larry Genetti, treasurer of the 2nd Police District Advisory Council (PDAC), which met last night.

The alleged club was one of a few issues that were discussed at the meeting.

Illegal Truck Parking
“I’m all about people having their own businesses,” said Brett Bolden, an Oxford Circle resident. “But when you have six work vans taking up half the parking on a street, that’s a problem.”

Bolden says the illegal truck parking occurred on the 5900 block of Alma Street. 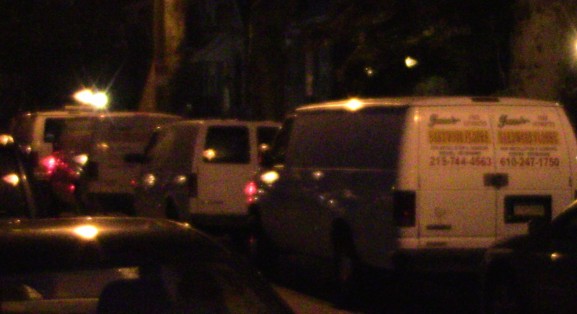 Chapter 12-901 of Philadelphia’s parking law states that no commercial vehicle can be parked “on any street within one hundred feet of any [residential] property” overnight. However the ordinance exempts “[vehicles] not in excess of one-half ton [capacity].”

Ford Motor Company considers its F-150 vans to be one-half ton capacity. The F-250 and above are considered to be more than one-half ton.

Pictures taken on the block immediately after the meeting and the next day show several commercially labeled Ford vans parked in the street. Three of the vans were F-250s. The fine for a violation is $101.00.

Councilman Brian O’Neill introduced a bill in council that would allow Cafe Italiano, at 1871 Cottman Ave., to establish a sidewalk cafe. Residents opposed the bill by a vote of 12-0.

Residents cited potential noise problems with the business, which is located across the street from Woodrow Wilson Middle School.

“I’m across the school yard from there,” Larry Genetti said. “If they got tables sitting out front and they’re making a lot of noise, I’m going to know it.”

“Nobody told me about it,” Larry Genetti said. “There are residential apartments above each of the stores. They were not contacted. Brian O’Neill never contacted Rhawnhurst Civic Association.”

But Cafe Italiano owner Pano Leka said the lack of information went both ways. With the help of an interpreter, Leka said he was not notified his zoning variance application was up for a vote at the 2nd PDAC. He also disagrees with PDAC member’s objections.

“There won’t be any noise,” said Leka. “There’s no music here, no band, nothing.”

Councilman O’Neill did not respond to a request for comment. Council sent the bill to the Committee on Streets and Services on June 11.

– Text and images by Jeff Neiburg and Bob Stewart.

“The dream will come true.” Those were the words of Bustleton Bengals Club gym director Vince Tarducci when describing the long process it had taken him and members of the Gym Committee to finally amass [Read More]

If there’s anything that ties residents of Northeast Philadelphia together, it’s the love of food and family. That same concept is what keeps some of Mayfair and Rhawnhurst’s long-standing bakeries in the hearts of their communities. Bakeries [Read More]