What do you get when you take a passion for beer, a knack for business and a hardworking staff? Dock Street Brewing Company, of course. Located at 50th Street and Baltimore Avenue, the pub holds its own in the busy area by being an ever-changing spot for brew-lovers. Owner Rosemarie Certo (above) said she keeps the business flowing smoothly by making sure customers leave with a smile on their face.

When it comes to a typical day at Dock Street, there is really no such thing for Certo. 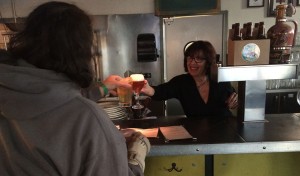 “The worst part of a typical day is all of the paperwork that’s involved,” she explained. “Otherwise, there is no typical. I think part of the beauty is when you’re doing the kind of work that we do, which is creating beers, we’re always thinking, brewing, creating events, educating or doing a lot of tours.”

After immigrating to the United States from Sicily, Certo got into brewing ale because of her family background. Her relatives used to grow grapes and make olive oil from their own olive trees. Making things by hand has always been a part of her nature. She originally opened the business with a partner, but later decided to take the craft brewing business into her own hands, relocating her brewery to West Philly.

“I love the environment because there’s all kinds of people who exist here,” Certo said. “I realized that this neighborhood really represents America at its best.”

Although it may seem like an owner’s job never ends, the staff at Dock Street work as a team to make sure everything is in order for their constant flow of customers. Vice President Marilyn Candeloro helps organize events to keep Dock Street busy and fresh, even for the most regular visitors.

“We have a range of all types of customers,” Candeloro explained. “We try to keep it really inventive. At the end of the day, it’s just about having fun, so we constantly have to think of new things to do. That’s what keeps us going.” 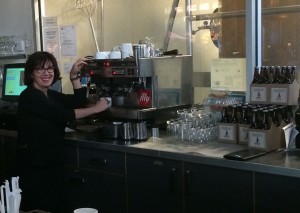 Events aside, the highlights for many loyal Dock Street visitors are the new and unique beer creations. Members of the staff work together to incorporate different ingredients and concepts into their beers.

“It’s a collaborative effort, and we take turns,” Candeloro said. “Whatever seems to fit at the right time, that’s what we go with. We’re very open and fun about how we come up with our beer.”

A lot of work goes on behind the scenes of the brewery to get the final product. Dock Street brewery even has its own family element, with Certo’s son, Sasha Certo-Ware, working as the brewing assistant and sales director.

“I do a little bit of everything,” Certo-Ware said. “Half of what I do is spreading the word about our beer. The other half of the time, I’m working in our brewery.”

Collaborating with the head brewer, Certo-Ware even came up with the brewery’s new beer, “Walker,” which is based on the hit AMC show The Walking Dead, and has been popular among patrons.

Though the drinks are definitely a highlight for customers at Dock Street, the food should not be overlooked. There is an extensive menu to complement the beer list. Head Chef Philip “PJ” Freeman said customer favorites are the Firehouse burger and essentially all of the pizza. 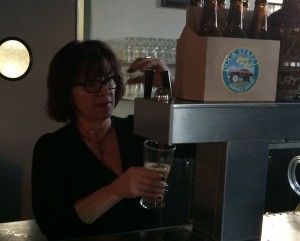 “Every pizza in here is sold a lot,” Freeman said. “We’re going to see every pizza every day.”

One Dock Street server, Joe Haas, said the customers are just as important to the brewery as the brewery is to them.

“This is seen as a local watering hole for a lot of people,” Haas explained. “It supports the local community, and this is the cornerstone of the neighborhood.”

With the support of her staff, Certo has been able to continue her dream of owning and running her own brewery. 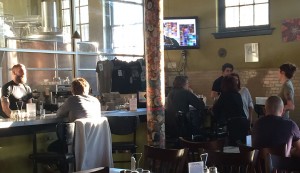 “I don’t think there are too many brew pubs that are like this, because it’s really grassroots. Some of them are chains, and they’re making good food and good beer, but they’re different than we are,” Certo said. “I think that we’re the real thing. This is the way that beer should be made and should be served, and I love what we do. It really reflects all of our philosophies.”

The highlight of it all, Certo said, is the positive response from customers.

Text, video and images by Courtney Burrell and Shauna Cottle

The number of American breweries is at a record-breaking high since the first breweries set up shop in 1887. Not far behind California—the state with the most breweries—is Pennsylvania, which tied with Wisconsin in 10th place [continue reading…]

Founded on the values of respect, diversity and collaboration, Camp Sojourner, the Girls’ Leadership Camp has continued to provide young girls from the ages of 8 to 17 with the tools to be well-rounded individuals. [continue reading…]